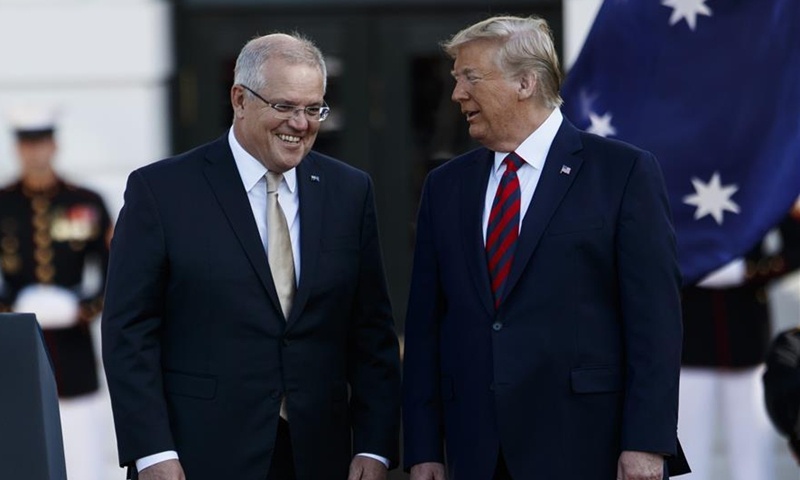 Australian-initiated provocation and confrontation are the "root cause" of its deteriorating relations with China, and Australia is undermining other countries' interests in the name of safeguarding its own interests, said Chinese Foreign Ministry spokesperson Zhao Lijian on Thursday, rebuking Australian Prime Minister Scott Morrison's response to Beijing's list of 14 grievances as Canberra's interference in its domestic affairs.

Yu Lei, the chief research fellow at the Research Center for Pacific Island Countries at Liaocheng University, told the Global Times on Thursday that there may not be a serious rethinking of China-Australia relations among Australian politicians until next June, and Australia's China policy will depend on the new US administration.

China-Australia relations are a matter between China and Australia, and should not be interfered by a third party - the US - which will misguide Australia's policymaking, Chen Hong, director of the Australian Studies Center at East China Normal University in Shanghai, told the Global Times on Thursday.

Zhao said at the routine press conference on Thursday that mutual respect is a basic principle in handling bilateral relations. China is firmly opposed to imposing one's own ideas and will on others under the pretext of safeguarding national interests and values.

Zhao also stressed that Australia should face the crux of the current setback in bilateral relations, take China's concerns seriously, and take concrete actions to correct its mistakes.

Zhao's remarks came after Morrison on Thursday dismissed the claim that Australia acted at the behest of the US in crafting its foreign policy, after being accused of poisoning bilateral relations in a diplomatic briefing.

"That's nonsense," he told the Australian media Seven Network on Thursday,   Australia is a sovereign country. We make our own decisions according with the national interests," Morrison said.

The list of grievances reportedly includes Australia's calls for an inquiry into the origins of COVID-19, interference in the South China Sea disputes, groundless accusations that China is behind cyberattacks, and banning Huawei from the rollout of 5G in the name of security concerns.

The list reflects China's candid and open communication with Australia, but was smeared by Australian and other Western media as an "incendiary" accusation, Chen said.

Chen noted that the list serves the purpose of reaching mutual understanding as China sincerely expressed its concerns to Australia.

Media said it was the first time the Australian treasurer was inserting himself in the China debate in a substantial way.

Frydenberg seems to hold an opposite view from Morrison on China-related issues, which Chinese experts called rational and encouraging.

However, the experts warned such rational voices are very few in today's Australian government.

Chen called Frydenberg's remarks a "glimmer in the dark" amid frosty China-Australia ties.

The Morrison government is "psychologically prepared" for the consequences in terms of the loss in its trade and economy under its anti-China policy, as the policy is the result of a balance of power of major domestic parties, and senior Australian political figures could not hold a high post without colluding with the US, Yu said.

Some Australian politicians believe some losses are necessary to contain China and gain the goodwill and rewards from the US, Yu said, noting this is the consensus of the West.

With the series of provocative actions by Australia targeting China, Australia is losing its market among Chinese businessmen, tourists and students, turning itself into an "isolated island" in the globalization trend, experts said.