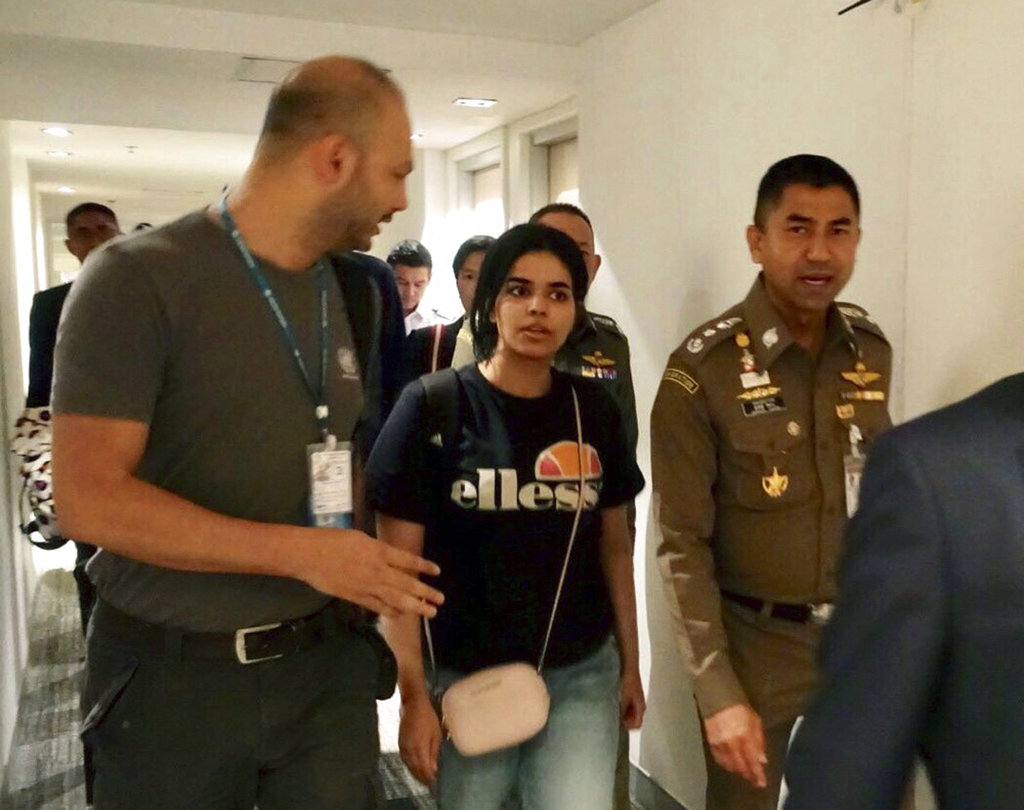 Australia will assess runaway Saudi woman Rahaf Mohammed Alqunun for settlement after the United Nations on Wednesday deemed her a refugee.

The Department of Home Affairs confirmed in a statement that the U.N. High Commissioner for Refugees had referred 18-year-old Alqunun to Australia for consideration for refugee settlement.

Alqunun arrived in Bangkok on a flight from Kuwait on Saturday, and planned to continue to Australia, for which she held a tourist visa. But after being detained by Thai authorities, she refused to board a flight back to Kuwait, barricading herself in a hotel room.

After publicizing her case via social media, saying she feared for her safety if made to return home to her family, she was placed in the care of UNHCR workers as her bid for refugee status was considered, leading to her referral to Australia on Wednesday afternoon.

"The UNHCR has referred Ms Rahaf Mohammed Alqunun to Australia for consideration for refugee resettlement," Australia's Home Affairs Department said, adding it would "consider this referral in the usual way, as it does with all UNHCR referrals."

Indications from Canberra suggest Alqunun may receive a sympathetic hearing.

Before the UNHCR's referral, Health Minister Greg Hunt said Australia would consider giving Alqunun a humanitarian visa if the UNHCR process found her to be a refugee.

"Pending the outcome of that, if she is found to be a refugee, then we will give very, very, very serious consideration to a humanitarian visa," he told the Australian Broadcasting Corp.

Alqunun's case has again highlighted the cause of women's rights in Saudi Arabia. Several female Saudi runaways fleeing abuse by their families have been caught trying to seek asylum abroad in recent years and returned home. Human rights activists say many more similar cases will have gone unreported.

In Bangkok, Thailand's immigration police chief Maj. Gen. Surachate Hakparn said that Alqunun's father and brother arrived together in Bangkok on Tuesday but Alqunun refused to meet them.

Surachate discussed her case on Tuesday with Saudi Charge d'Affaires in Thailand Abdalelah Mohammed A. Alsheaiby. In a video clip of the meeting released by Thai immigration police, Alsheaiby is heard telling Thai officials: "From the moment she arrived, she opened a new account and her followers reached almost 45,000 in a day . And I would have preferred it better if her phone was taken instead of her passport."

The comments sparked anger on social media . Surachate said that police could not confiscate her phone because she was not being detained and said that the Saudi diplomat's remark was "just an opinion" and "nothing to be taken seriously".

After Alqunun barricaded herself in her Bangkok hotel room, her pleas for help over Twitter garnered tens of thousands of followers, and the attention of the UNHCR. Public pressure prompted Thai officials to return her passport and let her temporarily stay in Thailand.

Alqunun alleged several times that Saudi officials were involved in seizing her passport. However, in repeated statements, including one issued Tuesday, the Saudi Embassy in Bangkok said it was only monitoring her situation.

Its latest statement, which described Alqunun's case as a "family affair," said Saudi Arabia did not demand her deportation back home. The embassy — and Thai officials — earlier also said that Alqunun was stopped by Thai authorities in Bangkok because she did not have a return ticket, a hotel reservation or itinerary to show she was a tourist, which appeared to have raised a red flag about the reasons for her trip.

Saudi Arabia's wider human rights record has also come under intense scrutiny since the killing of Saudi writer Jamal Khashoggi in October. Khashoggi, who wrote critically of Crown Prince Mohammed bin Salman in columns for The Washington Post, had been living in self-imposed exile before he was killed and dismembered inside the Saudi Consulate in Istanbul by Saudi agents.

The kingdom offered various shifting accounts of the circumstances of his death before eventually settling on the explanation that he died in a botched operation to forcibly bring him back to Saudi Arabia.