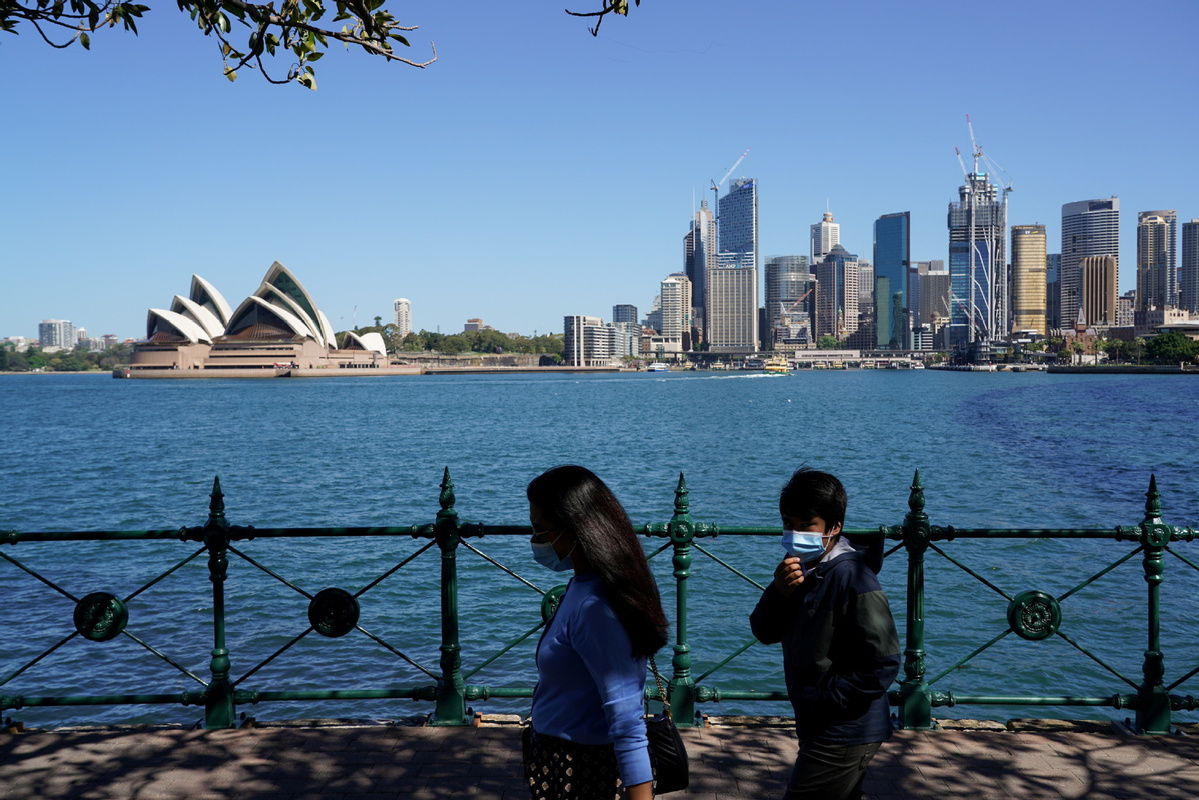 People in protective face masks walk along the harbour waterfront across from the Sydney Opera House during a lockdown to curb the spread of coronavirus disease (COVID-19) outbreak in Sydney, Australia, on Oct 6, 2021. [Photo/Agencies]

Australia loves to tell the world that it is doing its bit to help Pacific island nations combat the impact of climate change, but a report by an environmental group offers a totally different story.

For the report titled "Pacific Bully and International Outcast: How Australia's climate policies isolate it and the Pacific and the world", Greenpeace interviewed scientists and former Pacific island leaders.

In its conclusions it accuses Australia of "greenwashing" its international climate finance commitments, claiming credit for aid projects only tangentially related to climate change, and using funding to bully Pacific neighbors into silence on climate change.

The former prime minister of Tuvalu, Bikenibeu Paeniu, said Australia's position on climate change "has not changed and may even be getting worse" when it comes to action in support of the Pacific island countries.

"Australia's tactic of manipulating the position of the Pacific island countries on climate change through the Pacific Islands Forum, the Pacific Community, the South Pacific Regional Environment Programme and the rest of regional smaller institutions, has not changed to this day," the report quotes Paeniu as saying.

Much of Australia's financing in the past has had little or no link to climate change, Greenpeace said.

Australia made a similar commitment at the Pacific Islands Forum in Tuvalu two years ago, promising that Australia "will remain a champion of the environment and ensure the Pacific remained economically stable and sovereign politically".

Anote Tong, the former president of Kiribati, is quoted in the Greenpeace report as saying that Pacific island leaders had been expressing concerns for many years about the changing climate.

"However, their voices were quickly smothered under the very intensive lobbying efforts of the powerful fossil fuel industry to invalidate the science."

Pacific leaders have, over the past 20 years, consistently drawn attention to the existential threats faced by those living in the region, especially those in the low-lying atoll islands.

Tong is quoted as saying: "Many aid projects described as climate related do not improve the climate resiliency of Pacific peoples. For example, a 2013 Australian funded road project in South Tarawa, Kiribati, has since become damaged by erosion and is flooded during king high tides, yet this project was tagged as 'significantly focused' on climate adaptation."

The report, published during the just concluded COP 26 climate conference in Glasgow, said the projects with the highest levels of funding had at best a tangential link to climate change and at worst no clear link. "Indeed, many of the long descriptions of the projects contained no reference to the climate or environment."

"Australia has lost its once-respected position in the Pacific and now has a reputation for bullying and strong-arm diplomatic tactics to thwart regional climate action.

"Pacific island leaders are some of the world's strongest climate advocates, but Australia has brazenly tried to buy their silence through aid with strings attached."

Australia "has a history of using bilateral aid as a way of gaining leverage over Pacific island countries", she said. "It would be nice to see Australia being a good international citizen and showing support for multilateral climate finance such as the UN's Green Climate Fund. (But) it refuses to do so."

Australia has said that its funding will be directed to projects in the Indo-Pacific rather than distributed through the Green Climate Fund.

Terence Wood, a researcher at the Development Policy Center of the Australian National University in Canberra, said Australia spends less than 1 percent of its federal budget on aid.

In that respect "Australia looks rather stingy" by the standards of the Organization for Economic Cooperation and Development, he said.