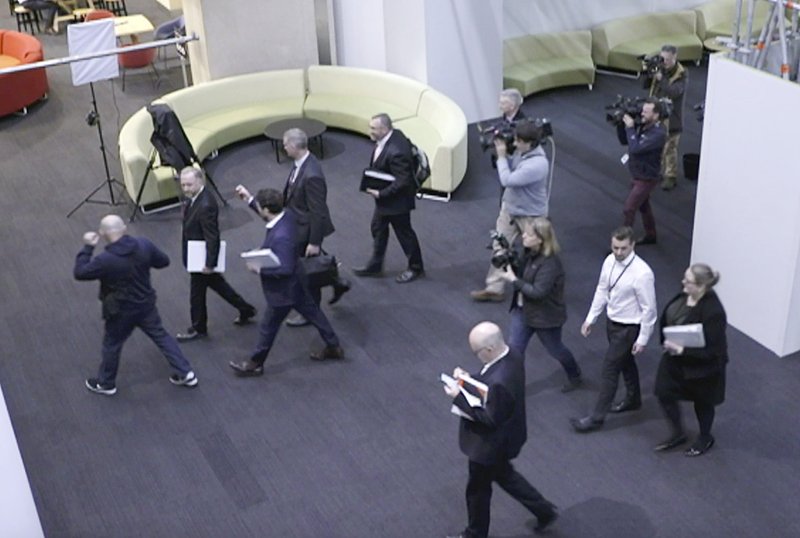 In this June 5, 2019, file image made from video, Australia's Federal Police, top, enter the Australian Broadcasting Corporation, the national public broadcaster, during a raid on their offices in Sydney, Australia. (Photo: AP)

Australia’s three largest media organizations joined forces on Wednesday to demand legal reforms that would prevent journalists from risking imprisonment for doing their jobs. The demands came after unprecedented raids against media organizations by police searching for leaked documents that some say were deeply embarrassing to the government.

News Corp. Australia, Australian Broadcasting Corp. and Nine Entertainment made their demands after raids by federal police on consecutive days earlier this month at ABC’s Sydney headquarters and a News Corp. reporter’s Canberra home in search of secret government documents.

The rival organizations want journalists to be exempt from national security laws passed since 2012 that “would put them in jail for doing their jobs.”

They also want a right to contest warrants such as those executed in Sydney and Canberra. Both the ABC and News Corp. this week lodged court challenges to both those warrants in a bid to have documents returned.

The organizations have called for greater legal protections for public sector whistleblowers as well as reforms to freedom of information and defamation laws.

“Clearly, we are at a crossroads. We can be a society that is secret and afraid to confront sometimes uncomfortable truths or we can protect those who courageously promote transparency, stand up to intimidation and shed light on those truths to the benefit of all citizens,” Anderson said.

Miller described the police raids that have united media organizations in their demand for change as “intimidation, not investigation.”

“But there is a deeper problem — the culture of secrecy,” Miller said. “Too many people who frame policy, write laws, control information and conduct court hearings have stopped believing that the public’s right to know comes first.”

Marks said “bad legislation on several fronts and probably overzealous officials ... in the judiciary, in the bureaucracy and our security services have steadily eroded the freedoms under which we, the media, can operate.”

“Put simply, it’s more risky, it’s more expensive to do journalism that makes a real difference in this country than it ever has been before,” Marks said.

The demands come a week before Parliament resumes for the first time since the conservative government was elected for a third term on May 18.

Prime Minister Scott Morrison has not criticized the police raids, but has said he is open to suggestions for improvements to Australia’s laws.

Denis Muller, from the Melbourne University Center for Advancing Journalism, said the three organizations had identified “real flaws” in the laws and said their united front would put pressure on the government.

“The government is going to be kicking and screaming every inch of the way with this because they will be getting very severe pushback from the bureaucracy, from the Federal Police, from the intelligence services,” he said.

Australia is the outlier among its Five Eyes intelligence-sharing partners the United States, Britain, Canada and New Zealand in not having oversight to balance press freedom with national security.

“We’re the only ones without any sort of formal protection of freedom of the press and we are the ones that have basically enacted the most oppressive national security regime,” Muller said.

Experts say Australia went from having no counterterrorism laws before the Sept. 11, 2001, attacks in the US to having more than any other country in the world, with more than 60 new pieces of legislation and amendments. There had been no counterbalancing laws to uphold human rights or press freedom.

Australia doesn’t have enshrined rights like the US First Amendment guarantee of free speech.

Yet the World Press Freedom Index rates Australia at 21, higher than the United States at 41.

Former army lawyer David McBride will appear in a Canberra court on Thursday on charges relating to the leaking of classified documents about Australian Special Air Service involvement in Afghanistan to ABC journalists. The leak was related to the police raid on the ABC.

The ABC reported in 2017 on growing unease in the Australian Defense Force leadership about the culture of special forces, and that Australian troops had killed unarmed men and children.

McBride told reporters two weeks ago that his prosecution was not about protecting national security but concealing “a national shame.”

The police raid on the home of Annika Smethurst, the political editor of Sydney’s The Sunday Telegraph newspaper, focused on a 2018 story detailing an alleged government proposal to spy on Australian citizens, which cannot currently be done legally.

No arrests were made as a result of either raid.