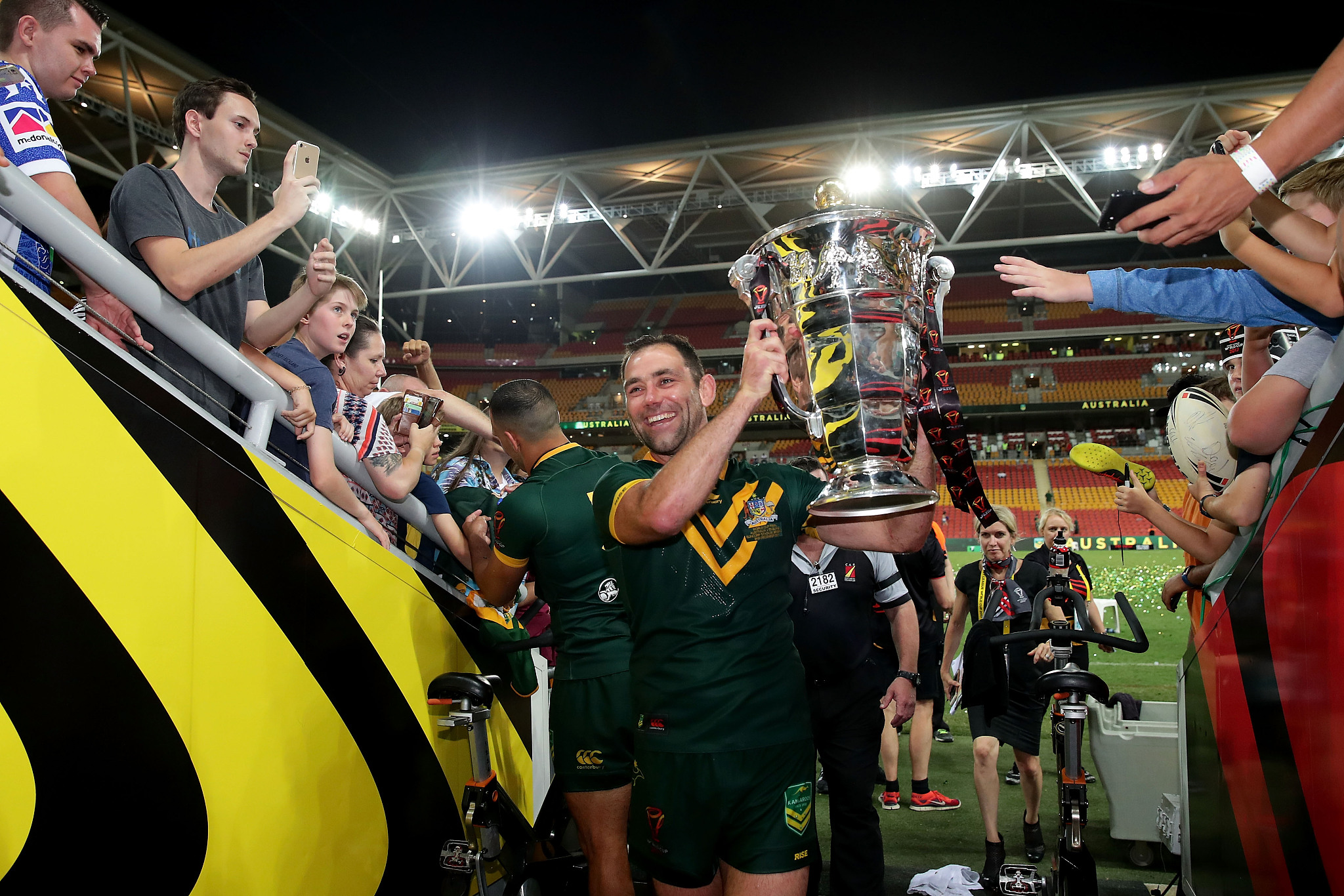 The decision by Australia and New Zealand to pull out of the 2021 Rugby League World Cup over COVID-19 concerns rocked tournament organizers on Thursday, with the chair of International Rugby saying some players may now switch allegiance so they can play in the showpiece tournament.

Rugby league's top two ranked nations cited "player welfare and safety" during the coronavirus pandemic as compelling reasons to delay the event until next year.

They said their decision to withdraw came after considering the risk of infection in England, the worsening coronavirus environment in Australia and the time most players would be away from home under strict biosecurity conditions before the World Cup.

Their joint statement took tournament organizers Rugby League World Cup 2021 by surprise as it came just a week after they confirmed the World Cup would go ahead as planned.

International Rugby League chair Troy Grant said he found it difficult to find the words that "adequately describe my disappointment with that decision", as officials scrambled to work out whether a World Cup without Australia and New Zealand was still a "viable option".

Grant insisted the safety of players and officials had always been the priority and that World Cup organizers had "met every request regarding this issue made of us by ARLC (Australian Rugby League Commission), New Zealand Rugby League (NZRL) and the Rugby League Players Association (RLPA)".

Grant added his talks with players' associations had convinced him a number of dual-qualified Australia and New Zealand stars still wanted to feature at a World Cup.

"They have expressed to me that they feel their own personal choice to participate or not in the World Cup has been taken from them," he said.

"The RLPA have again committed to continue to work with IRL and the local organizing committee towards a 2021 tournament including Australian and New Zealand players who have dual eligibility and who are now keen to play for other nations."

"Not participating in this year's World Cup is not a decision the Commission has taken lightly, but we must put the best interests of our players and officials first.

"In the current environment, the risks to the safety, health and well-being of the players and officials traveling from Australia to participate in the tournament this year are insurmountable."

"But the COVID-19 situation in the UK shows no sign of improving, and it's simply too unsafe to send teams and staff over," he added. 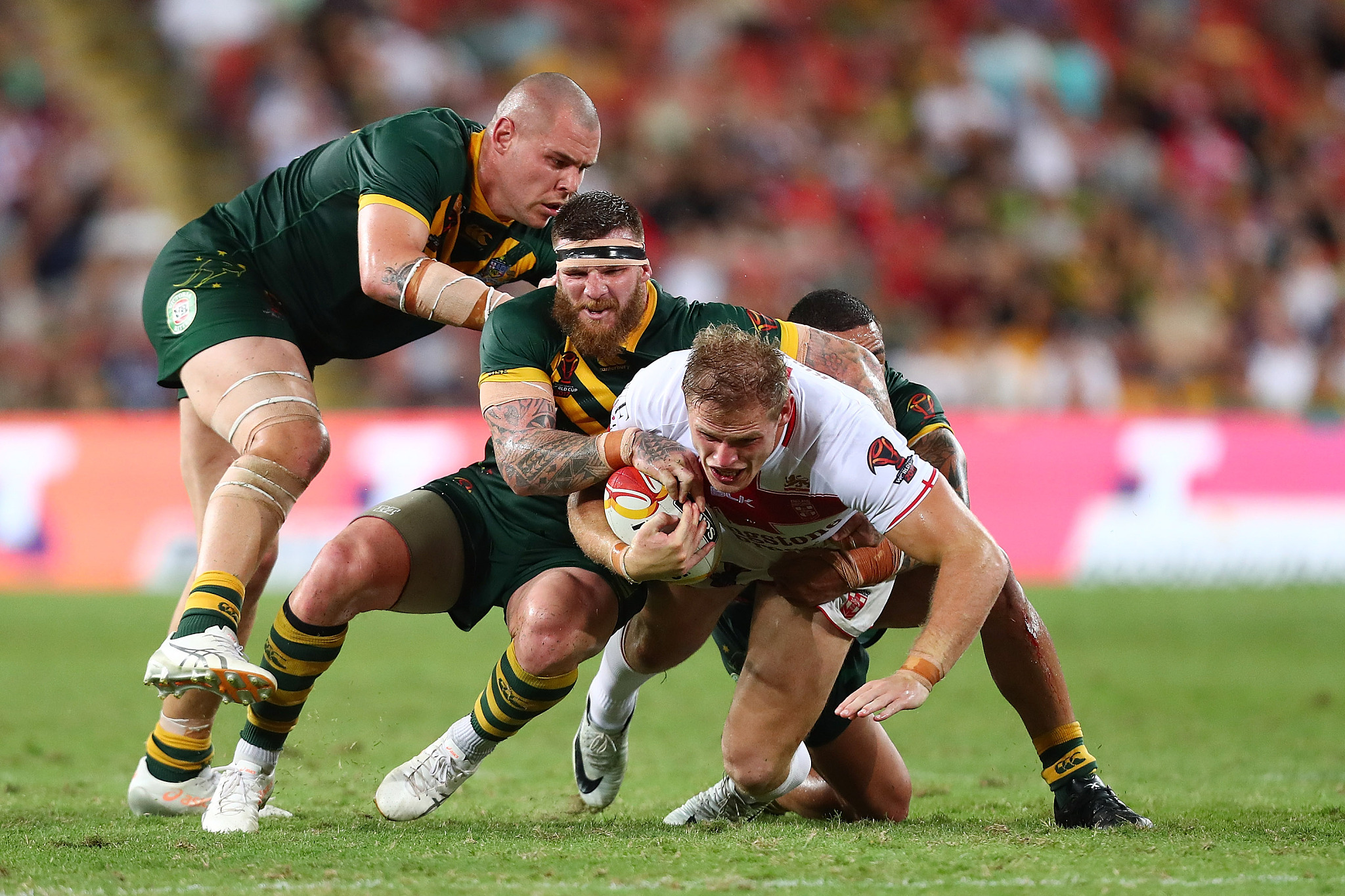 Thomas Burgess of England is tackled during the Rugby League World Cup final between Australia and England at Suncorp Stadium in Brisbane, Australia, December 2, 2017. (Photo: CFP)

That provoked a furious response from the chairman of England's Rugby Football League, Simon Jordan, who accused his Australia and New Zealand counterparts of a "selfish, parochial and cowardly decision".

Jordan also told Britain's PA news agency their stance was in marked contrast to how other sports in Australia and New Zealand were still playing away from home despite the threat of COVID-19.

"I would have some sympathy for them were I not aware that right now Australian athletes are in Tokyo for the Olympics, that New Zealand men's cricketers have played in England this summer and that the rugby union team from Australia will be coming for a series of internationals in October," he said.

The World Cup is scheduled to begin on October 23, with reigning champions Australia meant to play Fiji in Hull and New Zealand facing Lebanon in Warrington 24 hours later.

The tournament is a major source of revenue for the International Rugby League, the sport's governing body, and has been supported financially by the British government which is looking to reopen its borders.

If it was put back to 2022, it would be competing with the Women's European Football Championships, also in England, and would clash with media coverage of the FIFA World Cup in Qatar.

Only three nations have won the Rugby League World Cup, with Australia the dominant force having been crowned champions 11 times.

Great Britain have won three times, and New Zealand once.