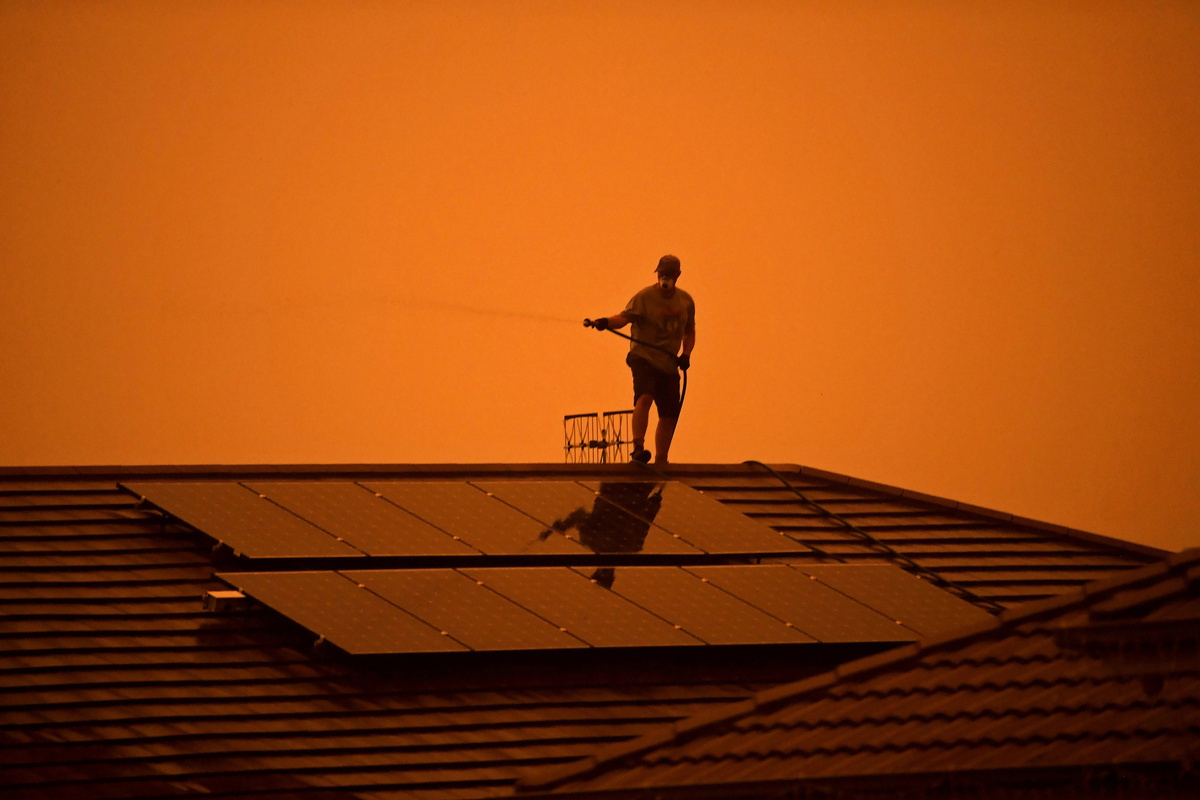 FILE PHOTO: A resident uses a garden hose to wet down the house as high winds push smoke and ash from the Currowan Fire towards Nowra, New South Wales, Australia January 4, 2020. (Photo: Agencies)

SYDNEY - Fire crew of the states of New South Wales (NSW) and Queensland in eastern Australia are on alert of bush fire as extreme heatwave hit the region.

A total fire ban, which means no fire may be lit in the open and all fire permits are suspended, is in place for the north western and northern slopes areas on Monday with very high fire danger, according to NSW Rural Fire Service (RFS).

The severe heat combined with hot winds created volatile conditions for the bush fire and a busy weekend for the firefighters and aircraft. A property in Northmead to the west of Sydney was damaged without casualties.

Local media reported on Sunday that RFS crews have been battling more than 100 fires between the Victorian and Queensland borders in the last 48 hours.

With temperature dropping on Monday, the bushfire incidents across NSW reduced to 50 around 3:00 p.m. local time, none of which were more severe than advice level. However, the authority still warned people of complacency.

"Although conditions are more favorable elsewhere, we are likely to see elevated fire danger across many parts of NSW return tomorrow," RFS tweeted on Monday.

In the neighboring state of Queensland, guests were evacuated from a popular resort on Monday morning as bushfire continued in the world heritage Fraser Island and moved towards the resort. The fire, reported to be sparked last month by an illegal campfire, has been burning for six weeks and has destroyed more than 40 kilometers of bushland.

Queensland Fire and Emergency Services (QFES) said in a statement on Monday afternoon that the fire is still burning in several locations. Weather conditions continued to exacerbate fire and smoke conditions. Smoke will affect visibility and air quality on the Fraser Island and adjacent mainland areas over the coming days.

QFES and Queensland Parks and Wildlife Service in conjunction with the Butchulla Aboriginal Corporation are working to limit the spread of the fire and minimize environmental and cultural impacts. Water bombing aircraft will continue to support fire ground actions. Traveling to the island remains restricted.

The Bureau of Meteorology (BOM) also warned of continued fire danger in the southern and eastern Australian states as the record-breaking heatwave will continue in the coming days.

"Severe to extreme heatwave conditions are expected across much of southern Queensland and northern NSW over the coming days. With the heat peaking in southern inland Queensland today, inland NSW on Tuesday and southeast Queensland and northeast NSW on Wednesday, severe fire dangers are forecasted across much of southern Queensland, inland NSW and northern Victoria on Tuesday as winds increase and maximum temperatures reach 10 to 18 degrees above average," meteorologist Dean Narramore told a briefing on Monday.