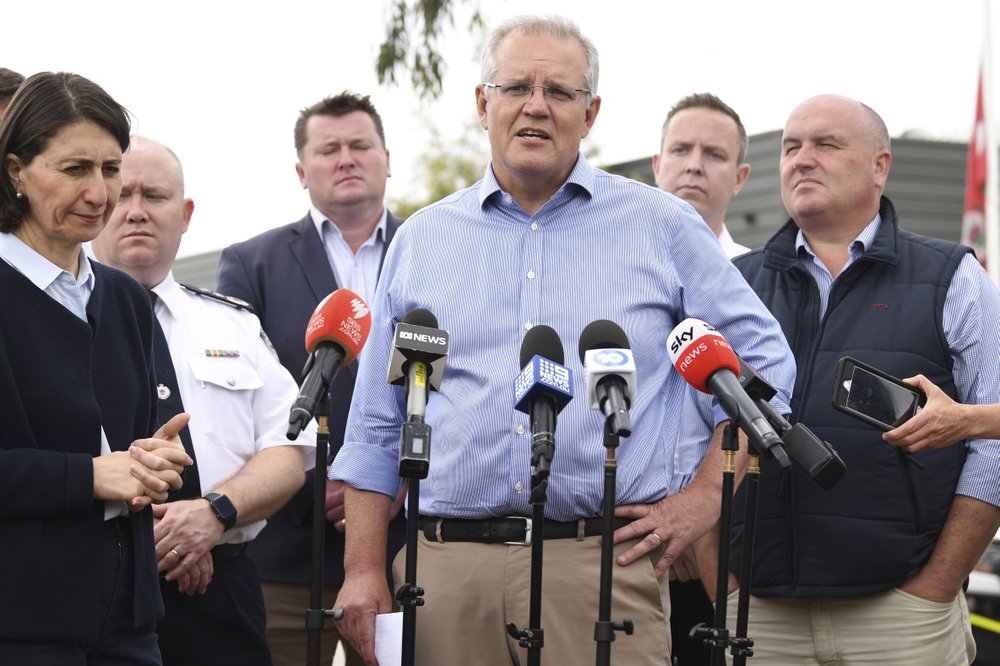 Morrison cut short a vacation with his wife and adult children amid public anger at his absence during a national crisis, and arrived home Saturday night. He spoke to reporters Sunday morning while visiting the headquarters of the Rural Fire Service in Sydney.

“If you had your time over again and you had the benefit of hindsight, we would have made different decisions,” Morrison said. “I am sure Australians are fair-minded and understand that when you make a promise to your kids you try and keep it.”

Morrison said this was not a time for political point-scoring, but a “time to be kind to each other.” He said that while he is not a trained firefighter, “I’m comforted by the fact that Australians would like me to be here just simply so I can be here, alongside them, as they are going through this terrible time.”

Morrison also answered critics who say his government has not done enough to fight climate change, which has been cited as a major factor in the spate of fires burning across the states of New South Wales, Victoria and South Australia. He said there were also “many other factors” responsible for the unprecedented number of fires during a record-breaking heat wave.

“There is no argument ... about the links between broader issues of global climate change and weather events around the world,” he said. “But I’m sure people equally would acknowledge that the direct connection to any single fire event — it’s not a credible suggestion to make that link.”

The fast-moving fires scorched trees, cars, outbuildings and everything else in its path, leaving residents scrambling to find shelter.

“When it came, it came in like three or four minutes, just a big plume of black smoke and then ember fallout,” recalled Steve Harrison, a resident of the village of Balmoral. In an interview with ABC, Harrison described how he frantically tried to turn on the sprinklers on buildings in his property on Saturday but within minutes he found himself trapped, unable to escape.

“My garden was already on fire here. And the driveway was on fire, and the road was on fire. So I realized I couldn’t evacuate,” Harrison said. He said he had to turn to his plan B: Hiding in a small kiln, just the size of a coffin, that he had built the day before. It was just big enough for him to crawl inside, he said.

“I hid in there for half an hour while the firestorm went over,” he said.

The village of Balmoral, southwest of Sydney, has been all but wiped out by the Green Wattle Creek firestorm that roared through the area twice in three days.

Dozens of homes have been lost since Thursday in massive wildfires, including the Gospers Mountain blaze, which covered more than 460,000 hectares (1.1 million acres).

Thirty firefighters from Canada and nine from the United States were among fresh crews set to join the battle against the fires on Sunday.