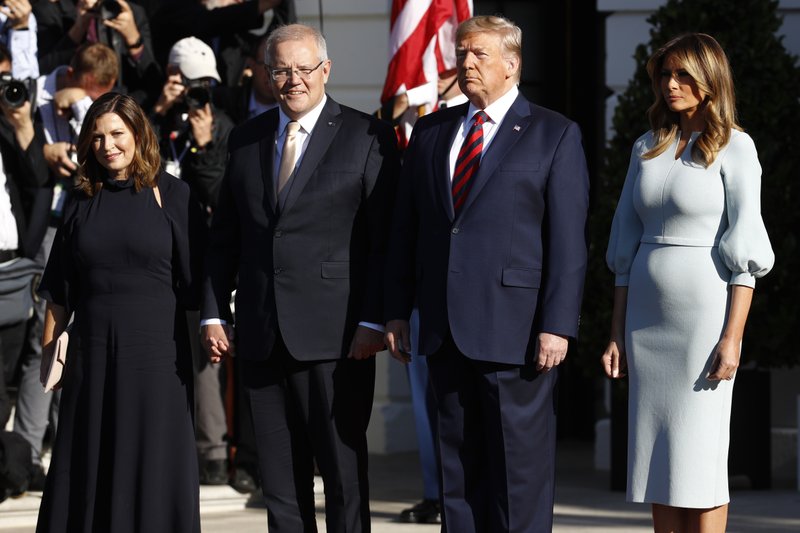 Hundreds gathered under clear blue skies for the welcoming ceremony as children waved miniature Australian and U.S. flags. The ceremony included Marine band performances of the national anthem of both countries and a 19-gun salute and inspection of troops.

Morrison is just the second world leader to be granted the high diplomatic honor of a state visit during the Trump administration.

The leaders will meet for talks and face journalists at a joint news conference in the White House East Room. Morrison will also be treated to lunch at the State Department.

They will cap the night with an opulent state dinner beneath the stars in a Rose Garden arrayed in shades of green and gold in tribute to his Australia's national colors.

The first lady released some key details, but is withholding the guest list and details about her gown until just before the festivities get under way.

Scores of guests will dine on a sunchoke ravioli starter, Dover sole entree and apple tart a la mode served on a mix of round and rectangular tables decked out in shades of yellows and green in tribute to Australia's national colors, Mrs. Trump's office said late Thursday before journalists were in to see the decor. Temporary flooring has been laid over the grass in the famous garden.

Dinner centerpieces feature more than 2,500 roses from California in shades of yellow, and Australia's national flower, the golden wattle, while the garden will be decorated with white and yellow roses. Musical groups from the U.S. military will provide the after-dinner entertainment.

As he arrived in Washington on Thursday night, Morrison said he looked forward to celebrating 100 years of "mateship" between the U.S. and Australia.

"There are many larger, I suppose, more powerful friends that America has, but they know that they do not have a more sure and steadfast friend than Australia," he told reporters who accompanied him to Washington. "And so I'm looking forward to spending time with our American friends here over the next few days and celebrating our tremendous relationship."

Trump and Morrison will spend part of Sunday together when they tour a new, Australian-owned manufacturing facility in Ohio.

Beyond socializing, the leaders plan talks Friday on military, intelligence and economic issues, focusing on the Indo-Pacific region. They intend to sign a memorandum of understanding to further U.S. and Australia cooperation in space, according to a senior administration official.

Trump and Morrison also will discuss how to ensure a stable market and supply of minerals known as rare earths, which are widely used in electric cars and cellphones, the official said. They will roll out programs for the countries to work together on recycling ocean plastics, which harm marine wildlife and fishing, said the official, who was not authorized to provide details of the meetings and spoke only on condition of anonymity.

Australian pro golfer Greg Norman, a friend and sometime golf partner of Trump's, told The Associated Press in a text message that he'll be among the invited guests. Republican Sen. Roy Blunt of Missouri is among Congress members who accepted a coveted invitation.

Lachlan Murdoch, CEO of Fox Corp., will attend, while his father, Australian-born media mogul Rupert Murdoch sits out this dinner, a Fox representative said. The elder Murdoch was a guest at the White House state dinner for Australia some 13 years ago.

When it comes to state dinners, Trump seems to prefer being on the receiving end.

Friday's will be just the second state dinner of Trump's administration, and the first in more than a year.