SYDNEY, Nov. 8 (Xinhua) -- The Australian state of Victoria, the worst-hit state by COVID-19 in the country, announced further easing of restrictions after it recorded the ninth straight day without any new cases or deaths on Sunday. 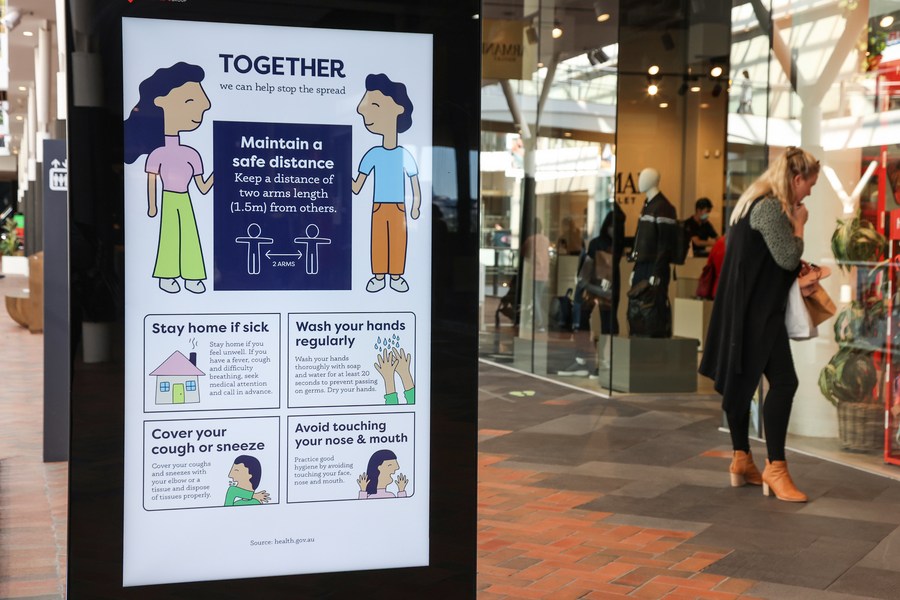 A notice of COVID-19 prevention measures is seen at a shopping mall in Sydney, Australia, on Aug. 6, 2020. (Photo: Xinhua)

From 11:59 p.m. on Sunday local time, the 25-km travel limit in the capital city of Melbourne and the hard borders separating the city from lower virus transmission communities in regional Victoria will be abolished, while the statewide compulsory mask-wearing rule remains in place until further notice.

From Monday, the whole state will follow the unified COVID-19 restriction rules which will further ease limits on gatherings for hospitality venues, indoor sporting facilities, religious ceremonies, and home visiting.

Community spaces such as libraries and neighborhood houses can have up to 20 people indoors, with groups of up to ten.

Indoor entertainment venues, such as movie theatres, galleries, museums and music halls will be able to open with 20 people per space.

Victoria recorded zero new COVID-19 cases and no further related deaths for the ninth day running, which brought the state's rolling 14-day average number of cases down to just 0.4 in metropolitan Melbourne and zero in regional Victoria.

Nevertheless, Premier Daniel Andrews still warned Victorians against complacency as the battle against the pandemic is not over yet.

"Reflecting the progress we've made, the State of Disaster will not be renewed. But because the virus is still very much with us, the State of Emergency will be extended until 6 December to allow the Chief Health Officer's directions to remain in force," he said in a statement.

According to the latest figure released by the Australian Health Department on Saturday, there were totally 27,652 cases and 907 deaths nationwide in the country.