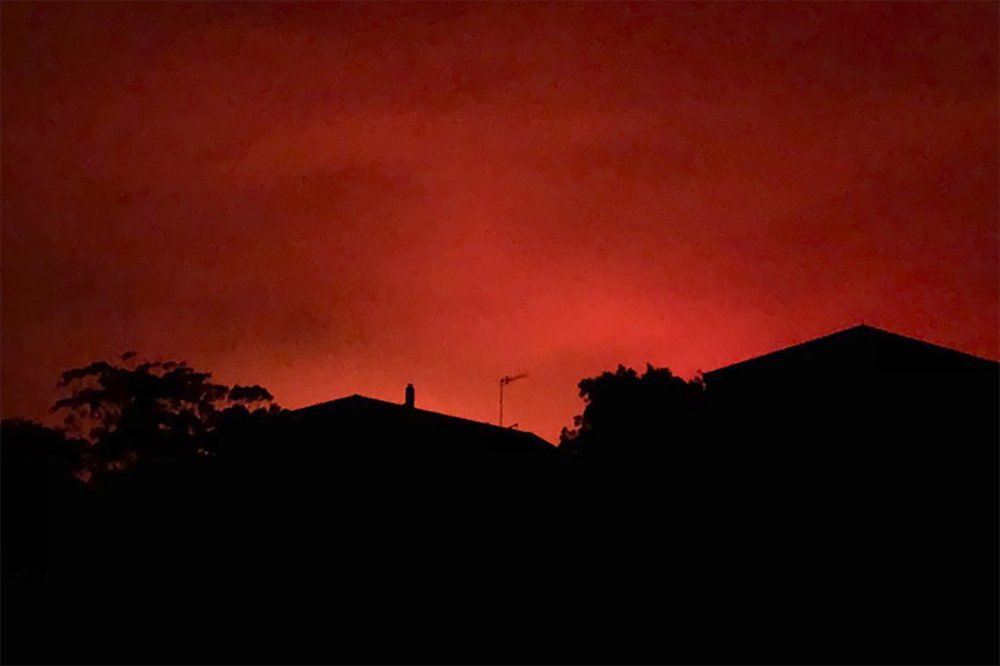 Australia deployed military ships and aircraft Wednesday to help communities ravaged by apocalyptic wildfires that have left at least 17 people dead nationwide and sent thousands of residents and holidaymakers fleeing to the shoreline.

Navy ships and military aircraft were bringing water, food, and fuel to towns where supplies were depleted and roads were cut off by the fires. Authorities confirmed three bodies were found Wednesday at Lake Conjola on the south coast of New South Wales, bringing the death toll in the state to 15.

More than 175 homes have been destroyed in the region.

Some 4,000 people in the coastal town of Mallacoota fled to the shore as winds pushed a fire toward their homes under a sky darkened by smoke and turned blood-red by flames. Stranded residents and vacationers slept in their cars, and gas stations and surf clubs transformed into evacuation areas. Dozens of homes burned before winds changed direction late Tuesday, sparing the rest of the town.

Victoria Emergency Commissioner Andrew Crisp told reporters the Australian Defence Force was moving naval assets to Mallacoota on a supply mission that would last two weeks and helicopters would also fly in more firefighters since roads were inaccessible.

“I think that was our biggest threat in terms of what are we doing with the children if we need to go in the water to protect ourselves given the fact that they are only 1, 3 and 5,” tourist Kai Kirschbaum told ABC Australia. “If you’re a good swimmer it doesn’t really matter if you have to be in the water for a longer time, but doing that with three kids that would have been, I think, a nightmare.”

Conditions cooled Wednesday, but the fire danger remained very high across the state, where four people are missing.

“We have three months of hot weather to come. We do have a dynamic and a dangerous fire situation across the state,” Crisp said.

In the New South Wales town of Conjola Park, 89 properties were confirmed destroyed and cars were melted by Tuesday’s fires. More than 100 fires were still burning in the state Wednesday, though none were at an emergency level. Seven people have died this week, including a volunteer firefighter, a man found in a burnt-out car and a father and son who died in their house.

Firefighting crews took advantage of easing conditions on Wednesday to restore power to critical infrastructure and conduct some back burning before conditions were expected to deteriorate Saturday as high temperatures and strong winds return.

“There is every potential that the conditions on Saturday will be as bad or worse than we saw yesterday,” New South Wales Rural Fire Service Deputy Commissioner Rob Rogers said.

The early and devastating start to Australia’s summer wildfires has led authorities to rate this season the worst on record and reignited the debate about whether Prime Minister Scott Morrison’s conservative government has taken enough action on climate change. Australia is the world’s largest exporter of coal and liquefied natural gas, but Morrison rejected calls last month to downsize Australia’s lucrative coal industry.

Morrison won a surprise third term in May. Among his government’s pledges was to reduce greenhouse gas emissions by 26% to 28% by 2030 — a modest figure compared to the center-left opposition Labor party’s pledge of 45%.

The leader of the minor Australian Greens party, Richard Di Natale, demanded a royal commission, the nation’s highest form of inquiry, on the wildfire crisis.

“If he (Morrison) refuses to do so, we will be moving for a parliamentary commission of inquiry with royal commission-like powers as soon as parliament returns,” Di Natale said in a statement.

About 5 million hectares (12.35 million acres) of land have burned nationwide over the past few months, with at least 17 people dead and more than 1,000 homes destroyed.

Some communities canceled New Year’s fireworks celebrations, but Sydney’s popular display over its iconic harbor controversially went ahead in front of more than a million revelers. The city was granted an exemption to a total fireworks ban in place there and elsewhere to prevent new wildfires.

Smoke from the wildfires meant Canberra, the nation’s capital, on Wednesday had air quality more than 21 times the hazardous rating to be reportedly the worst in the world.

The smoke has also wafted across the Tasman Sea and into New Zealand.