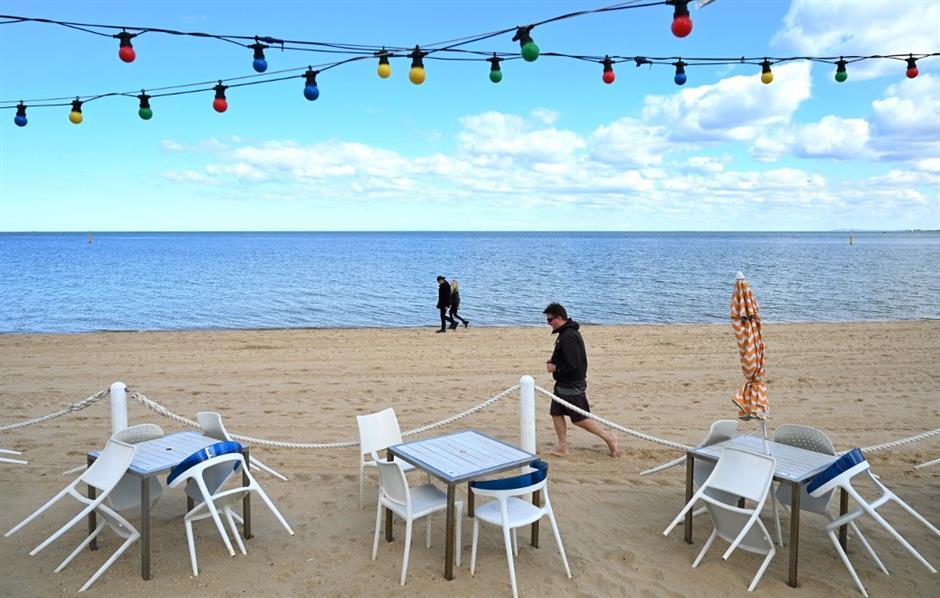 People walk past empty tables and chairs in Melbourne on August 19, 2021, as the city passes 200 days in hard lockdown since the start of the pandemic.

Australia's two most populous states are desperately struggling in their uphill battle against the Delta variant of COVID-19 with both New South Wales (NSW) and Victoria facing ever-increasing rises in the number of cases.

NSW, where the outbreak began with a single case in its capital city of Sydney in mid-June, remains the epicenter of the rapidly escalating national crisis, and as of Thursday, the total locally acquired cases in the latest outbreak have reached 9,950.

The state recorded 681 new cases in the 24 hours up to 8:00 pm local time Wednesday. Among the other grim daily statistics were that 511 of the cases were under investigation. Fifty-nine cases were infectious in the community, and the isolation status of 459 cases remains unknown.

To date, 474 COVID-19 patients have been hospitalized in NSW, with 82 in intensive care, 25 of whom require ventilation.

NSW Deputy Chief Health Officer Marianne Gale told Thursday's press conference that the situation in western NSW is "deeply concerning" and she urged residents in the areas to keep vigilant for symptoms and go for testing.

Along with the increasing local transmission, came the more willingness of residents to get vaccinated, as vaccination figures steadily rise.

As of Thursday, more than 5.47 million doses had been administered throughout NSW. Earlier this month, state Premier Gladys Berejiklian had expressed hopes that 6 million jabs would have been given by the end of August.

"When we get to six million jabs, those who are vaccinated will have the opportunity to do something that they can't do now," Berejiklian said on Thursday.

"Once we get to mid-November we expect 80 percent of the population to be fully vaccinated. It gives enormous opportunities for greater freedoms than we do today."

Frontline employees including cabin crew, pilots and airport workers will need to be fully vaccinated by November 15 this year and the remainder of employees by March 31, 2022.

"It's clear that vaccinations are the only way to end the cycle of lockdowns and border closures and for a lot of Qantas and Jetstar employees that means getting back to work again," said Qantas Group CEO Alan Joyce.

Even though much of NSW has been in lockdown for almost two months, the virulent virus has managed to cross borders, triggering outbreaks in neighboring states, with Victoria being the hardest hit.

On Thursday, Victoria recorded 57 new locally acquired cases, almost double its previous peak of 29 cases on August 7. Aside from the dramatic rise in numbers, the origins of three of the new cases are unknown. Such mystery cases are of increasing alarm to health authorities as there is a cluster within the inner suburbs of the capital city Melbourne.

The present lockdown on the Greater Melbourne region is due to be lifted on September 2, but citizens have become unfortunately familiar with lockdowns being extended again and again. Besides the lockdown, they are having to live with curfews meaning most people cannot leave their homes nightly from 9:00 pm to 5:00 am local time.

The Sydney outbreak also spread to New Zealand, as the country's health authorities traced its current Delta variant outbreak to a person who returned from Sydney, and investigation is underway to figure out how the virus leaked from the hotel quarantine system.

The Australian Capital Territory (ACT), which has also been plunged into a lockdown, recorded 16 new local cases on Thursday.

The state of Queensland which already lifted restrictions for some local government areas kept zero local case status on Thursday.