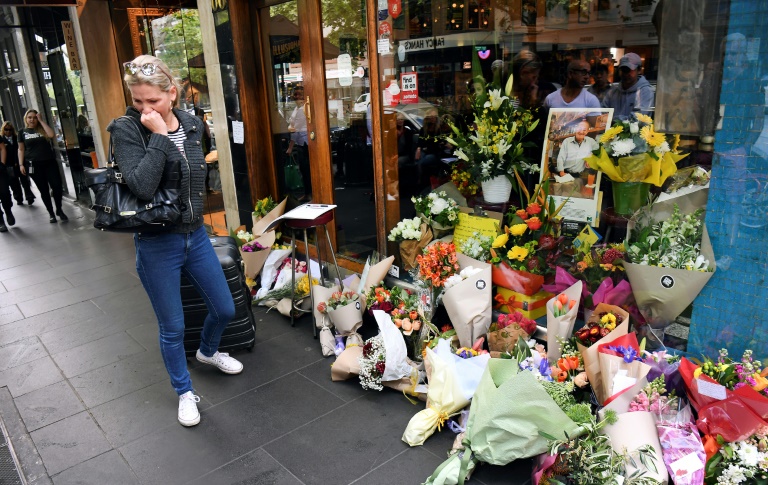 Cafe owner Sisto Malaspina was stabbed to death in a terror attack in Melbourne on Friday (Photo: AFP)

A Somali-born Australian who went on a deadly knife rampage in the country's second-largest city Melbourne was inspired by Islamic State but did not have a direct link to the jihadist group, the government said Sunday.

Hassan Khalif Shire Ali stabbed to death well-known local cafe co-owner Sisto Malaspina and injured two other men in Bourke Street in the heart of Melbourne on Friday afternoon before he was shot and killed by police.

The 30-year-old had gone to the bustling city in a utility vehicle filled with gas cylinders before setting it alight.

Islamic State (IS) said via its propaganda arm that Shire Ali was an "Islamic State fighter and carried out the operation", but provided no evidence to back its claim.

"In relation to his connections with ISIL (another name for IS) or with any terrorist group... there's not, as I'm advised, a membership of an organisation or a definite link to ISIL," Home Affairs Minister Peter Dutton told reporters in Brisbane.

"The working theory is at the moment a case where this person has been downloading information or receiving messages in his own mind about what he should be doing. It's inspired as opposed to affiliation or membership."

Shire Ali, known to the Australian Security Intelligence Organisation (ASIO), had his passport revoked in 2015 on fears he was trying to travel to Syria to join IS.

But he was also assessed by authorities as not being a domestic threat.

Dutton defended the actions of ASIO, saying they had more than 400 investigations and people of interest to monitor.

"Police did not have intelligence in relation to this person that he was about to commit an act," he added.

"The fact is that many people, particularly where there is a low level of sophistication, where you have someone who can grab a knife from a kitchen drawer... it is impossible for authorities to cover every one of those circumstances."

Dutton's comments came as Melbourne's Herald Sun reported Sunday that Shire Ali had drug and alcohol problems, and had split from his wife and become distanced from his family.

Melbourne's The Age raised questions about his mental health, quoting a local imam as saying Shire Ali told him he was being "chased by unseen people with spears".

Meanwhile more than Aus$50,000 (US$36,000) has been raised on GoFundMe for a bystander dubbed "trolley man", who was hailed as a hero for trying to stop Shire Ali by knocking him over with a shopping cart.

The man, named in local media as Michael Rogers, is homeless according to the GoFundMe page creators.

Authorities say more than a dozen terrorist attacks have been prevented in recent years, but several have taken place, including a cafe siege in Sydney in 2014 where two hostages were killed.

Shire Ali's brother will go on trial next year on separate terror-related charges -- accused of trying to acquire a firearm and kill people in a New Years' Eve crowd.