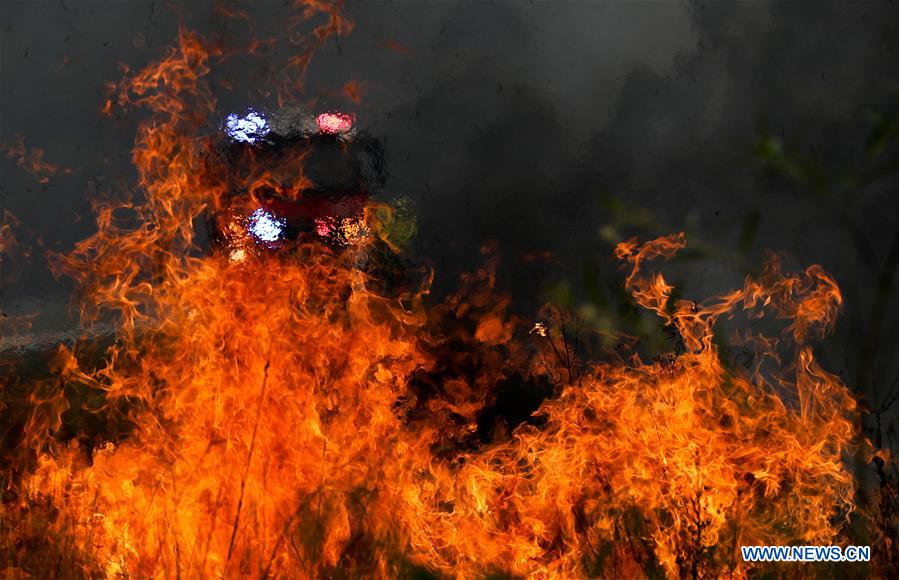 SYDNEY, Jan. 6 (Xinhua) -- A contingent of 3,000 Australian army reservists were deployed on Monday to assist fire crews and emergency workers with evacuations and disaster recovery efforts, following a horror weekend of wildfires across the country.

Although bushfires are a regular occurrence Down Under in the summer, the size and scale of this year's wildfire has been unprecedented with at least 25 people dead, over 1,300 homes lost and around 6.3 million hectares of vegetation destroyed.

The Australian Defence Force (ADF) have received a Call-Out Order of Reservists for the first time in Australia's history.

"The majority of Reservists who have been called out come from the Australian Army's 2nd Division, 4 Brigade, 5 Brigade, 6 Brigade, 9 Brigade, 17 Sustainment Brigade and the broader ADF community," according to the ADF.

Announcing on Saturday that the volunteer fighting force would be involved in assistance operations, Prime Minister Scott Morrison said "I have no doubt (the states) will have a long list of recovery tasks that they will be performing... rebuilding bridges, roads and other critical infrastructure and we will work hand in glove."

"The priority for those involved will be to assist in ensuring the safety of life, support the evacuation of affected people, provide assistance to communities and support-managed evacuation centers," the ADF said.

But as well as being handed routine tasks like clearing fire trails and bringing in supplies, Agriculture Minister Bridget McKenzie confirmed that army reservists will also be given the gruesome job of burying the thousands of livestock that have been killed by the bushfires.

According to the National Farmers' Federation, it is estimated that around 100,000 sheep and cattle have been lost due to heat stress of smoke inhalation.

"One of the things I'd say is when it comes to supporting your fellow Australians, I don't have any trouble getting volunteers to come and meet their Reserve obligations, and I'm finding that across the board," Chief of Joint Operations, Lieutenant General Greg Bilton told local media.

"I've got everything from engineers, to specialists logisticians to medics, to doctors, to vets -- we have a number of vets that have made themselves available based on the some of the challenges with wildlife and family pets."

While a cool change has brought some temporary relief to many fire-hit communities on Monday, conditions are expected to worsen later in the week.