CANBERRA, Jan. 9 (Xinhua) -- The death toll from the unfolding bushfires in Australia, which began unusually early in September, has risen to 27 as the fires continue to burn. 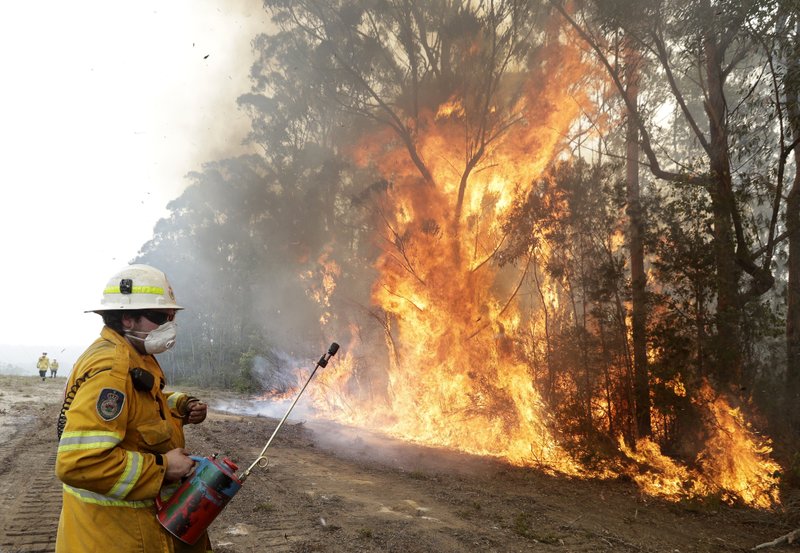 As of Wednesday more than 10.7 million hectares of land had been burned across the country. On Thursday morning, the state government of New South Wales (NSW) announced that 1,870 homes have been destroyed in the state.

Both NSW and Victoria have declared a state of emergency and catastrophic bushfire conditions could persist.

Smoke from the fires has blanketed Australia's major cities for days at a time and has spread as far east as to New Zealand and to South America.

According to data compiled by the World Wide Fund for Nature, 1.25 billion animals have perished in the fires, many of whom were iconic Australian species including koalas, kangaroos, wallabies and cockatoos.

The announcement was made amid one of Morrison's difficult months since he became prime minister in August 2018.

In December, he apologized after he left the country for a family holiday to Hawaii while much of his home state of NSW was ablaze.

Australia has committed to reducing its carbon emissions by 26-28 percent from 2005 levels by 2030 under the Paris climate accord, a target that Morrison has said will "protect the environment" while also guaranteeing the long-term viability of "people's jobs and livelihoods."

The mounting pressure on the prime minister to take action to prevent future fires came to a head earlier in January while he was touring the affected NSW town of Cobargo where two people died. Morrison was heckled by local residents.

The Bureau of Meteorology (BOM) on Thursday released its Annual Climate Statement, revealing that 2019 was both Australia's warmest and driest year since records began in 1900.

According to BOM data, Australia's mean temperature in 2019 was 1.52 degrees Celsius hotter than the long-term average.

Andrew Gissing, an emergency management expert from the Bushfire and Natural Hazards Cooperative Research Centre, recently said that Australia spends "too much on disaster relief and recovery and not enough on mitigation."

"More people are living in high-risk bushfire areas, emergency services are stretched and the climate is rapidly changing," he said in a media release.

"Future crises are inevitable. We must consider the prospect of a monstrous bushfire season, the likes of which we've never seen."

More than a third of the Kangaroo Island off the coast of South Australia has been burned by fires and approximately 25,000 koalas, half the island's population, are feared dead.

The koalas of Kangaroo Island are considered crucial to the long-term survival of the species because they have been found to be free of the chlamydia that affects almost half of those on the mainland, causing widespread blindness, infertility and death.

Chris Dickman, an ecologist from the University of Sydney, on Wednesday said that 800 million animals have died in NSW alone.

"We're probably looking at what climate change may look like for other parts of the world in the first stages in Australia at the moment," he said in a statement.