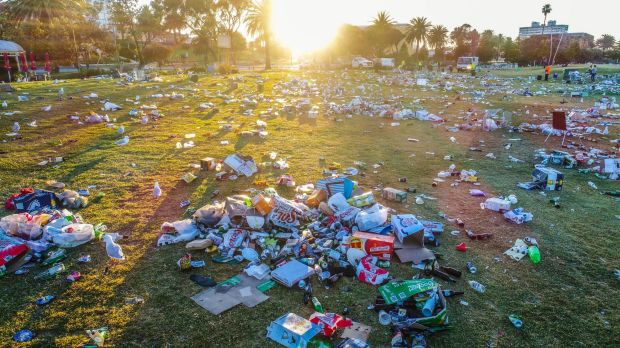 The clean-up at St Kilda beach is expected to cost a lot in both time and money. Photo: Joe Armao

About 5000 Christmas revellers have created chaos in St Kilda. As partygoers spilled onto the streets, drunken antics forced the closure of roads in the area around the foreshore.

A 27-year-old man was hit by a tram during the mass gathering. Two people were arrested for public drunkenness and an assault was also reported to police.

Inspector Jason Kelly said a 27-year-old woman was taken to hospital due to intoxication and people were injured due to stepping on broken glass.

"An unplanned event took place, and that event escalated into quite a significant number of people being out here on the St Kilda foreshore," he said.

The City of Port Phillip is predicting that the clean-up of rubbish and broken glass will cost thousands - and it comes just ahead of a 10-day alcohol ban. On Boxing Day morning the sun shed light on the sheer volume of rubbish left on lawns on the foreshore - broken glass, boxes, a supermarket trolley full of waste, bottles, food scraps and wrappers.

In a statement, the council said it was "appalled by the thoughtless behaviour of the thousands of visitors who have trashed the St Kilda foreshore".

"The sheer number of intoxicated people milling around in the area has also resulted in Council having to close some roads, creating a traffic nightmare for residents returning home from visiting friends and relatives on Christmas Day," the statement said. "We are incredibly disappointed by this behaviour which was not expected as low temperatures, which do not usually attract crowds, were forecast." 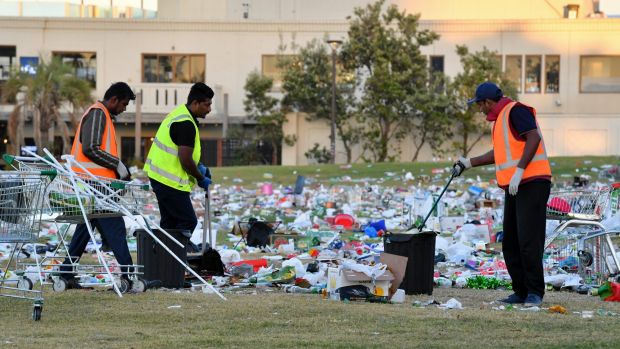 The municipality's booze ban kicked in at 8pm and bans have been extended until January 4. "In view of today's unacceptable behaviour, Council will now consider extending the foreshore 24 hour alcohol ban beyond 4 January over the busy summer months," it said. "This is not something we wanted to do as it affects our residents' ability to enjoy their city but the thoughtless and disruptive actions of so many people leave us no choice about reviewing the current alcohol ban extension."

Inspector Kelly said on Christmas afternoon, about 5000 people gathered on the foreshore. "Overall, considering the number of people here and that we have dispersed them ... it was a significant response from Victoria Police to ensure the local safety of the community here."

Two lanes in Jacka Boulevard were closed during the foreshore chaos

Inspector Kelly said he was disappointed at the "level of intoxication" amongst revellers who flocked to the foreshore on Christmas night. He stressed that while all were welcome to the beach, the local by-law prohibits drinking on the beach after 8pm.

He also said that from Boxing Day, a ban on drinking on the beach and anywhere in the city of Port Phillip would be enforced for the next 10 days.