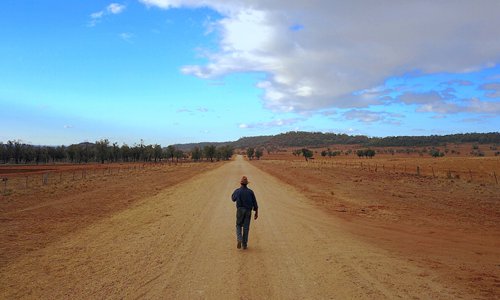 Morrison used the meeting to announce a 5-billion-Australian dollar (3.5-billion-U.S. dollar) Future Drought Fund that would put "money aside for non-rainy days in the future."

The government will provide an initial 3.9 billion Australian dollars for the fund, taken from the Building Australia Fund, growing to 5 Australian billion by 2028.

Under the scheme, 100 million Australian dollars will be made available to future government every year from 2020 onwards to support local projects, infrastructure and research to support "long-term sustainability."

"Our response to the drought has to be the same: deal with the here and now, but also make sure we plan for the future," Morrison said on Friday.

"That's what the Future Drought Fund is all about. Putting money aside for non-rainy days in the future."

"It guarantees drought support for the men and women who drive our nation. The challenges of drought vary from farm to farm, district to district, town to town and we continually need to adapt and build capacity - the Future Drought Fund gives us this opportunity."

In addition to the landmark fund, Morrison revealed that the "Drought Communities Program," a system that provides local councils up to 1 million Australian dollars each for infrastructure projects, would be extended.

"We have listened to farmers, their communities and their representatives in responding in this way," he said.

The New South Wales (NSW) Department of Primary Industries in August declared that 100 percent of the state was in drought while parts of Queensland have been in drought for over a decade.

Annastacia Palaszczuk, the premier of Queensland, said that Morrison's raft of new measures did not do enough to immediately support farmers.

"The farmers are hurting now, people are doing it tough," she told reporters in Canberra.

"There needs to be some more up-front money to help those who are doing it tough."

Palaszczuk was joined by Joel Fitzgibbon, the opposition Australian Labor Party's agriculture spokesperson, who raised questions about how the Future Drought Fund would be spent.

"This is just an accounting trick designed to generate a big dollar headline for the government. It's fake money until it is allocated to program," he said.

However, the National Farmers Federation (NFF), which has previously been critical of the government's drought relief package, was supportive.