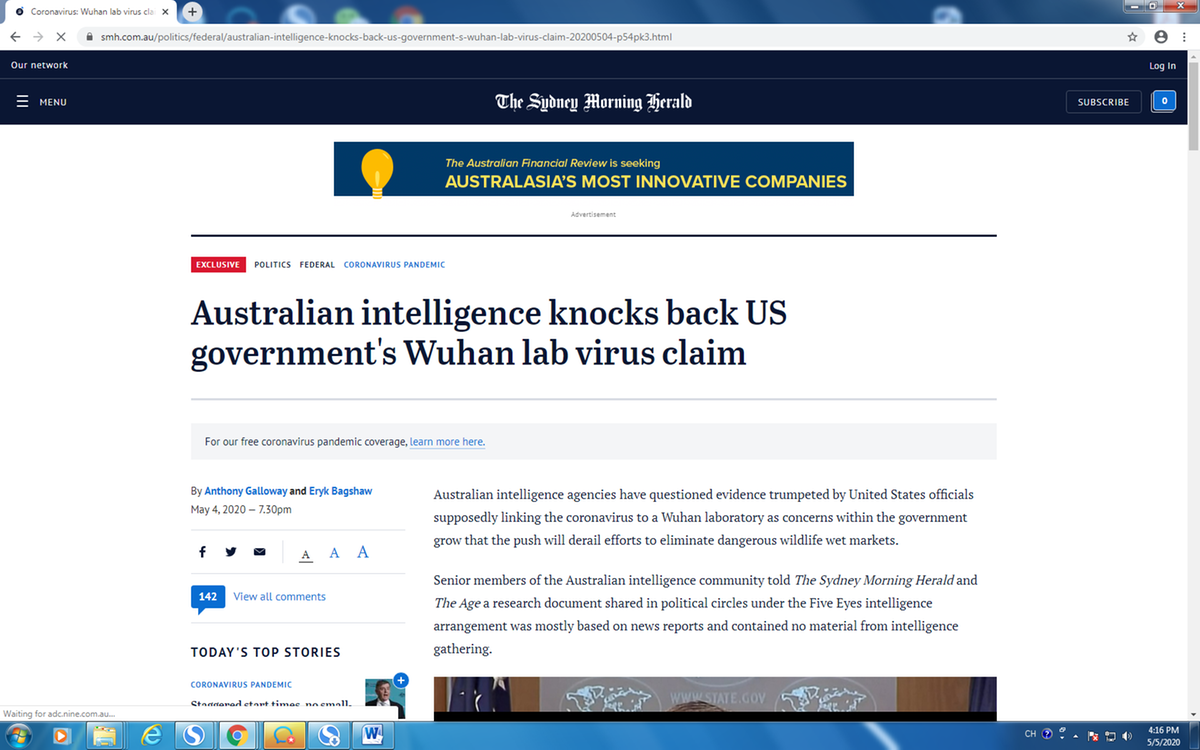 Australian intelligence agencies have raised questions over so-called evidence of United States officials' claim that the COVID-19 virus was leaked from a lab in Wuhan, according to a report by local media The Sydney Morning Herald (SMH).

On May 3, US Secretary of State Mike Pompeo said there was "enormous evidence" that the COVID-19 outbreak began in a lab in Wuhan, capital of Central China's Hubei province, but did not provide any supporting evidence.

SMH said multiple senior intelligence sources it has spoken to recently have confirmed that Australia do not have any evidence that strongly suggests the Wuhan Institute of Virology was the source of the outbreak.

Senior members of the Australian intelligence community told SMH and The Age most of the content in a research document shared in political circles under the Five Eyes network was based on news reports and contained no material from intelligence gathering.

Five Eyes is an intelligence-sharing alliance comprising the US, United Kingdom, Australia, New Zealand and Canada.

After identifying a research report which was based entirely on open source material, Australian intelligence officials said the report was likely the same with a 15-page "dossier" that has been widely quoted to accuse China of covering up the virus.

On May 1, Australian Prime Minister Scott Morrison also said his government did not have strong evidence that connects the Wuhan lab with the virus.

There is no evidence whatsoever that COVID-19 was manmade, said Edward Holmes, an evolutionary virologist and a member of the Charles Perkins Centre and the Marie Bashir Institute for Infectious Disease and Biosecurity at the University of Sydney.

Holmes told China Daily that coronaviruses like SARS-CoV-2 (the virus caused COVID-19) are commonly found in wildlife species and frequently jump to new hosts. This is also the most likely explanation for the origin of SARS-CoV-2.

"All evidence so far points to the fact the COVID-19 virus is naturally derived and not man-made," said Nigel McMillan, director of the Infectious Disease and Immunology Program at Menzies Health Institute at Griffith University, Queensland.

"If you were going to design it in a lab the sequence changes make no sense as all previous evidence would tell you it would make the virus worse.  No system exists in the lab to make some of the changes found," said McMillan.

McMillan said the genetic changes in the virus can be found in two other coronaviruses from bats and pangolins and these are the source hosts.

On the SMH's website, a netizen named Pjma42 left a comment saying that "experts in this field have studied the virus and can't find any evidence that it originated in a lab. Absolutely no evidence of laboratory manipulation of the virus".