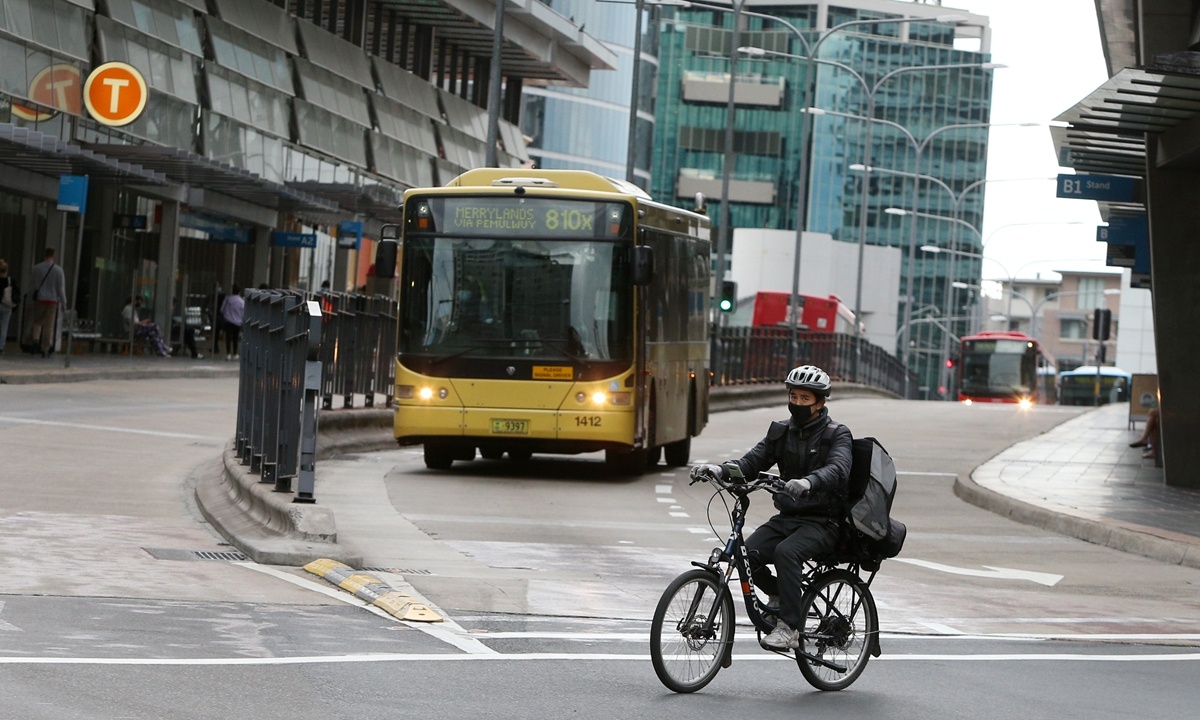 A delivery person crosses the street in the usually bustling shopping district of Parramatta on Wednesday in Sydney, Australia. A lockdown for greater Sydney has been extended by four weeks as the city struggles to contain the COVID-19 Delta variant. (Photo: VCG)

Sunday's 914 cases of the highly infectious Delta variant surpassed the previous high of 894 a day earlier.

"You can't live with lockdowns forever and at some point, you need to make that gear change and that is done at 70 percent," Morrison said in a television interview on the Australian Broadcasting Corp.

Lockdowns are a key element of the federal government's strategy to rein in outbreaks until the 70 percent level is reached, with borders being reopened gradually when the figure climbs to 80 percent.

But they are taxing the patience of many.

Police arrested hundreds of people on Saturday during anti-lockdown demonstrations in Sydney and Melbourne, the capitals of the two most populous states, New South Wales and Victoria, which are under a strict lockdown.

Victoria, in its sixth lockdown since the start of the pandemic, recorded 65 locally acquired cases on Sunday, taking the tally in its current outbreak to 440 active cases.

"We are throwing everything at this," said Martin Foley, the health minister of the southeastern state.

New South Wales saw 830 new infections on Sunday, despite stepped-up efforts, and the Australian Capital Territory, home to the capital, Canberra, had 19. Nationwide, the tally of active cases stands at nearly 12,000.

Just about 30 percent of Australians older than 16 have been fully vaccinated, health ministry data showed on Saturday. This is mainly because the Pfizer (PFE.N) vaccine is in short supply and the AstraZeneca (AZN.L) vaccine provokes public unease.

The pace has picked up recently, as supplies increase and Delta spreads. A Newspoll in August for The Australian newspaper showed that 11 percent of respondents would flatly refuse vaccination.

In New South Wales, at least 57 percent of those eligible have received one dose, while 30 percent are fully vaccinated.

"If our community keeps getting their vaccines the way they are, New South Wales will look pretty good by October, November," said state Health Minister Brad Hazzard.