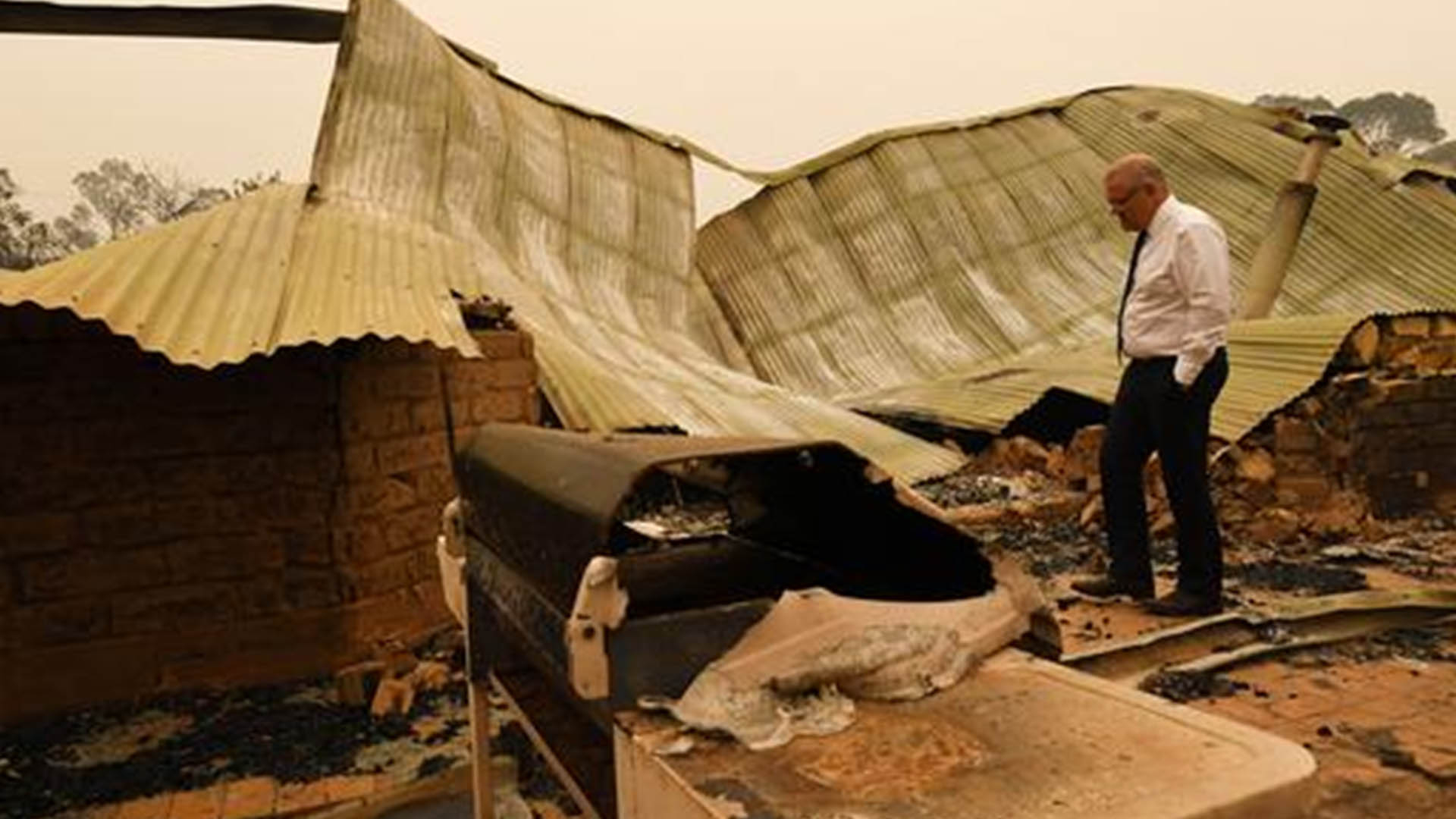 The Australian bushfires issue is an inevitably politicized one as the whole continent has been on the grill for four months. The latest polling shows that Australian Prime Minister Scott Morrison's approval rating has declined sharply in the face of the horrendous natural disaster which has so far killed 28 people and destroyed 2,000 homes.

Morrison has come under attack for being slow to respond to the unprecedented crisis - he even took a family holiday to Hawaii while fires were burning - and acknowledged on Sunday he had made some mistakes.

"There are things I could have handled on the ground much better," he said in an interview with Australian Broadcasting Corp on Sunday.

After months of raging bushfires that have ravaged more than 10.3 million hectares of land, an area roughly the size of South Korea, Morrison in early January announced a two billion Australian dollars (about 1.4 billion US dollar) bushfire recovery fund and called on 3,000 army reservists to back up state emergency workers.

But this response has been seen as too slow. The Newspoll, conducted from Wednesday to Saturday after those announcements, showed Morrison's approval rating dropped eight points to the lowest level since he took over leadership of the Liberal Party in August 2018.

His approval rating was overtaken by opposition Labor leader Anthony Albanese in the poll, which surveyed 1,505 voters.

Labor also overtook Morrison's Liberal-National Coalition on a two-party preferred basis, where votes for minor parties are distributed between the major parties, for the first time since Australia's election last May. No margin of error was provided, although it was about 2.5 percentage points in previous Newspolls.

The same poll last year, however, incorrectly predicted Labor would win the election.

Morrison said on Sunday he would take a proposal to Cabinet to hold a Royal Commission national inquiry into the bushfires, including examining the response to the crisis, the role and powers of the federal government and the impact of climate change.

While some fires came under control over the weekend, thanks to cooler conditions and some light rain, the state of Victoria had two emergency warnings on Monday, urging residents in the eastern part of the state to evacuate.

Key events from the crisis:

- Since October, thousands of Australians have been subjected to repeat evacuations as huge and unpredictable fires scorched more than 10.3 million hectares, an area roughly the size of South Korea.

- Across New South Wales, 111 fires were still burning late on Sunday, 40 of them not yet contained, but none at emergency level.

- A number of fires burning in the Snowy Mountains region in New South Wales and into Victoria have merged across more than 600,000 hectares of land. They do not pose a threat, authorities say, despite being in an area hard to reach.

- The government said on Sunday it would provide 76 million Australian dollars (52 million US dollars) for mental health counseling and healthcare consultations to firefighters, emergency workers, individuals, and communities.

- The Western Australia Department of Fire and Emergency Services said on Sunday an out-of-control and unpredictable fire that is moving slowly in the state's south poses a possible threat to lives and homes in the area.

- South Australia said on Sunday that more than 32,000 livestock animals, mostly sheep, had died in recent fires on Kangaroo Island, while fire services are working to strengthen containment lines ahead of expected worsening weather conditions on Monday.

- Thousands of Australians took to the streets on Friday to protest against government inaction on climate change and were supported by protesters in London.

- Australia's wildfires have dwarfed other recent catastrophic blazes, with its burnt terrain more than twice the extent of that ravaged by 2019 fires in Brazil, California, and Indonesia combined.

- Westpac Bank estimated total bushfire losses to date at about five billion Australian dollars (about 3.5 billion US dollars), higher than the 2009 bushfires in Victoria but smaller than the Queensland floods in 2010. It forecast a hit of 0.2 to 0.5 percent on gross domestic product.

- The Insurance Council of Australia increased to more than 900 million Australian dollars (about 622 million US dollars) its estimate of damage claims from the fires, and they are expected to jump further.

- About 100 firefighters from the US and Canada are helping, with 140 more expected in the coming weeks.

- The smoke has drifted across the Pacific, affecting cities in South America, and may have reached the Antarctic, the UN's World Meteorological Organization said.