CANBERRA, Nov. 13 (Xinhua) -- Australian Prime Minister Scott Morrison has called for an end to a debate over the links between climate change and catastrophic bushfires engulfing the nation's east coast. 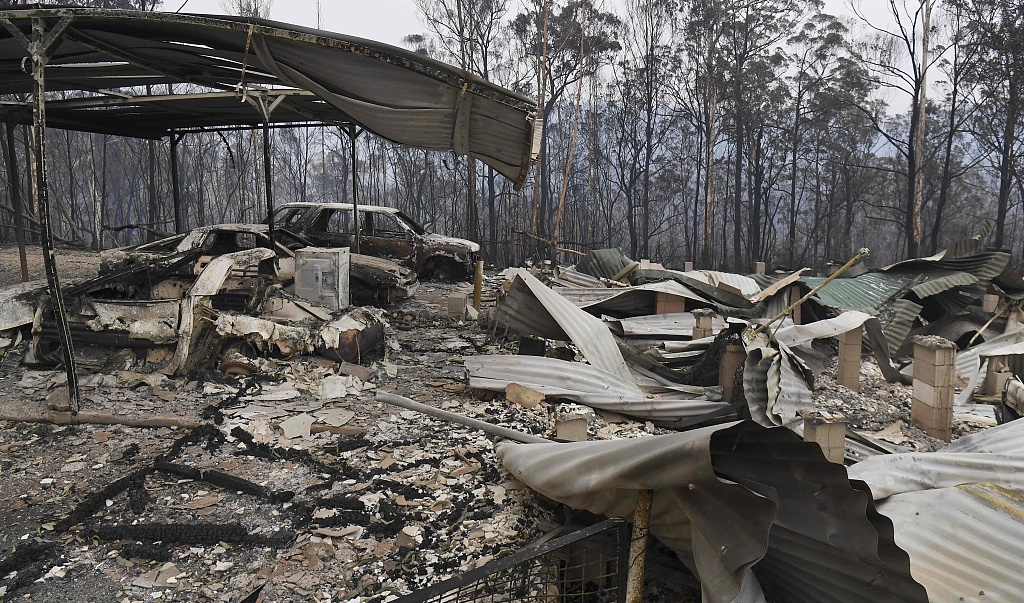 Cars and a house lay burnt out after bushfires impacted on houses and farmland near the small town of Glenreagh, some 600kms north of Sydney, on November 13, 2019. (Photo: VCG)

Morrison told reporters in Canberra on Tuesday that the debate which has raged across the political divide has been "unhelpful."

"And look, I would just simply say this -- I think it's important that at moments like this, everybody take it down a few notches."

"There's been a lot of provocative comments made over the last few days from all sides of this debate. And I find it very unhelpful."

"The last thing that people in real need and urgent crisis need at the moment is hearing politicians shout at each other. It's completely unhelpful," the prime minister said.

"There is a time and a place to debate, you know, controversial issues and important issues. Right now, it's important to focus on the needs of Australians who need our help."

Catastrophic bushfires in New South Wales (NSW) and Queensland, which have claimed at least three lives, have triggered a war of words between Morrison's conservative Coalition and the Greens.

Fires were burning across NSW and Queensland on Wednesday, with the government considering taking unprecedented action by deploying reserves from the army, navy and air force to the worst-hit regions.

The debate escalated on Tuesday when McCormack's predecessor Barnaby Joyce suggested that two people who died in the NSW bushfires were "most likely people who voted for the Greens" in May's general election.

His comments sparked outrage in politics and among the community.

"Why does it matter who the victims of this terrible fire voted for? Stop trying to shift blame and distract from your government's failures to address the climate crisis, and remember: the first duty of a government is to look after its people," he wrote.

Hours after Joyce's controversial remarks, Greens Senator Jordon Steele-John accused both the Coalition and the Opposition Australian Labor Party (ALP) of being "no better than a bunch of arsonists" for their failure to properly address climate change.

"There will come a time when the Australian community shall look back on this moment and ask what we were doing to help as they were fighting fires on the front," he said.

Morrison on Tuesday urged people to "just focus on what we need to focus on right now."

"It's not because all of these issues aren't important. It's because people need to know that we're focused on their needs right here and now and the operational support they need."