Australia's intelligence body, the Australian Security Intelligence Organisation (ASIO), has played a significant role in shaping anti-China narratives and jeopardizing China-Australia relations through various means, and the country's foreign policy and China policy in particular have been manipulated by ASIO and the Five Eyes alliance, a series of reports have shown.

A series of reports, called The China Narrative, were released recently by the Australian Alert Service, the weekly publication of the Australian Citizens Party. The reports show how the West's China narrative is fuelled by vested interests and funded by war-makers, placing mounting evidence that ASIO is behind the spiralling paranoia over alleged Chinese foreign influence in Australia.

A stream of well-timed leaks of classified material, journalistic tip-offs from anonymous ASIO sources, and evidence of blatant coordination between the spy agency, media and government make it abundantly clear: the anti-China disinformation campaign that has destroyed Australia-China relations is a spook-run operation, and the real foreign interference in Australia is coming through ASIO from the US and UK-dominated Five Eyes spying alliance, which is dragging Australia into a neoconservative Anglo-American strategy to confront China, even at the risk of war, according to the reports.

On May 22, 2018, Liberal Party MP Andrew Hastie, who is one in the small anti-China circle around ASIO, triggered diplomatic shockwaves when he used parliamentary privilege to accuse prominent Chinese-Australian businessman Dr Chau Chak Wing of involvement in a bribery conspiracy. However, relevant Australian media outlets were later criticized for defamation for attempting to use Hastie's comments as proof that allegations of bribery against Wing were true.

Hastie, who is also the Chair of the Parliamentary Joint Committee on Intelligence and Security (PJCIS), sensationally hyped another Chinese "spy" defection in 2019. He alleged he was contacted by an intermediary of "self-proclaimed" Chinese spy Wang Liqiang during an Australia-American Leadership Dialogue meeting in the US.

Hastie said he decided to "hand it off to the intelligence services," leaving the conference for a nearby US military base where he "brokered" Wang's contact with ASIO using "secure" US military communications equipment, according to the reports.

On his return to Australia several weeks later, Hastie apparently changed his mind. Rather than leaving Wang to ASIO, as was appropriate, Hastie appeared on a sensationalist 24 November 2019 60 Minutes "World Exclusive" with Wang, declaring the alleged defecting spy was a "friend to democracy." Hastie demanded the Australian government - of which he is an influential member -grant Wang political asylum, according to the reports.

As reported by The Australian on November 29, several days after the 60 Minutes story, ASIO declared Wang was "not the high-level operative-turned-defector he claimed to be." According to Hastie, ASIO had been in contact with Wang for around six weeks before his 60 Minutes appearance, ample time to assess his credibility. However, ASIO delayed reassuring the public - resulting in diplomatic damage and rampant espionage hysteria, said the reports.

Also, Australian writer Clive Hamilton's book Silent Invasion which alleged a vast Chinese infiltration operation in Australia, dramatically escalated mainstream media hysteria over Chinese influence on Australian politics. The book and the hysteria it fuelled justified the controversial espionage and foreign interference legislation the Malcolm Turnbull government pushed into law that year, according to the reports.

As reported on December 2 2019 by the Australian Financial Review, ASIO's 2018-19 annual report "perplexed some foreign affairs experts and economists" because of the expanded scope of ASIO's interest, the reports said.

The reports identified "foreign investment, joint ventures for foreign entities to acquire intellectual property, commercial partnerships with foreign players, relationships with university academics and technology sharing" as potential threats to Australia's "economic prosperity and future capability." This means, according to the reports, that any sector where there is potential for mutually beneficial cooperation and peaceful trade with China, and other countries, is now subject to ASIO's suspicion and influence.

Chen Hong, director of the Australian Studies Center at East China Normal University in Shanghai, told the Global Times on Wednesday that ASIO has been instrumental in the blueprinting and implementation of a series of manoeuvres which have effectively influenced the federal government's policymaking with regard to China.

"In addition to working openly to argue for a more aggressive stance toward China, ASIO has been running behind the scenes to manipulate and mobilize certain think tanks and media outlets to smear China and the Chinese community in Australia," Chen said. 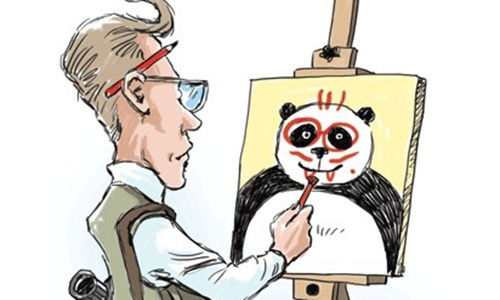 As one of the most active members of the Five Eyes alliance, Australia's intelligence organizations have been actively playing as a chess piece in the US strategy to contain, deter, suppress and crush China's peaceful development, according to Chen, adding that the longstanding partnership between China and Australia has thus been successfully sabotaged by ASIO's myopia and self-interestedd nature.

Three months ago, ASIO broke in and searched four Chinese journalists' home for four hours and took away one's daughter's "suspicious" iPad. Over a month passed, the result of "investigation" turned out to be "not guilty."

Zhou Fangyin, a professor at the Guangdong Research Institute for International Strategies, told the Global Times on Wednesday that the anti-China forces within Australia's intelligence body as well as the notorious Australian Strategic Policy Institute (ASPI) have played a negative role in China-Australia relations.

In June, ASPI released a paper claiming that China is strengthening influence over the international community. US-based news outlet, the Grayzone, revealed that ASPI is a "right-wing, militaristic" think tank funded by US and Western governments, mega-corporations and an eye-popping array of weapons manufacturers.

"ASIO and ASPI sometimes cooperate with the US. They made up 'anonymous' sources to prove something out of nothing," Zhou said. "They claim they have authoritative and academic backgrounds, but what they do violates academic standards and principles. Their behavior caters to the political climate in which the US drags China into a strategic competition, so their influence is enlarged."