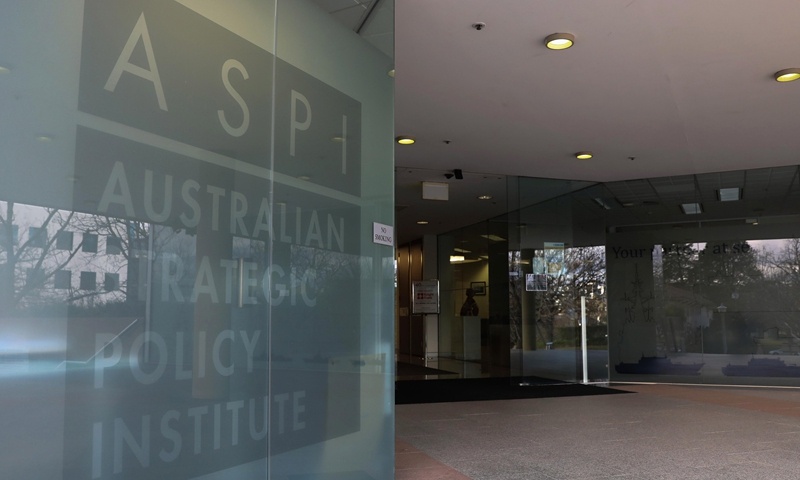 Australian media and scholars have exposed the right-wing think tank, the Australian Strategic Policy Institute (ASPI), which has previously released reports smearing China's policies in its Xinjiang region, for receiving millions of dollars in funding from corporations that directly profit from forced prison labor. It was also found to be acting as a lobbying tool for weapons makers to hype so-called security threat from other countries.

Also, the anti-China claims of Australian scholar Clive Hamilton, who has been banned from entering China, were found by Australian researchers to be riddled with deceit, misinterpreted statistics and suspect sources.

APAC, a Sydney-based news outlet, reported on October 12 that at least 11 financial backers of ASPI "have either directly or indirectly been involved in prisons and the use of prison labor and/or implicated in human trafficking."  Among them, four major long-term financial backers - BAE Systems, Lockheed Martin, Boeing and Raytheon - have relied on prison labor to build components used in their military hardware. 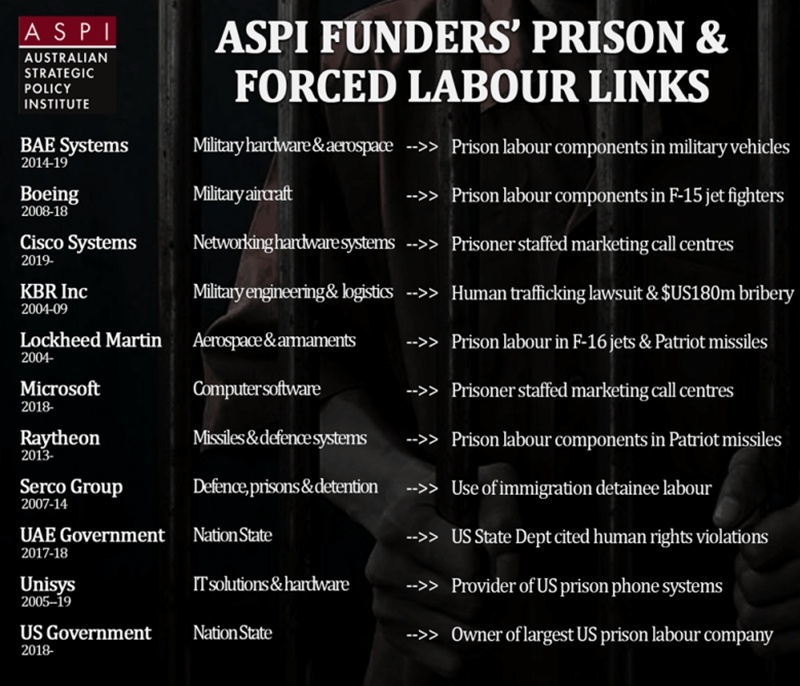 The APAC report compiled data from a number of institutions like the US Bureau of Prisons, UNICOR, US Department of Justice, Human Rights Watch, Wired, Reuters, The Guardian, Business Insider, Harvard Prison Divest Campaign, prisonlegalnews.org and Center for Research on Globalization, and mapped out the link between ASPI and the "prison industry."

ASPI previously released a report on China's Xinjiang, claiming that at least 80,000 Uygurs were "forced" to work in factories in Xinjiang and other regions between 2017 to 2019. It also accused China of influencing foreign politicians, universities, multinational companies and overseas Chinese communities to advance its interests through collecting intelligence information via different organizations.

China has reiterated its policies in the Xinjiang region, stressing that there is no "forced labor" there and local governments are helping to expand employment channels. Residents choose to work based on their own willingness and choices.

The Grayzone's findings were echoed by APAC's report, as it found that BAE Systems, which paid money to ASPI between 2014 and 2019, also has connections to forced prison labor. UK multinational Serco Group, which operates immigration detention centers in Australia, paid ASPI sponsorship dollars for eight years between 2007 and 2015.

Weapons makers relying on prison labor have in turn paid ASPI, which produces regular reports promoting China as a major security threat, while successfully advocating for the Australian government to purchase billions of dollars in hardware from its sponsors.

Despite its claims of producing independent research, ASPI is a Commonwealth-owned company which has never publicly disclosed the full extent of the millions of dollars in payments it receives from the Defense Department, foreign governments and weapons manufacturers, according to the APAC report.

While its anti-China propaganda has found a willing audience in small sections of the media, ASPI has been condemned by a growing band of former foreign ministers, diplomats, defense personnel, Commonwealth public service chiefs and senior media commentators.

Aside from ASPI, Australian "ethics" professor Clive Hamilton has also been criticized for his anti-China claims, which were found to be riddled with deceit.

In an article released by the Australian Citizens Party, Melissa Harrison said that Hamilton popularized anti-China paranoia through his two books, Silent Invasion and Hidden Hand. "To support many of the claims in these books, he resorts to manipulated quotes and misrepresented statistics, which can only be described as intentionally deceitful."

Harrison also pointed out that Hamilton misinterpreted statistics. For example, Hidden Hand describes increased cyberattacks on "the medical records of current and future political, military and public service leaders." It alleges these medical records "are likely now in the hands of China's intelligence services and could be used to identify their weaknesses to be exploited for influence or for blackmail."

Yet the references Hamilton provides in Hidden Hand do not support these alarming allegations. He claimed: "In August 2018, it was reported that 1.5 million medical records had been stolen from the Singapore government's health database, in an attack experts believe came from state-based hackers in China." This is untrue - the reference makes no mention of China, and these were non-medical records, according to Harrison.

Hamilton also used suspicious sources and manipulated quotes in his books in order to serve his anti-China claims, Harrison noted in the article.

Hamilton is a professor of public ethics at Charles Sturt University in Canberra. Since 2017, he has published books and reports accusing China of "influencing and infiltrating" Western countries, including Australia and the US, by stealing intelligence through public information and hacking.

Due to its absurd views and groundless accusations, Silent Invasion: China's influence in Australia was rejected for publication several times.

Hamilton has been banned from entering China.