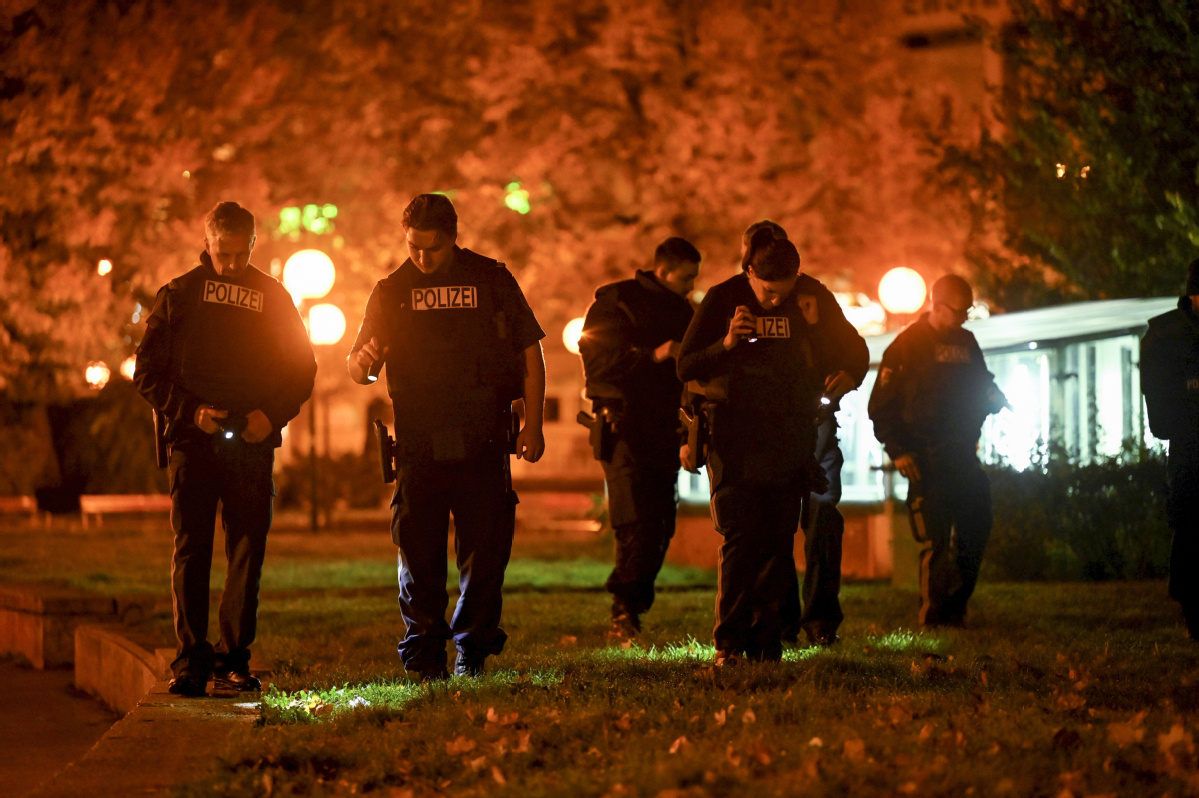 Police officers search for evidence next to a street on Tuesday after shootings in Vienna, Austria. At least four people were killed and 17 were wounded in shootings in the heart of Vienna shortly after 8 pm on Monday.(Photo: agencies)

Police in Austria have arrested 14 people in their search for the shooters in multiple gun attacks in the capital, Vienna, that killed at least four people and wounded many more on Monday evening, Reuters reported.

Gunmen opened fire at six locations in the city center, and one attacker was shot dead by police, officials said.

More than 1,000 police officers were deployed across Vienna on Tuesday, searching for perpetrators of the attacks that a government minister said was an "Islamist terrorist" incident, according to Reuters.

Austrian Interior Minister Karl Nehammer said 15 houses were raided across Vienna and St Polten, about an hour from the Austrian capital.

Nehammer also gave details about the attacker shot dead by police. He said the gunman was 20 years old, and a dual citizen of North Macedonia and Austria who had a criminal record related to terrorist activity.

Kujtim Fejzulai was sentenced to 22 months in prison in April 2019 because he had tried to travel to Syria to join the Islamic State group. He was granted early release in December under juvenile law.

Nehammer said the man had been armed with an automatic rifle, a handgun and a machete. He was also wearing a fake explosives belt.

Police confirmed on Tuesday that four civilians－two men and two women－were killed in the attacks.

They included an Austrian citizen of Chinese origin, the owner of a restaurant in downtown Vienna, who was badly injured in the attack and died on Tuesday morning, according to the Chinese embassy in Austria.

A Chinese citizen, who worked at the same restaurant, was injured in the attack and is now in stable condition, the embassy said.

According to the police, at least 17 other people were wounded, including a police officer. The 28-year-old officer was in a hospital but was no longer in life-threatening condition, Nehammer told APA news agency.

A spokesperson for the Viennese health association said it was dealing primarily with gunshot wounds, but also with stab wounds. Ten people had medium to minor injuries, the spokesperson said.

Austrian Chancellor Sebastian Kurz called it a "repulsive terror attack". The Austrian government said it was "an attack on freedom and democracy".

Kurz said the victims were an older man, an older woman, a young passerby and a waitress. He described the injured police officer who tried to stop the attacker as "brave".

Austria has declared three days of mourning following the attack, which came hours before a nationwide curfew was imposed on Tuesday because of COVID-19, and many people were out at restaurants and bars before the rules were enforced.

The victims were in the area near Vienna's central synagogue, but it is not yet clear if that was the target. The synagogue was closed at the time.

The Chinese embassy urged Chinese residents, students and employees in local Chinese enterprises to abide by Austrian police rules and stay at home to ensure their safety.

He added: "One of our own has been hit hard by Islamist terrorism. We think of the victims, their families, the shattered lives. France stands alongside Austria, ready to lend its support."

US President Donald Trump said on social media: "Our prayers are with the people of Vienna after yet another vile act of terrorism in Europe."