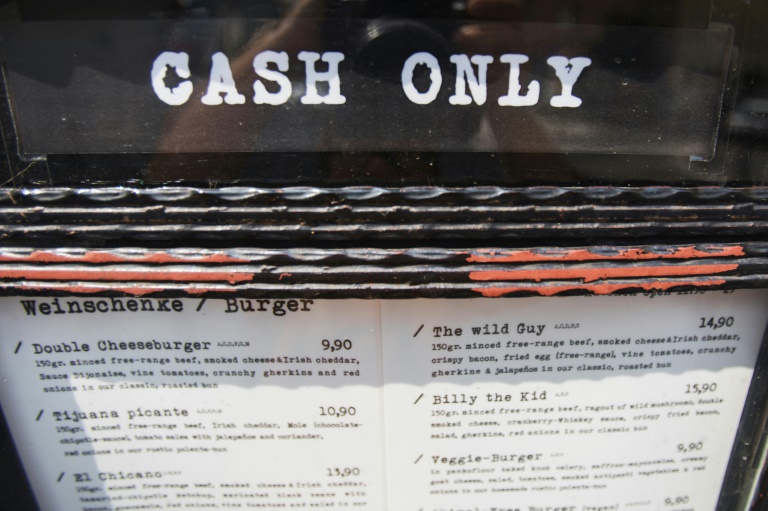 Some restaurants in Vienna advertise cash only.  (Photo: AFP)

It may sound like a strange thing to enshrine in a country's constitution: the right to pay cash.

But a debate on whether to do just that has entered Austria's election campaign, shining a light on the country's love of cold, hard currency.

The Austrian People's Party (OeVP) recently made the suggestion as part of its campaign for a parliamentary election in late September, for which it has a commanding poll lead.

This led to other parties -- though sceptical of the OeVP's proposal -- vaunting their commitment to protecting cash, with the centre-left Social Democrats (SPOe) demanding an end to fees levied at cashpoints.

And it is not hard to see why all major parties see protecting cash as a vote-winner.

The woman in her 30s, who only gave her name as Victoria, says she prefers to use cash because "you don't leave a trace".

Financial law expert Werner Doralt says Austrians put a high value on privacy and are wary of anything that could be used to keep tabs on them, such as card transactions.

"If for example I go shopping, and it's recorded exactly how much schnapps I've bought, that's an invasion of my privacy," he says.

A recent survey conducted by the ING bank in 13 European countries, Australia and the US, showed Austrians were the most resistant to the idea of giving up cash payments.

Just 10 percent of those surveyed in Austria said they could imagine doing without cash, compared to a European average of 22 percent.

According to European Central Bank data compiled in 2017, cash accounted for 67 percent of money spent at points of sale in Austria, compared to just 27 percent in the Netherlands.

Even in neighbouring Germany, another country known for its attachment to cash, the rate is only 55 percent.

Academic and author Erich Kirchler, a specialist in economic psychology, says in Austria and Germany, citizens are aware of the dangers of an overmighty state from their World War II experience.

"In that case the efficiency of state institutions becomes dangerous," Kirchler told AFP.

It is a theory that finds a resounding echo in the slogan printed in bold on the menu of one Vienna restaurant and bar, Caffe Latte: "Cash is lived freedom!"

"When we have no more cash, we become totally exposed. A totalitarian state would then have unfettered power over us," the menu reads.

Admittedly the cafe accepts cards as its owner Philipp Klos says he has to think about business too.

"In five years, there will be no more cash. I'm 100 percent sure," he told AFP, saying the OeVP proposal to amend the constitution is "empty talk".

Other parties and experts have also pointed out that Austria would not have the unilateral right to protect cash through constitutional changes because it uses the euro, which is under the purview of the European Central Bank.

Even 17 years after the euro came into circulation, some Austrians are still finding notes and coins in their previous currency, the schilling, much of it left in forgotten hiding places in homes.

The haul from under the nation's mattresses, which until now could be exchanged at the "Euro-Bus" of the Austrian National Bank (OeNB), which toured the country, was almost 19 million schillings (1.38 million euros) this year.

Unlike several other parts of the eurozone, Austrians still have an unlimited period to exchange their schillings at the OeNB.

Austrian banks, too, are behind some of their counterparts elsewhere when it comes to the ease with which clients can access debit or credit cards.

And some banks are currently planning to equip the new debit cards with the ability to make payments online, as is common elsewhere.