Lawmakers in Austria's lower house of parliament, the National Council, approved on Monday the motion of no confidence against Chancellor Sebastian Kurz and his cabinet. 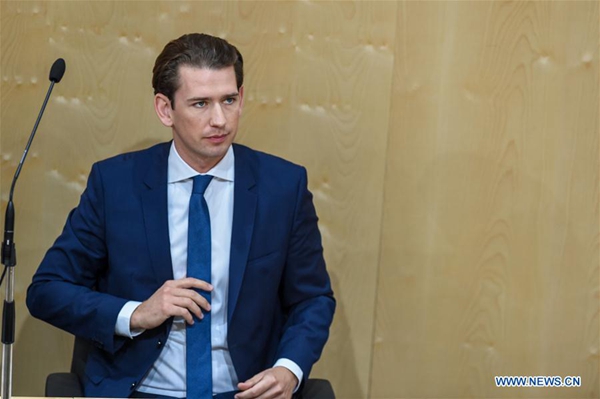 Austrian Chancellor Sebastian Kurz speaks at a session of Austria's lower house of parliament in Vienna, Austria, May 27, 2019. (Photo/Xinhua)

"Mr Chancellor, you and your ÖVP government do not enjoy the confidence of the SPÖ MEPs," said SPÖ leader Rendi-Wagner during the parliamentary debate on Monday.

The chancellor's actions were a "shameless, unrestrained and irresponsible grip on power," she said.

During the debate, sharp criticism of Kurz were also from the opposition factions FPÖ, NEOS and NOW.

Herbert Kickl, until recently still interior minister, now leader of the FPÖ parliamentary group, said what Kurz had done was "about the restoration of the old power axis of the ÖVP."

"This grasp for power is disgusting," he added.

Norbert Hofer, who had just been elected as head of the FPÖ by his party before the meeting, regretted the end of the turquoise-blue coalition. He criticized Kurz for his "selfish purposes of unlimited leadership".

Alfred Noll (NOW) also described Kurz as "unworthy of trust," and the multiple break of his promises to his coalition partners "disgraceful".

NEOS club boss Beate Meinl-Reisinger, whose group did not want to support any of the no-confidence motion, described the turquoise-blue experiment as failed.

The motion of no-confidence is the preliminary climax of the government crisis. It began with the publication of the scandal video of Ibiza, on which the former FPÖ leader Heinz-Christian Strache gave the impression of being open to abuse of power and corruption. Strache resigned from office on May 18, when the right-wing conservative government collapsed.

What happened on Monday also makes Sebastian Kurz - at least for the time being - the shortest serving Chancellor of the Second Republic. He replaced the previous record holder Christian Kern (SPÖ). A total of 525 days have passed since he was sworn in on December 18, 2017. Kern brought it to 580 days as head of government.

ÖVP parliamentary group chairman August Wöginger said he did not accept the SPÖ motion of no-confidence. "The Social Democratic party acts here against the people and also against the will of the Federal President," he said, adding "Today is a day that this wonderful country has not earned."

Kurz showed that he could well manage the country even in a difficult situation, according to Wöginger. In the European elections on Sunday he was clearly strengthened by the population, he said.

Austria now needs stability after the scandal surrounding the Ibiza video. "Red-blue does exactly the opposite today and plunges the country into chaos," warned Wöginger.

Kurz said he understood the desire for revenge of other parties, including the desire to put himself in a better position for the election. But that the motion of no confidence in response to the European elections is now extended to the whole Cabinet, which "no one in the country can understand."

He assured that the ÖVP would make a contribution to stability in the country even in the case of his stepping down. "We will certainly not put obstacles in the way of the next government but best support them."

The vote of no confidence is the strongest means of control for the National Council. After such a vote, the federal president must remove the relevant member of the government (or the entire government) of the Office, without any special justification being necessary.