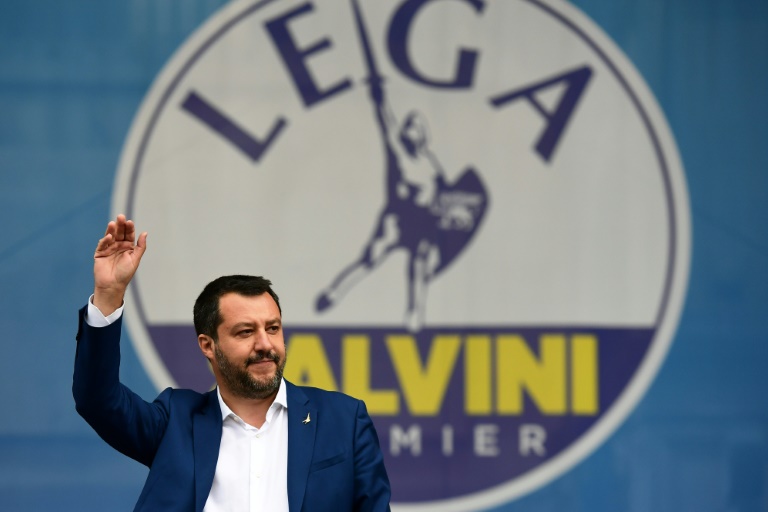 Italian Deputy Prime Minister and Interior Minister Matteo Salvini, who organised the rally, is trying to unite Europe's nationalists into a powerful force in the European Parliament. (Photo: AFP)

The Milan rally hoped to see leaders of 12 far-right parties marching towards their conquest of Brussels after next week's European parliamentary elections.

Headliners Salvini of the anti-immigrant League and Marine Le Pen of France's Islamophobic National Rally (RN) want their Europe of Nations and Freedom (ENF) group to become the third largest in Brussels.

"Our battle is against totalitarianism: globalisation and Islamism," Le Pen said ahead of the march.

Hundreds gathered in a Milan park for an anti-fascist counter-demonstration - "Welcome migrants, expel Salvini," read one banner - as the city's central Duomo square filled with League supporters massed under a light rain to listen to leaders' speeches.

But explosive graft allegations against the leader of Austria's far-right Freedom Party (FPOe) and vice-chancellor Heinz-Christian Strache meant the party's top candidate in next week's elections pulled out of the Milan rally.

Strache resigned and the FPOe's coalition with Chancellor Sebastien Kurz's centre-right People's Party (OeVP) is on the brink of collapse.

Despite their shared dislike of immigration, multiculturalism, the left and the EU, Europe's populists remain divided on many other key issues, including budgetary discipline, migrant distribution and relations with Moscow, as highlighted by the Austrian scandal.

In Milan, Le Pen was forced to say that her party obeyed French party finance rules, which she called "strict" and "questionable" as they prevented the RN from borrowing money outside Europe.

French lawmakers recently called for a probe into links between the RN and Donald Trump's former strategist Steve Bannon after he discussed paying back a Russian loan to Le Pen's party in a documentary.

Most of Europe's rightwing nationalists are currently divided into three blocs and a tangled web of alliances in the European Parliament -- an institution Salvini and Le Pen would like to overhaul if not destroy.

The ENF includes Austria's Freedom Party, Belgium's Vlaams Belang and the Netherlands' Party for Freedom, whose head Geert Wilders was also due in Milan.

Orban has voiced admiration for Salvini and promised "cooperation" after the vote, but refuses any alliance with Le Pen.

He has his own problems after allegations from a rights group Saturday that his election landslide last year was marred by vote-rigging and fraud.

Smaller parties such as Bulgaria's Volya or Slovakia's Sme Rodina, which is set to win a single MEP seat, are to join the Milan rally.

"The European elections are a referendum between life and death, between the past and the future, a free Europe and an Islamic state based on fear," Salvini told a recent rally.

While Salvini and Le Pen have close ties to Russia and President Vladimir Putin, eastern European far-right parties are wary of Moscow's ambitions.

Critics say that an enduring alliance between the League and the Alternative for Germany (AfD), also due in Milan, would be impossible.

"What's more, Meuthen doesn't want to give a single cent to southern Europe," he added.

Salvini hopes the future right-wing bloc will be able to implement laxer EU budget rules, which would be a boon for Italy's struggling economy.