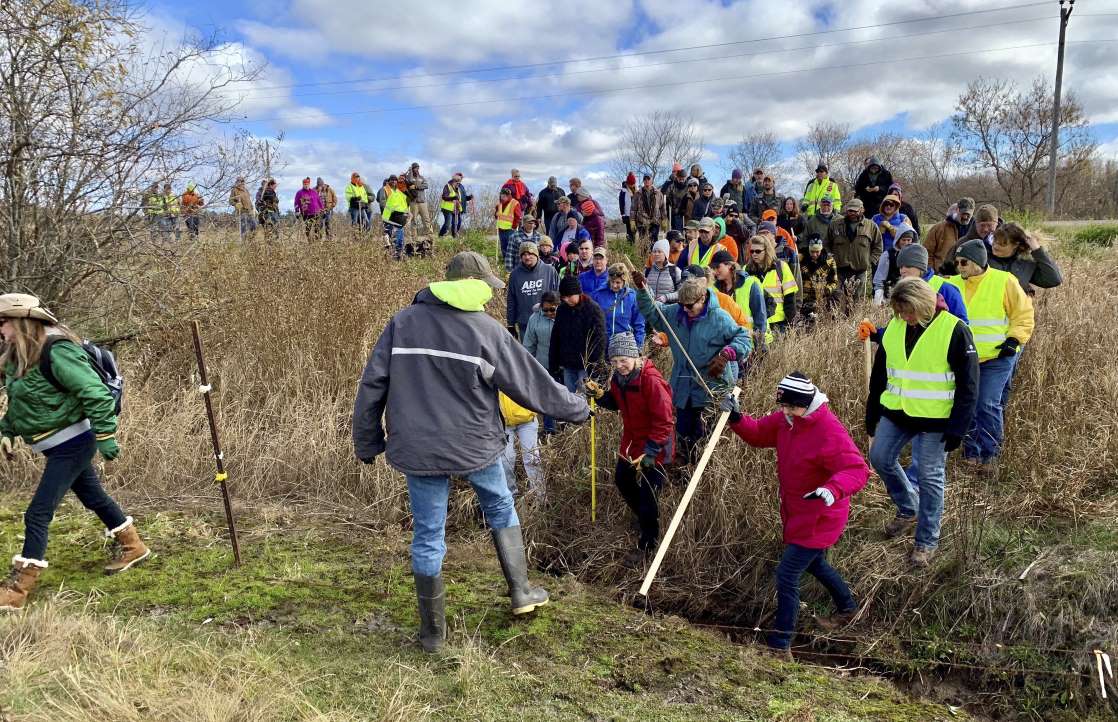 Associated Press Volunteers cross a creek and barbed wire near Barron, Wis., Tuesday, Oct. 23, 2018, on their way to a ground search for 13-year-old Jayme Closs who was discovered missing Oct. 15 after her parents were found fatally shot at their home. The search for Closs was expanded Tuesday, with as many as 2,000 volunteers expected to take part in a search of the area (Photo: AP)

Authorities offered a $25,000 reward Wednesday for any information leading to the location of a Wisconsin girl who disappeared last week after her parents were gunned down in their home.

Thirteen-year-old Jayme Closs has been missing since early on the morning of Oct. 15, when deputies responding to a 911 call from her mother's cellphone found Jayme's parents, James and Denise, dead inside the home. Jayme was nowhere to be found, and investigators believe she was abducted.

Justin Tolomeo, special agent-in-charge of the FBI's Milwaukee office, announced the award during a news conference in Barron on Wednesday afternoon.

"Please, if you have information, we want to hear from you," Tolomeo said.

Jayme's aunt, Jennifer Smith, used the news conference to speak directly to Jayme. She said the family misses her giggles, her grandpa needs her to draw fresh artwork to hang on his refrigerator and she still wants to take Jayme on a shopping date the two of them had planned. She even held up a bottle of Jayme's favorite iced coffee for the cameras.

"Jayme, not a moment goes by that we're not thinking of you and praying for you," Smith said. "We need you here to fill that hole in our hearts. We will never stop looking for you."

Investigators sometimes employ remarks from missing people's family members in the hopes of humanizing them in their captors' eyes and making them pause before inflicting harm.

Scores of law enforcement officers have been working around the clock to find Jayme. Barron County Sheriff Chris Fitzgerald said at the news conference that investigators had received 1,550 tips so far and have closed out 1,250 of them. The only lead authorities have discussed publicly is a vague description of two vehicles that might have been in the area the night Jayme disappeared — a red or orange Dodge Challenger and a black Ford Edge or Acura MDX.

Authorities also have used hundreds of volunteers to conduct two ground searches in the area, the most recent on Tuesday. Neither search yielded any clues.

The sheriff added that a new evidence collection team went through the Closs home on Wednesday to ensure previous forensic analysts didn't miss anything. The new team removed what Fitzgerald called "items" but he did not elaborate.

"We believe Jayme's out there, Jayme's endangered and we need to bring a 13-year-old girl home," the sheriff said.