LOS ANGELES — The Latest on an active police situation at a Trader Joe’s in Los Angeles (all times local): 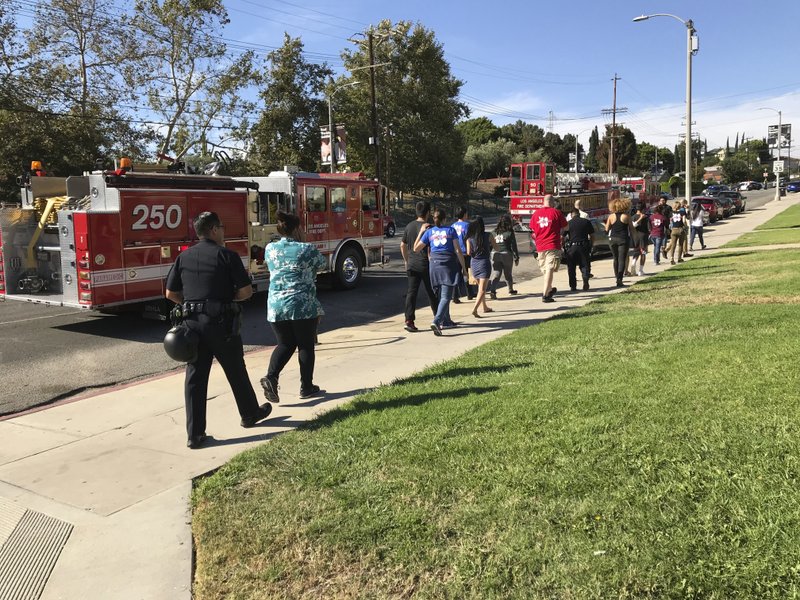 A Los Angeles Police Department officer escorts Trader Joe's employees to the Silver Lake Community Church, a block away from their Trader Joe's store in Los Angeles Saturday, July 21, 2018. Police believe a man involved in a standoff at the Los Angeles supermarket shot his grandmother and girlfriend and then fired at officers during a pursuit before he crashed into a utility pole outside the supermarket and ran inside the store. (Photos: AP)

Authorities say a woman was fatally wounded when a gunman being chased by police in Los Angeles fled into a supermarket and took hostages.

The gunman, who was not identified, surrendered following a three-hour standoff. Details on how the woman died inside the store were not immediately known.

Authorities say earlier Saturday the man shot his grandmother and girlfriend. He then fled in a car with officers pursuing him through the city.

The chase ended with him crashing the car outside the store and heading into the store. Gunshots were fired during the chase.

Witnesses say employees and customers inside Trader Joe’s ran or jumped out of windows to get to safety.

A gunman who led police on a pursuit and then ran into a Los Angeles supermarket, holding bystanders inside hostage, has been taken into custody.

The suspect walked out of the Trader Joe’s in the city’s Silver Lake neighborhood with a cluster of hostages Saturday afternoon and was immediately surrounded by officers. He appeared to be handcuffed when he walked out.

Authorities say the man shot his grandmother and girlfriend earlier in the day. He then fled in a car with officers pursuing him through the city.

The chase ended with him crashing the car outside the store and heading into the store.

Witnesses say employees and customers inside Trader Joe’s ran or jumped out of windows to get to safety.

About three hours later, the man walked out alongside four hostages who had their hands up.

A 91-year-old man is among those who escaped from a Los Angeles supermarket after a gunman ran inside.

Don Kohles was walking into the Trader Joe’s in the city’s Silver Lake section Saturday afternoon when a car being chased by police crashed into a pole just outside.

Kohles says police fired at the male driver and shattered the store’s glass doors. Kohles says he and others inside took cover and laid on the floor as the suspect ran inside.

Kohles says the man ran toward the back of the store and yelled at people inside but he never heard any more gunshots.

Kohles he was terrified and others around him were sobbing. After about 30 minutes, he says police came him and rushed them outside.

Police believe a man involved in a standoff with officers at a Los Angeles supermarket shot his grandmother and girlfriend before firing at officers during a pursuit, then crashing outside the supermarket and running inside the store.

Officer Mike Lopez, a police spokesman, says the man had fled from the scene after the Saturday afternoon shooting in South Los Angeles.

He says officers tried to pull the man over and were led on a pursuit. Lopez says the suspect shot multiple rounds at officers during the chase but no officers were struck.

At least one officer returned fire.

Lopez says the man crashed outside of a Trader Joe’s supermarket in Silver Lake and then ran into the store.

He says the situation is still unfolding and it isn’t clear if employees are still inside the store.

Bystanders in the area of a Los Angeles Trader Joe’s that is surrounded by police and emergency vehicles say someone fired off gunshots outside.

Lorraine Perrotta, who lives in the Silver Lake neighborhood, says she was getting ready to park her car Saturday afternoon when she heard six gunshots.

Some witnesses took to social media.

Devin Field, a writer for “Jimmy Kimmel Live,” tweeted he was walking inside when a car crashed into the entrance and a man “got out shooting.”

Los Angeles police say there is an “active” incident at the store and that the public should stay clear of the area. Some people could be seen exiting the store through a side window and down a ladder.

A large number of police and rescue personnel were responding to a Los Angeles supermarket, amid numerous media reports of possible gunshots.

The Los Angeles Police Department tweeted there was an “active incident” at a Trader Joe’s in the Silver Lake area.

An Associated Press employee who lives in the area reported seeing a crashed car into a utility pole outside the store.

One tweet showed people attempting to exit the Trader Joe’s out a window. Other views from TV helicopters showed people leaving through the front door with their hands up.

No further details were immediately available.

Cover image: police officers use a mirror to see inside a Trader Joe's store in the Silver Lake neighborhood of Los Angeles on Saturday, July 21, 2018. Police believe a man involved in the standoff with officers shot his grandmother and girlfriend before firing at officers during a pursuit, then crashing outside the supermarket and running inside the store.