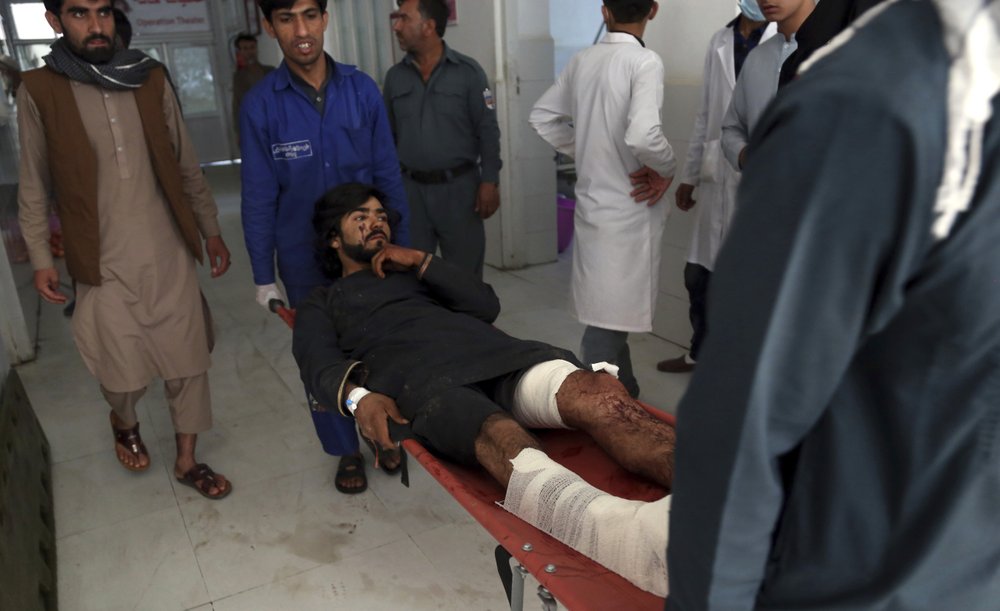 Separate attacks by suicide bombers — one targeting President Ashraf Ghani’s election rally and a second that ripped through the center of the Afghan capital — killed at least 48 people and wounded scores more Tuesday in the deadliest single day since a peace agreement with Taliban insurgents was declared dead.

The Taliban claimed responsibility for both blasts, saying an explosives-laden motorcycle targeted Ghani’s election rally being held on the outskirts of Charakar in northern Parwan province. Ghani was present but unhurt, his campaign chief said. In that explosion, 26 people were killed, according to Nasrat Rahimi, spokesman for the Interior Ministry. Four among the dead were Afghan military personnel, he said. Another 42 people were wounded, many of them women and children.

In the second bombing, just hours later in the heart of Kabul not far from the US Embassy, the Taliban said they were targeting an Afghan army base. They killed 22 people, government officials said. Scores more were wounded.

The violence comes as Afghanistan faces presidential elections on Sept. 28 — a vote the Taliban vehemently oppose. The insurgent group has warned Afghans not to vote in the election and said their fighters would target election campaigns as well as polling stations.

The bomber who attacked Ghani’s rally detonated his explosives at the entrance to the rally, according to Hamed Aziz, a spokesman form Ghani’s campaign office. But Aziz said the explosion occurred some distance from where Ghani was addressing a crowd of about 2,200.

“By continuing their crimes, the Taliban have once again proven that they have no will and desire for peace and stability in Afghanistan and that all their movements are nothing but deceit,” Ghani was quoted as saying in a statement released by the presidential palace.

There were many women and children among the casualties in the bombing near Ghani’s rally, said Dr. Qasim Sangin, a local official.

Firdaus Faramarz, spokesman for the Kabul police chief, said the attack in the heart of the Afghan capital took place near Massood Square, a deeply congested intersection in the center of Kabul. NATO and US compounds are located nearby as are several Afghan government ministries.

Zabihullah Mujahid, a Taliban spokesman, released a statement to the media saying Taliban suicide bombers were behind both attacks.

In Parwan, Mujahid said the bomber targeted presidential guards who were protecting Ghani and the rally, along with other members of the security forces. Four military personnel were among the dead.

Campaigning for the Afghan elections resumed last week after President Donald Trump declared that the US-Taliban talks, which have been going on for months in the Gulf Arab state of Qatar, are over.

Most presidential candidates had suspended their campaigns while negotiations were taking place and as the US peace envoy, Zalmay Khalilzad, said a deal was all but signed.

Trump’s tweets at the beginning of September declaring the deal and the talks were “dead” launched the war-battered nation on an election campaign.

Ghani, who had been sidelined during much of the talks between Khalilzad and the Taliban, resumed campaigning immediately and had been steadfast in his demand that presidential polls should take place.

Khalilzad and some of Ghani’s rivals, however had talked of establishing an interim administration to run the country while a peace deal was implemented.

In the aftermath of the scrapped talks, Afghans braced for what many expected to be an increase in violence. The Taliban have refused to discuss a cease-fire and have stepped up attacks across the country. Meanwhile, Afghan forces backed by their US allies have intensified raids on militant hideouts in recent weeks.

The Taliban have also refused to meet with representatives of Ghani’s government for talks but it was two attacks in Kabul in recent weeks that caused Trump to halt the negotiations with the Taliban, including one that killed two NATO soldiers, one of whom was an American. Another US soldier died in combat in Afghanistan on Monday.

Monday’s death was the 17th US combat death in Afghanistan this year, according to the Pentagon’s count. There also have been three non-combat deaths this year. More than 2,400 Americans have died in the nearly 18-year war.

Even as the bombs went off in Afghanistan, the Taliban were on the move looking for support.

On Tuesday, the Afghan Taliban were in Iran visiting officials in Tehran, while last week they were in the Russian capital holding consultations with Zamir Kabulov, President Vladimir Putin’s envoy for Afghanistan.

Iran’s semi-official Borna news agency on Tuesday quoted the spokesman of the Foreign Ministry there, Abbas Mousavi, as saying the Afghan delegation discussed “the latest” developments with Iranian officials.