Azerbaijan said Sunday that its forces had captured the key town of Shusha from Armenian separatists in Nagorno-Karabakh, but Armenia insisted that fighting continued for the strategic area. 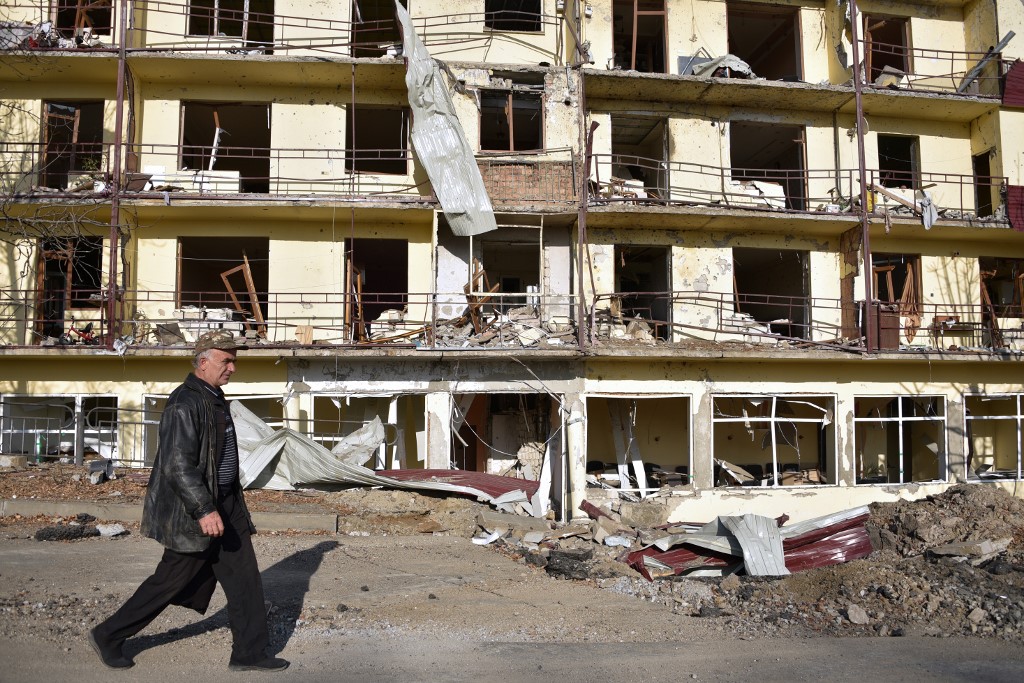 A man walks past a damaged residential building in the historic city of Shusha on November 1, 2020. (File photo: AFP)

The capture of Shusha, known to Armenians as Shushi, would be a major victory for Azerbaijan six weeks after fighting erupted anew over Nagorno-Karabakh, an ethnic Armenian enclave that broke away from Azerbaijan's control in the 1990s.

The fortress town sits on cliffs around 15 kilometers (nine miles) from Nagorno-Karabakh's largest city Stepanakert and on the main road to Armenia, which backs the separatists.

Both sides have reported fierce clashes around the town after Azerbaijani forces swept across the southern flank of Nagorno-Karabakh and pushed through its mountain passes.

In a televised address to the nation on Sunday, Azerbaijani President Ilham Aliyev said it had been captured.

"With great pride and joy, I inform you that the town of Shusha has been liberated," said Aliyev, dressed in military fatigues and standing in front of an Azerbaijani flag.

"Our liberation march continues. We will go to the end, until the complete liberation of the occupied territories," Aliyev added.

Armenian officials denied the stronghold had fallen, with defence ministry representative Artsrun Hovhannisyan saying that despite substantial Azerbaijani reinforcements, "tomorrow, with God’s help, the battle for Shusha will end.

"We became technically better and stronger, we were able to neutralise the enemy's technological advantage," he insisted.

"And in the end, we fight at home ... and winter is coming," the official said.

Flag-waving Azerbaijanis celebrated in the capital Baku after Aliyev's announcement however, with cars honking their horns as residents crowded along city streets despite coronavirus restrictions.

"I did not leave the house for a week, but today I came out to say that Shusha has been liberated. We are happy, congratulations to all my people," said 32-year-old Baku resident Shargiya Dadashova.

"Despite heavy destruction, the fortress city withstands the blows of the adversary," it said.

In the Armenian capital Yerevan, residents said they did not believe the town had been taken.

"To know who controls Shusha we will listen to the commanders of our army, not Aliyev," 50-year-old Arman said on the city's central Abovyan Street.

"In any case I can assure you that the war will not be finished if the Azerbaijanis take Shusha."

Shusha had been a majority Azerbaijani city before the 1990s conflict and became a rallying cry for officials in Baku promising to retake Nagorno-Karabakh.

New clashes broke out in late September between Azerbaijan and Armenian-backed separatists over Karabakh, which declared its independence nearly 30 years ago.

That declaration has not been recognised internationally, even by Armenia, and it remains a part of Azerbaijan under international law.

The recent fighting has been the worst in decades, with at least 1,000 people killed including dozens of civilians, with the death toll believed to be much higher.

Several attempts by Russia, France and the United States have failed to achieve a ceasefire.

The three countries make up the "Minsk Group" that helped broker a truce between the ex-Soviet rivals in 1994 but has not found a lasting solution to the conflict.

Turkey is a key ally of Azerbaijan and Erdogan has congratulated Baku after its claim of retaking Shusha, calling it "a sign that the liberation of the rest of the occupied territories is near".

Turkish involvement would be key to any agreement to halt the fighting. There were reports Sunday of a plan to agree a ceasefire and deploy Russian and Turkish peacekeepers to Nagorno-Karabakh.

Ankara has been a fierce supporter of Azerbaijan, a fellow Muslim and Turkic country, while Moscow has a defence pact with Armenia and a military base on its territory.

Aliyev met Sunday with the Turkish foreign and defence ministers in Baku.

Dmitry Trenin, a political analyst and head of the Moscow Carnegie Center, said the conflict had reached a "decisive point".

"Russia and Turkey are finalising the modalities of (a) ceasefire, Armenian withdrawal, corridors and peacekeepers," he wrote on Twitter. "New regional order is being sealed."