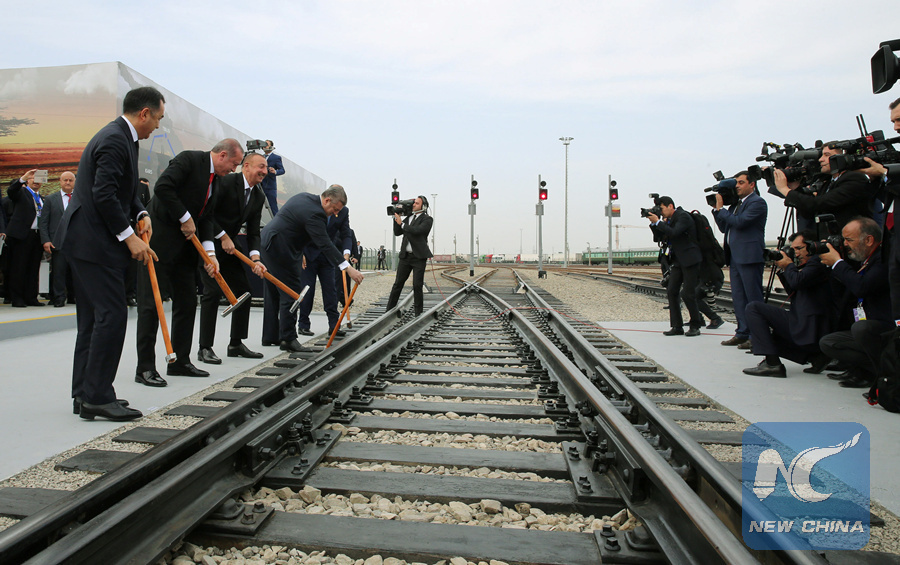 Top leaders of Azerbaijan, Turkey and Georgia opened on October 30 a newly built railway line which connects the three countries in Azerbaijan's capital city of Baku, linking central Asia and Europe through the Caucasus region.

The opening of the 826-km Baku-Tbilisi-Kars railway line marks the conclusion of a 10-year project to open a rail corridor carrying cargo and passengers between the two continents.

The railway line, which includes 105 km of new track, will have the capacity to annually transport 1 million passengers and 6.5 million tons of freight at the initial stage.

Addressing the opening ceremony, Azerbaijan's President Ilham Aliyev called the opening of the railway line an event of "historic and strategic significance," saying the project will play an important role in ensuring stability and security in the region.

The project build the railway was launched in 2007 with an agreement between Azerbaijan, Georgia and Turkey. Its completion had been postponed several times since 2011.

Starting in Baku, trains will stop in the Georgian capital city of Tbilisi, pass through gauge-changing facilities in the Georgian town of Akhalkalaki and end their journey in the Turkish town of Kars before feeding into Europe beyond.

The railway line is also designed to become a key part of the southern route of the emerging New Silk Road network of trade and transport corridors between China and Europe.

The official ceremony was followed by an open-air inauguration. The participating guests witnessed the first trains decorated with the flags of Azerbaijan, Turkey, Georgia, Kazakhstan and Uzbekistan departing from the railway station.