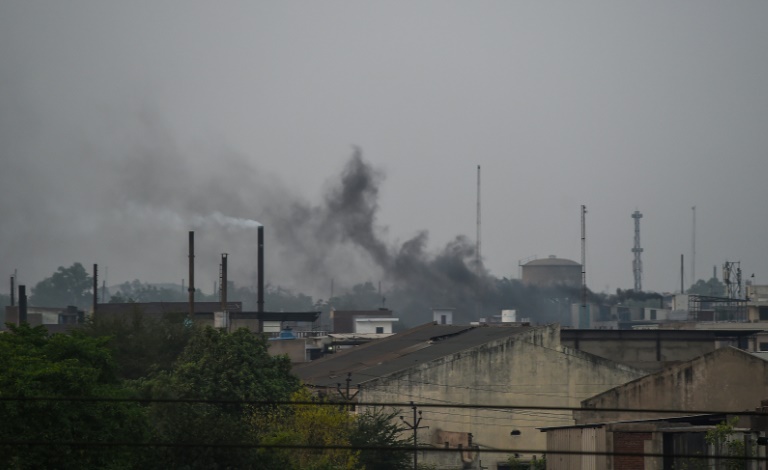 A WHO report named Kanpur as the city with the world's worst air pollution (Photo: AFP)

Soot turned the white handkerchief around Abhash Kumar Sharma's face to black as the police officer tried to direct gridlocked traffic in the Indian city with the world's dirtiest air.

It was all he had to ward off the pollution blamed for filling Kanpur's hospital beds with growing numbers of chronic lung and cancer cases.

"It is the same story for everyone who spends such long hours out in this city," said Sharma, who does not get a mask for his duties.

"The pollution gets into your eyes and it often stings."

The city of three million people has been smarting since a World Health Organization (WHO) report last month put it at the head of 14 Indian cities in the world's top 15 with the dirtiest air.

The pain has building up for much longer, but as the world marks Environment Day, the fallout has reached crisis point for many in Kanpur.

Sunil Dahiya, senior campaigner with Greenpeace India, said "the models available to us make it certain that hundreds of thousands of people are dying in India each year because of air pollution".

"More than 50 percent of these patients, maybe more, come with breathing-related issues," the doctor told AFP.

"Even the severity is worsening. Many who earlier recovered in a day or two now need days and much stronger medication to get better."

The number of chronic pulmonary disease and lung cancer cases is rising among non-smokers, particularly women, he added. "There is no reason for it (other) than primarily atmospheric pollution."

Children under five are also suffering more, he added.

In one overcrowded ward, 74-year-old Ram Lakhan, who spends long periods in hospital barely able to breathe, blamed his suffering on cars.

"Where are the trees now? We only have vehicles, pollution and traffic jams.

"With all the greenery gone, we are only breathing what is available -- pollution," he said.

"I've never had it this bad before. I only used to feel breathlessness and discomfort in bad winters, when there was smog. But it has been hard even in summers for the last two or three years," he added.

In the crippling traffic, it took an hour to drive the seven kilometres (four miles) from the hospital to the Uttar Pradesh state pollution control office where chief officer Kuldeep Misra also took aim at the 1.15 million vehicles on city roads.

"This is an industrial city but vehicles here pollute more than industry," he said.

Misra was sceptical about Kanpur being the world's dirtiest city as the UN report was based on "old data".

"The report caused ripples," he acknowledged. "But we're not sure about the tag."

The WHO report was based on 2016 Indian data on the number of particles under 2.5 micrograms -- the smallest and most dangerous.

It said Kanpur had an average PM2.5 concentration of 173 micrograms per cubic metre -- about seven times the normal safe level.

Misra believes Kanpur's water pollution is worse than the air because of its huge leather industry and tanneries.

The tanneries are often blamed for polluting the revered Ganges river, which passes through the city.

Misra said the authorities planned to take action, but it would take time.

"There is no magic wand," he added.

Time may not be on the side of 50-year-old Shiv Kumari, a patient at the overcrowded chest hospital who wears an oxygen mask to help her breathe.

"Pollution, dust or smoke makes me breathless. I feel that I am choking. I cough and feel as if something sharp is pinching my throat," she told AFP.

"It has become too difficult to live in this kind of an atmosphere. Look at this machine," she said, pointing to her automatic breathing aid that cost more than $1,500.

"How can a poor person afford something like this, especially when it's so important for survival in this pollution?"

"The government should do something to fix this," she added before readjusting her mask as she started feeling breathless again.