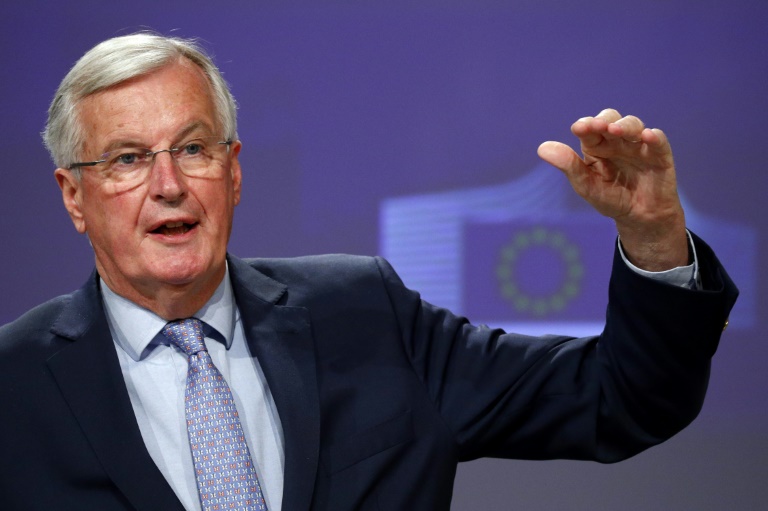 The EU and Britain have until the end of the year to reach a deal on future ties. (Photo: AFP)

Britain and the EU will attempt to revive their imperilled trade talks on Tuesday, entering a crucial week of negotiations that could mark the final hope for a deal.

Hundreds of officials will hold video talks all week from London and Brussels, the fourth and last scheduled round of negotiations since Britain formally left the EU on January 31.

The previous round ended in acrimony with the EU Brexit negotiator Michel Barnier asking his UK counterpart David Frost to watch his "tone" in a tetchy exchange of letters.

The EU and Britain have until the end of the year to reach a deal on future ties, without which trade links could be seriously compromised, even as the fallout from the coronavirus saps their economies.

According to the terms of the divorce, the two sides have until the end of the month to decide whether to extend the talks by one or two years, but this idea has been rejected by Britain.

June will also see a special summit to assess the talks, at which British Prime Minister Boris Johnson would work out the best way forward with EU chiefs Ursula von der Leyen and Charles Michel.

This high-level meeting was foreseen in the political declaration that was signed alongside the Brexit withdrawal agreement in October, but no date has yet been set.

Asked about next week's talks, Barnier said Britain will have to reveal its true intentions.

"I expect that I will find out whether the United Kingdom wants to leave the single market at the end of this year with an agreement or without one," he told Germany's Deutschlandfunk radio.

The talks have snagged on the same issues from the start.

Britain refuses to make commitments to match EU standards on health, environment, state aid and other concerns in order to win the deal -- something known as maintaining the level playing field.

London wants a standard trade deal similar to those given to Japan, Canada and South Korea and refuses the EU's call for a far-reaching structure that would also encompass security, research and defence.

"What the EU is asking of us is unprecedented in any of the free trade agreements that they signed, or indeed contemplated signing, with other economies," senior UK minister Michael Gove told British lawmakers.

The Europeans fear that a Britain unshackled from EU standards but enjoying zero-tariff trade ties could become a backdoor for companies to compete unfairly in the EU single market.

And, at the urging of France, the EU is pushing hard for an ambitious deal on fishing in which EU vessels could enjoy the same access to British waters as they did before the divorce.

"We will be quickly fixed on the outcome, by Tuesday or Wednesday, depending on the tone of the discussions," said a source close to the negotiations.

Stefaan de Rynck, an adviser to Barnier, said there was little chance for a breakthrough with the level playing field the crux of the matter.

He urged Britain to "demystify"  the issue and not to see the EU's stance as a threat on British sovereignty.

"I think we need to move beyond the kind of idea that signing up to international commitments that are legally binding would have some kind of threat to national democracy," he told a panel at the Institute for Government think-tank.

"Perhaps the United Kingdom have come to the conclusion that there's not going to be a deal. I hope not," Hogan told MEPs earlier this week.

"Perhaps this is more strategic than substance, but we certainly need confidence building measures in the next round of negotiations," he said.