Baghdad curfew lifted but Iraq on alert for new protests 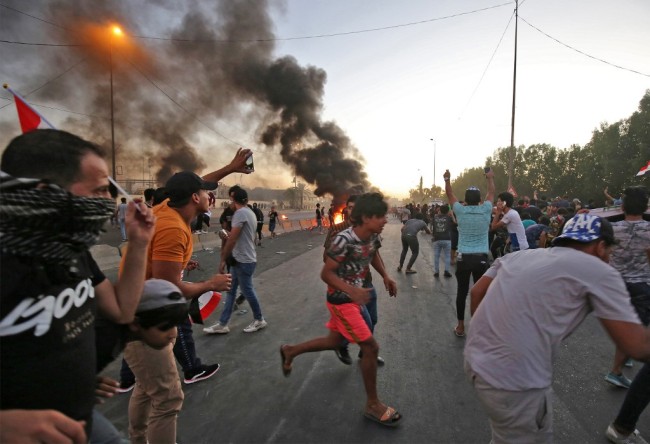 The Iraq government lifted the daytime curfew in Baghdad on Saturday but access roads to major squares remained blocked for fear of further deadly protests.

The death toll from mass protests in Baghdad and cities across southern Iraq rose to 93 as the unrest entered its fifth day, parliament's human rights commission said.

More than 4,000 people have also been wounded since the protests against chronic unemployment, poor public services and widespread corruption erupted in the capital on Tuesday, the commission said.

A total of 540 demonstrators have been arrested, of whom nearly 200 remain in custody, the panel added.

Prime Minister Adel Abdel Mahdi ordered the curfew in the capital lifted from 5 am (0200 GMT) although an internet blackout remained in force.

Shoppers trickled back onto the streets to buy vegetables and other perishable goods the price of which had doubled since the deadly protests started.

Municipal street cleaners set about clearing the detritus of the four days of running clashes between protesters and riot police, which has seen breeze blocks and burning tyres strewn across major thoroughfares.

Riot police blocked traffic between Tahrir (Liberation) Square and other gathering points as authorities waited to see whether a call from firebrand cleric Moqtada al-Sadr for the government to quit would bring his supporters out on to the streets.

The well-organised Sadrists have been a mainstay of most of the major protest movements of recent years.

As parliament prepared to convene later on Saturday, an onlooker who ventured out, Abu Salah, 70, was not convinced the protests were over.

"If living conditions don't improve, the protesters will be back," he said.