Baghdad mob kills teen gunman and strings up his corpse 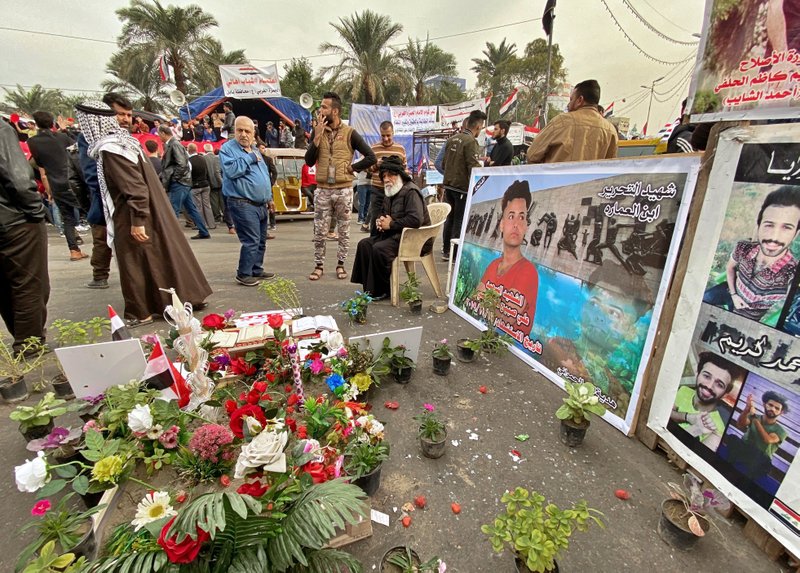 Posters of Anti-government protesters who have been killed in demonstrations are displayed in Tahrir Square during ongoing protests in Baghdad, Iraq, Thursday, Dec. 12, 2019. (Photo: AP)

An angry mob killed a 16-year-old and strung up the corpse by its feet from a traffic pole after the teen shot and killed six people Thursday, including four anti-government protesters, Iraqi officials said.

Dozens of people pointed their cellphones at the body dangling high above them in a central Baghdad square. Videos circulating on social media showed the young man being beaten and dragged across the street.

The violence underscored the growing fears and suspicions swirling around the 8-week-old protest movement, which engulfed Iraq on Oct. 1 when thousands took to the streets to decry government corruption, poor services and scarcity of jobs.

A string of mysterious acts of bloodshed by unknown groups has put anti-government protesters on edge and eroded their faith in the ability of state security forces to protect them.

In recent days, abductions and assassinations of high-profile civil activists have stoked paranoia among demonstrators. Protesters largely blame Iran-backed militias for the attacks and see the violence as a campaign to instill fear and weaken their peaceful movement.

The exact circumstances of Thursday’s bloodshed were not clear, with different versions circulated throughout the day. The violence began when the young gunman opened fire in Baghdad’s Wathba Square, killing two shop owners and four protesters.. Security officials said the teen was wanted by police on drug-related charges and was running from security forces at the time.

However, other videos showed security forces with pointed guns surrounding a house where the teen had taken cover, suggesting he may have been killed by police.

Influential Shiite cleric Muqtada al-Sadr called those who killed the teen “terrorists” and warned that if they were not identified within 48 hours, he would order his militia to leave the square. Members of Saraya Salam, or Peace Brigades, are deployed in the square to protect protesters. Protesters refer to them as the “blue hats.”

The killing of the teenager was condemned by the wider protest movement in Tahrir Square, which said in a statement that the perpetrators were not part of their peaceful demonstrations.

“We can’t allow the image of our pure revolution to be distorted, so we declare that we are innocent as peaceful demonstrators to what happened this morning in Wathba Square,” the statement said.

Separately, security and health officials said a suicide bomber blew himself up near the city of Samarra, north of Baghdad, killing seven fighters from a paramilitary group and wounding six. The officials, speaking on condition of anonymity in line with regulations, said the attack occurred in a camp belonging to the Saraya Salam group.

There was no immediate claim of responsibility for the attack Thursday night.