A volcano on the Indonesian holiday island of Bali erupted Sunday, belching ash high into the air and over nearby villages as officials warned tourists to keep clear of the area. 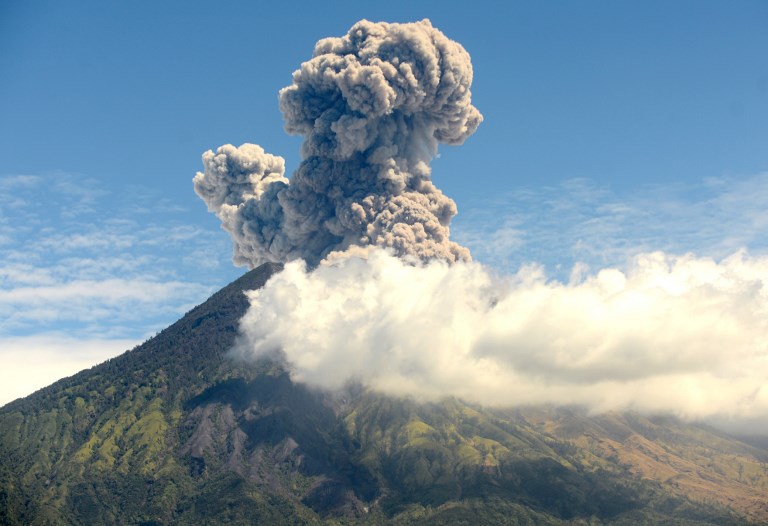 A plume of fresh ash is released as Mount Agung volcano erupts at the Kubu subdistrict in Karangasem Regency on Indonesia's resort island of Bali on July 6, 2018. (File photo: AFP)

Mount Agung has been erupting periodically since it rumbled back to life in 2017, when it grounded hundreds of flights and left 120,000 visitors stranded.

On Sunday morning, the volcano -- which is about 70 kilometres (44 miles) from the tourist hub of Kuta -- sent ash skywards as it erupted for about three minutes, according to the country's volcanology centre.

"Residents near Mount Agung as well as climbers and tourists should not carry out any activity in the danger zone or within four-kilometre radius from the crater," the centre said in a statement.

On December 22, an eruption from Anak Krakatoa triggered a tsunami which hit the western tip of the neighbouring island of Java and southern Sumatra, killing at least 426 and leaving more than 7,000 injured.

In the latest eruption, several villages on Bali were covered in a thin layer of ash but no smoke or lava was detected coming from the crater and no evacuation has been ordered.

The volcanology centre also warned residents near rivers in the area to be on alert for cold lava flows -- a type of mudflow that can form from rock and ash in the rainy season and which is often a prelude to the blazing orange lava of popular imagination.

In June, dozens of flights were cancelled after Agung erupted and shot a fresh plume of smoke and ash more than 1,000 metres (3,300 feet) into the sky.

Agung's last major eruption in 1963 killed around 1,600 people. Indonesia is the world's most active volcanic region and lies on the Pacific "Ring of Fire" where tectonic plates collide, causing frequent volcanic and seismic activities.