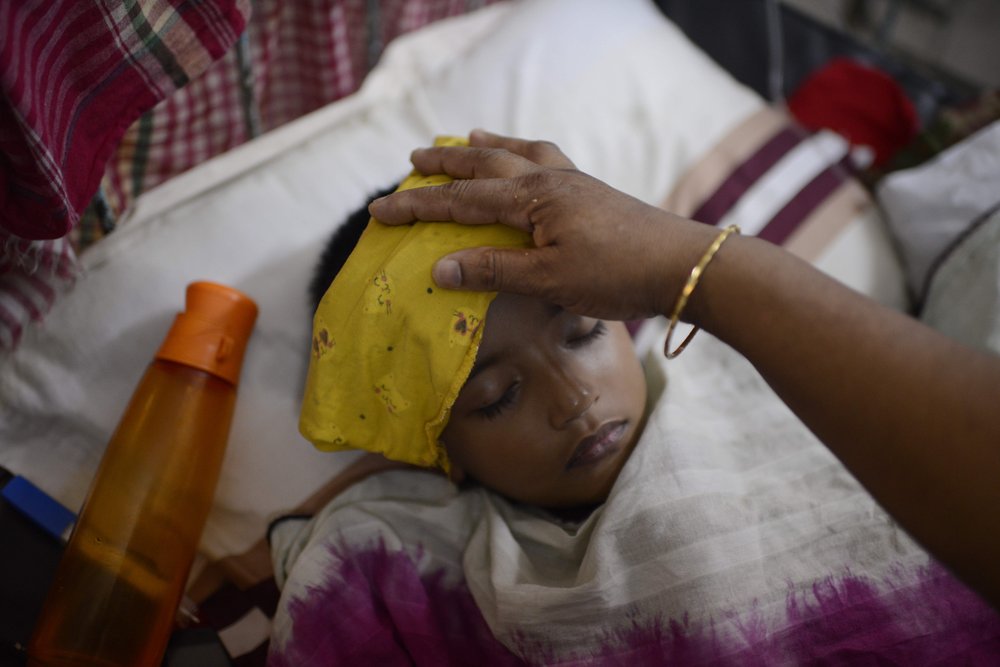 Bangladesh is facing its worst-ever dengue fever outbreak as hospitals are flooded with patients, putting a severe strain on the country’s already overwhelmed medical system.

The mosquito-borne viral infection has spread across the country, with 61 out of 64 districts reporting dengue cases by late Tuesday.

The government has confirmed 15,369 dengue cases since Jan. 1. Of those, 9,683 patients were diagnosed between July 1 and July 30. As of Tuesday, about 4,400 patients, including many children, were undergoing hospital treatment. There have been 14 deaths.

Officials from Dhaka, the overcrowded capital and the epicenter of the outbreak, have struggled to contain it, drawing criticism and spreading panic among some residents.

Dengue is found in tropical areas around the world and is spread by a type of mosquito that mainly lives in urban areas. The virus causes severe flu-like symptoms, and while there is no specific treatment for the illness, medical care to maintain a person’s fluid levels is seen as critical.

There are fears that the situation in the countryside will worsen as many residents of the city travel to villages to celebrate Eid-ul-Adha next month. Infected humans can serve as a source of the virus for uninfected mosquitoes.

Ayesha Akhter, assistant director at the Directorate General of Health Services under the Ministry of Health, said an outbreak of dengue has accompanied every monsoon since 2000, but this year’s situation is the worst.

A DGHS study identified a six-fold increase in the Aedes aegypti mosquito population in four months in Dhaka as the primary cause of the larger-than-average outbreak.

Earlier this month, the World Health Organization said the dengue situation in Bangladesh was “alarming but not out of control.”

Other countries in Asia are also facing a surge in dengue cases this year, including Thailand, where 53,699 cases and 65 deaths were reported as of July 23.

Nevertheless, with dengue cases soaring in recent weeks, Dhaka hospitals have been running out of room and manpower to treat new patients.

Prof. Abul Kalam Azad, director general of DGHS, said they had asked the hospitals to increase beds for dengue patients and to open dengue wards. The government also halved the charges for diagnosing dengue and directed public and private hospitals, clinics and diagnostic centers to do the same.

Prof. Uttam Kumar Barua, director of Shaheed Suhrawardy Medical College and Hospital, another major public hospital in Dhaka, said they were relying on senior medical students to assist doctors in the face of so many patients.

“We don’t have manpower, logistic support and technicians as much as needed. That’s why we are having too much pressure. We have three times more patients than our bed capacity,” Barua said.

He said they were admitting every dengue patient who entered the hospital but could not provide beds or even seats for everyone, adding that many had been asked to wait in hospital corridors and verandas.

Champa Begum took her 8-month-old to Shaheed hospital on Wednesday.

“I have other kids. I go to work leaving this one to another child. I have no way but to work,” she said. “I can’t take care of this child properly. This child is laid down anywhere. My home is above dirty water. That how this one was bitten and got dengue.”

“The government is working to tackle dengue,” she told an emergency meeting of her ruling Awami League party via teleconference from London, where she was on an official visit.

“I urge everyone to keep their houses and surrounding areas clean. That will save us from the disease,” she said.

The country’s opposition parties and urban planning experts blamed the central and local government’s lack of preparedness for the rise in dengue cases. People have taken to Facebook to vent their anger about city authorities’ failure to control dengue-carrying mosquitoes.