The death toll from a terrifying blaze that ripped through a Bangladesh high-rise rose on Friday to 25, as authorities vowed tough action to improve safety standards. 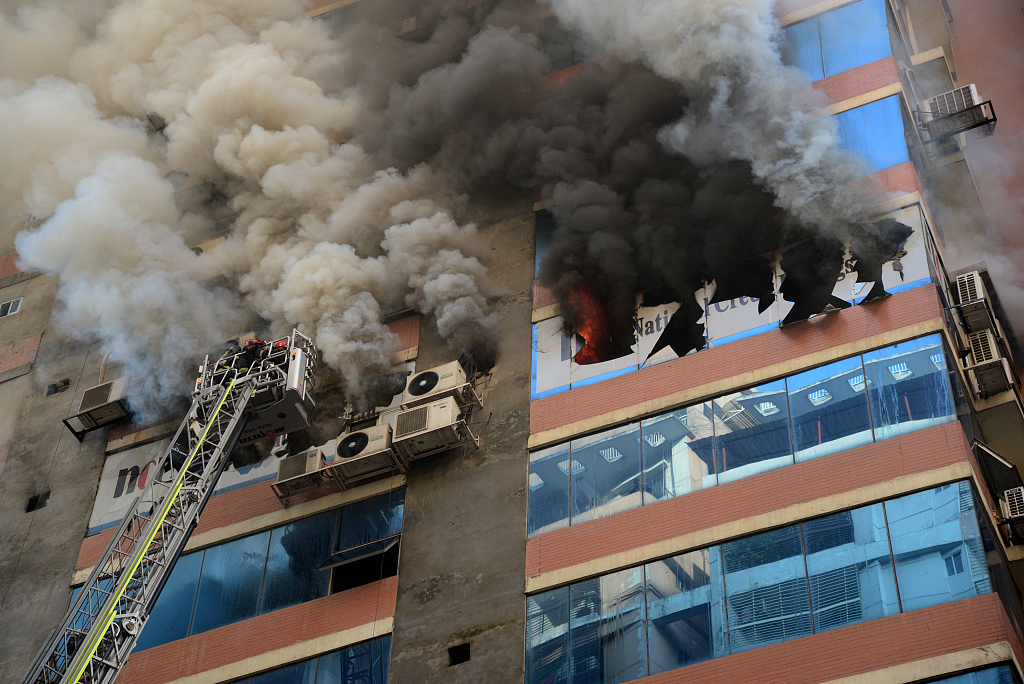 The latest fire to hit Bangladesh's congested capital Dhaka tore through the 22-storey FR Tower on Thursday, leaving some of the hundreds trapped inside screaming for help as horrified onlookers massed outside.

Some of those stuck inside made it to safety by sliding down cables on the side of the building, but others took their chances and jumped in a bid to escape the smoke and heat.

At least six people including a Sri Lankan national died in this way, officials said.

Firefighters backed by military specialists -- some in helicopters -- tackled the flames, lowering ropes to help people escape, while rescuers on long ladders smashed through windows.

But fire fighters were hampered by not having ladder cranes big enough to reach the top floors, officials said.

The fire was later extinguished and on Friday fire fighters completed the process of combing through the gutted and blackened floors of the building.

The fire department initially put the death toll at 19 but police said Friday that six more had perished. Another was in a critical state in hospital.

There was no immediate indication if others are missing, but more than 70 people were treated in hospital in the wake of the blaze.

Last month at least 70 people were killed in Dhaka apartment buildings where chemicals that were being illegally stored exploded -- unleashing a blaze that took more than 12 hours to control.

An even bigger tragedy was narrowly avoided, with investigators finding hundreds of chemicals drums in one of five blocks engulfed by the fire which could easily had exploded.

Following Thursday's fire, in the upmarket Banani commercial district, authorities have ordered a probe into claims that the building lacked fire equipment, its fire exits were inadequate and it had been illegally extended.

Police said that they wanted to interview the owner of the office block, with Housing Minister Rezaul Karim saying a murder case would be filed against those to blame for the tragedy.

"Definitely this is murder. It is not an accident. (A) Murder case will be filed against those who are responsible. Nobody will escape the law," he said.

"Now it's time for action. We have sent notices to building owners asking for their legal documents on fire safety," he told reporters while visiting the site of the blaze.

According to a 2012 study by Bangladesh University of Engineering and Technology, most high-rise buildings in 15-million-strong Dhaka have inadequate fire safety measures.

"We found only two buildings fully compliant," BUET professor Mehedi Ahmed Ansari said of the survey on 112 buildings, adding that some they looked at were little more than "death traps".

Fire department director Shakil Newaj said they had warned the FR Tower management to improve fire safety standards, but they did not pay heed.

"Fire safety measures in the building were very weak. There were no sprinklers. Fire exits existed only in name," Newaj told AFP.

A June 2010 fire in the nearby neighbourhood of Nimtoli, one of the most densely populated districts of the capital, killed 123 people.

In November 2012, a fire swept through a nine-story garment factory near Dhaka killing 111 workers. An investigation found it was caused by sabotage and that managers at the plant had prevented victims from escaping.