Bangladesh police fired tear gas and swung batons as thousands of garment workers demonstrated for better wages for a fourth day Wednesday, shutting down factories on the outskirts of the capital. 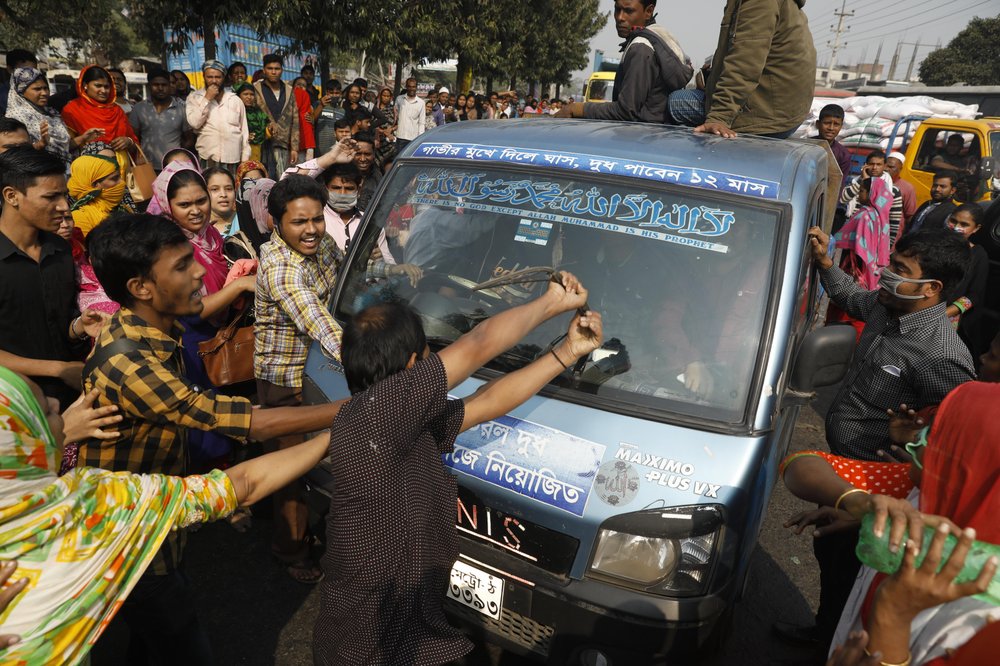 Bangladeshi garment workers vandalize a vehicle during a protest in Savar, on the outskirts of Dhaka, Bangladesh, Wednesday, Jan. 9, 2019. (Photo: AP)

The Daily Star newspaper said one protester was fatally shot and three dozen others were injured in clashes with police.

Police fired tear gas and water cannons to prevent demonstrators from blocking the road leading to Dhaka’s Hazrat Shahjalal International Airport. Workers responded by hurling bricks at police and setting vehicles ablaze.Bangladesh’s garment industry generates around $30 billion in exports a year, making it the second largest in the world after China. It makes products for big-name fashion retailers including Zara, H&M and Uniqlo.

For months, workers have been demanding a higher minimum pay than what the government of Prime Minister Sheikh Hasina has proposed.

"They give us nothing. Right now, our salaries are the same as for helpers hired to assist us," Begum said.

Hasina's ruling Awami League-led coalition swept a general election on Dec. 28 amid opposition complaints of voter intimidation and vote rigging. Hasina was sworn in Monday for a record third consecutive term as head of government.

The booming garment industry has been a pillar of Hasina's economic development strategy for Bangladesh, where annual per capita income has nearly tripled since 2009 to $1,750.

Under Hasina, the level of extreme poverty — classified as under $1.25 per day — has dropped from 19 percent of the population to less than 9 percent in the last decade, according to the World Bank.