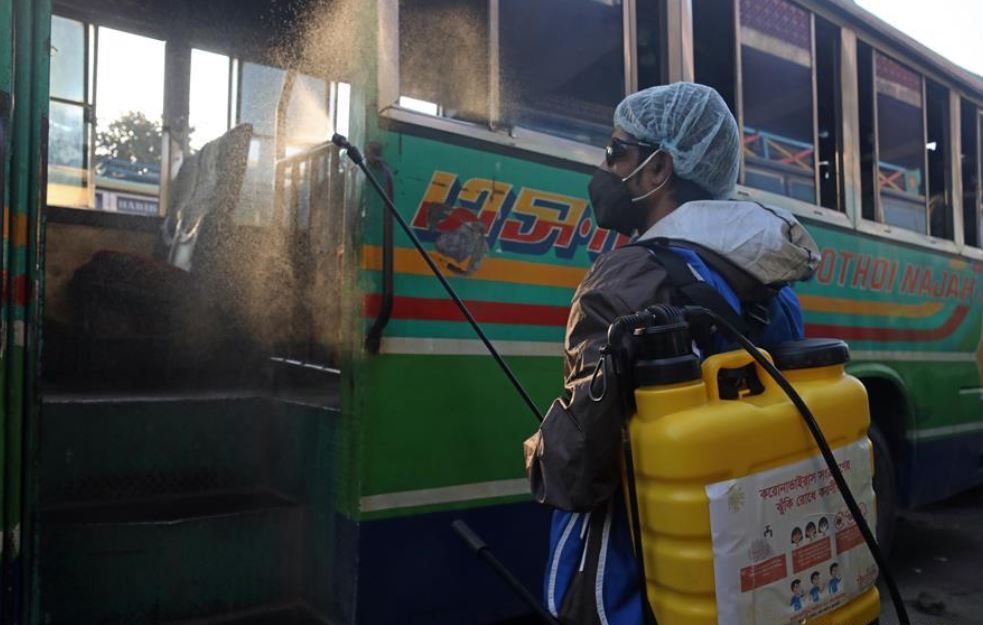 A worker sterilizes a bus in Dhaka, Bangladesh, on March 19, 2020. A total of 17 cases of COVID-19 have been confirmed in Bangladesh with three more testing positive for the virus on May 28, 2020. (Photo: Xinhua)

DHAKA (Xinhua) -- Offices, businesses and transports resumed in Bangladesh, May 31, on a limited scale after being suspended for over two months following the COVID-19 outbreak.

On Sunday morning in capital Dhaka, train stations and ferry terminals were a bit crowded as people began returning to the city.

Although offices opened, the presence of staff and employees were thin as many of them reportedly availed permissions to work from home in light of the virus concerns.

The Bangladeshi government decided on Thursday to allow offices and businesses to resume under strict guidelines from May 31.

According to the government's gazette notification, the limited reopening will remain in force until June 15, while the educational institutions would, however, remain closed.

The government declared a general holiday from March 26 and later extended the shutdown in phases till May 30 to quell the spread of the COVID-19 pandemic.

Prime Minister Sheikh Hasina said on Sunday that her government has taken measures to ease the plight of people and businesses affected due to COVID-19.

She made the remarks while announcing a new stimulus package to waive 20 billion taka (236 million U.S. dollars) bank interest of the people affected badly by the nationwide lockdown.

Since March 8, the virus has spread to nearly every Bangladesh district and the number of cases rose to 47,153 with 650 deaths so far.