A passenger train derailed in Bangladesh on Monday, killing at least five people and injuring more than 100, and there could be more casualties inside two carriages that fell into a canal, according to local police. 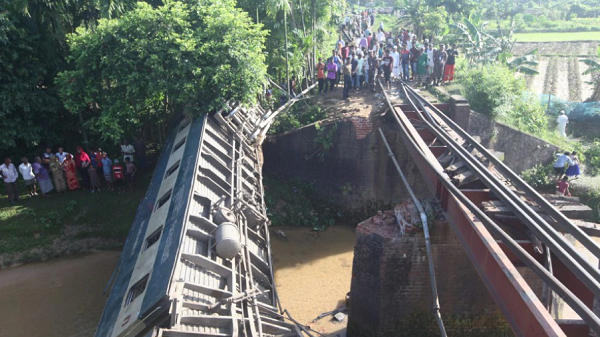 The train is on its way from Dhaka to the eastern city of Sylhet when the derailment occurs in the Kulaura outskirt of Moulvi Bazar, Bangladesh, June 24, 2019. (Photo: CGTN)

The train was crossing a bridge on its way to Dhaka, the capital city of Bangladesh, from the eastern city of Sylhet when it went off the rails, police superintendent Mohammad Shahjalal said.

There could be more bodies in the carriages that were submerged in the canal, Shahjalal added.

The derailment occurred near the Moulavi Bazar district, 210 kilometers (130 miles) east of Dhaka.

Railway accidents occur relatively frequently in Bangladesh, many of them at unsupervised crossings.