Bank CEO pleads not guilty in bid to get Trump post

A banker who prosecutors say tried to buy himself a senior post in President Donald Trump's administration by making risky loans to former Trump campaign chairman Paul Manafort pleaded not guilty Thursday to a financial institution bribery charge as his lawyer said he's done nothing wrong. 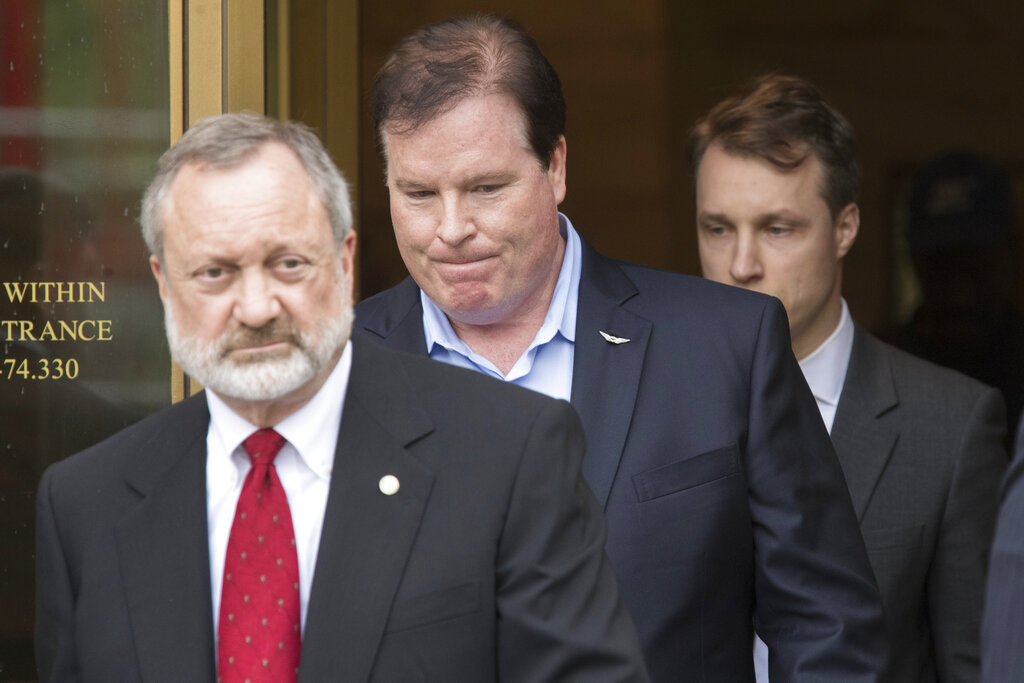 Calk, who lives in Chicago where The Federal Savings Bank is headquartered, was told by Magistrate Judge Debra Freeman to have no contact with bank employees except for his brother until prosecutors next week submit a list of individuals he cannot communicate with.

The small bank where Calk was CEO when he allegedly carried out the scheme said in a statement that Calk already had no involvement with the bank and is on a leave of absence.

In a statement, Calk attorney Jeremy Margolis said Calk will be exonerated on the "baseless isolated charge." He called the arrest a "travesty."

He said the bank his client founded and Calk were "victims of Mr. Manafort's ongoing fraud. Mr. Calk did not commit any offense with him."

Another defense lawyer, Daniel Stein, said outside court: "These loans were simply not a bribe for anything."

"The Special Counsel and a federal judge have determined that The Federal Savings Bank was a victim of Mr. Manafort's crimes," the bank said in a statement, adding it isn't accused of "any wrongdoing."

Federal prosecutors described the charge in a release, saying Calk abused his bank position by approving $16 million in high risk loans that were ultimately downgraded by the bank's primary regulator.

"His attempt at petitioning for political favors was unsuccessful in more ways than one — he didn't get the job he wanted, and he compromised the one he had," Sweeney added.

If convicted, he could face up to 30 years in prison.

Manafort lobbied Trump's son-in-law, Jared Kushner, to consider Calk for Secretary of the Army, according to emails from the weeks leading up to the 2016 election shown to jurors at Manafort's tax evasion and bank fraud trial last year.

According to trial evidence, Manafort passed along Calk's resume to Kushner in a Nov. 30, 2016, email, along with two other names of people he said "should be a part of the Trump administration."

Manafort wrote that the individuals would be "totally reliable and responsive to the Trump White House."

He also said Calk was "strong in defense issues, management and finance."

Kushner responded, "On it!"

Calk was formally interviewed for the position of under secretary of the Army in early January 2017 at the Presidential Transition Team's Trump Tower offices, prosecutors noted.

But Calk never got an administration post, though he did approve Manafort's loans.

Manafort received a $9.5 million cash-out refinance from Calk's bank on November 2016 and an additional $6.5 million construction loan on a Manafort property in New York in January 2017.

Prosecutors said Calk began in July 2016 to exploit his position as head of the bank and its holding company, knowing Manafort urgently needed loans to avoid foreclosure proceedings on multiple properties he and his family owned.

Calk himself was not summoned by federal prosecutors to testify in Manafort's case.

Instead, executives who worked under Calk at The Federal Savings Bank testified he began green-lighting more than $16 million in loans after he expressed interest in joining the Cabinet if Trump won the 2016 election.

Testifying under an immunity agreement, James Brennan, who was a vice president of the bank at the time, said Calk overruled bank executives who rejected Manafort's loan for "inconsistencies."

The loan "closed because Mr. Calk wanted it to close," Brennan said.

The federal jury was unable to reach a verdict on the bank fraud charge related to Calk, but Manafort was convicted on eight other counts in the case. Manafort later acknowledged guilt in all the bank-related charges as part of a deal with the special counsel's office.

Manafort is serving a 7½ year sentence after his convictions on 10 charges alleging multiple crimes, including bank and tax fraud, misleading the government over his foreign lobbying work and encouraged witnesses to lie on his behalf. He also faces an indictment in New York charging him with state crimes , including a residential mortgage fraud scheme.