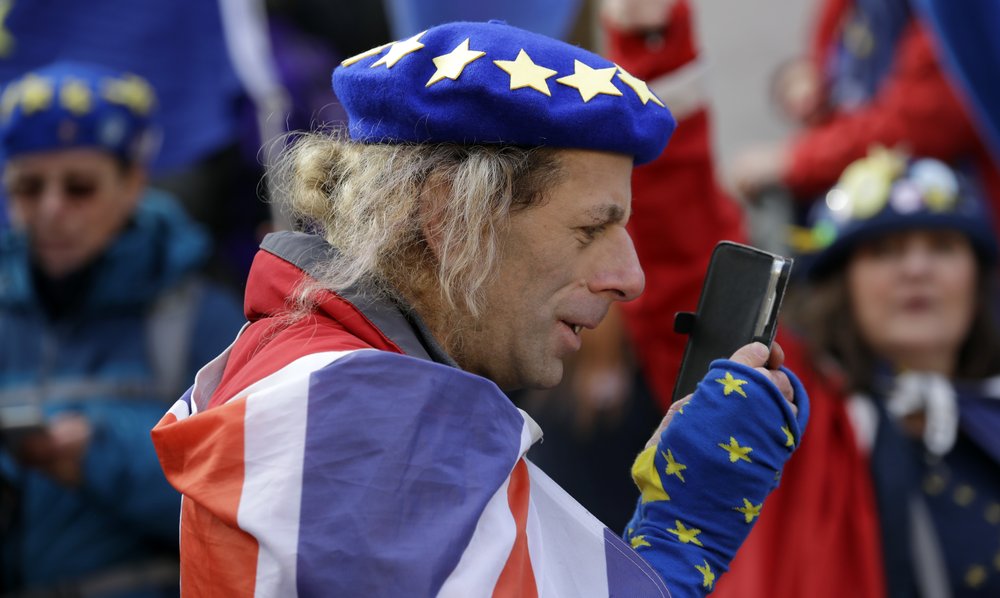 Anti Brexit campaigners demonstrate in Westminster in London, Monday, Nov. 19, 2018. The EU nations and Britain are still negotiating the outline text of a draft Brexit deal, setting out their future relationship which will have to be ratified by both the British and the European Parliaments. (Photo: AP)

Bank of England Governor Mark Carney gave a guarded welcome to Prime Minister Theresa May’s Brexit deal as he confirmed the bank would deliver its verdict on the agreement next week.

Addressing lawmakers Tuesday, Carney said the withdrawal agreement would eliminate some of the uncertainty that has surrounded the British economy since the country voted to leave the EU in June 2016. It would provide businesses the platform to plan and invest.

In his first public comments since last week’s draft agreement on Britain’s withdrawal from the EU, Carney also confirmed that the Bank of England would publish next week its assessment of the deal and also what would happen if Britain crashes out of the European Union with no deal. The assessments will be sent to Parliament’s Treasury Select Committee Nov. 29, “in good time before any parliamentary vote.”

May is aiming to get the backing of EU leaders on Sunday for the withdrawal deal her government agreed on with the EU’s executive Commission. She is also looking to flesh out a political declaration about the future relationship with the EU.

May’s deal has been met with widespread opposition within the British parliament, raising the prospect that it might be voted down. If that happens, Britain could end up leaving the EU without a deal, though many lawmakers are pushing for another Brexit referendum.

May is hoping that independent assessments from the likes of the Bank of England will help her deal through the parliamentary vote, expected in December, especially if the bank says that a no-deal outcome could to lead to recession.

The opposition Labour Party, which is against the deal, hopes that a defeat for May could lead to a general election. And if it doesn’t, it could reportedly back calls for another referendum to reconsider Brexit altogether.

Part of the deal involves Britain following EU rules after Brexit day on March 29, until the end of 2020. There’s scope for that transition to be extended, providing businesses more time to adapt.

He repeated his view that there was an “uncomfortably high” risk of a disorderly Brexit, in which tariffs would be placed on exports, border checks reinstalled, and restrictions imposed on travelers and workers.

“There would be an economic shock in Europe as well, and particularly in Ireland,” he warned.

Carney was not alone in his warnings.

The bank’s chief economist, Andy Haldane, told lawmakers that Brexit uncertainty is the “single largest headwind” to the economy and that the impact has become “somewhat greater” in recent weeks amid talk of a no-deal Brexit.

As a result, he said, British economic growth is set to be “somewhat weaker” in the fourth quarter from the quarterly rate of 0.6 percent recorded in the third.

Michael Saunders, another rate-setter at the bank, said most businesses were “not prepared” for a no-deal Brexit and in fact “don’t really know how to prepare.”

Saunders also warned that whatever certainty emerges, much of the business investment lost since the referendum may never return. Since then, business investment in Britain has only risen by 1 percent, the slowest rate by far among the Group of Seven industrial nations.

“The withdrawal agreement may give us back some of that but I suspect much of that is a permanent loss,” he said.