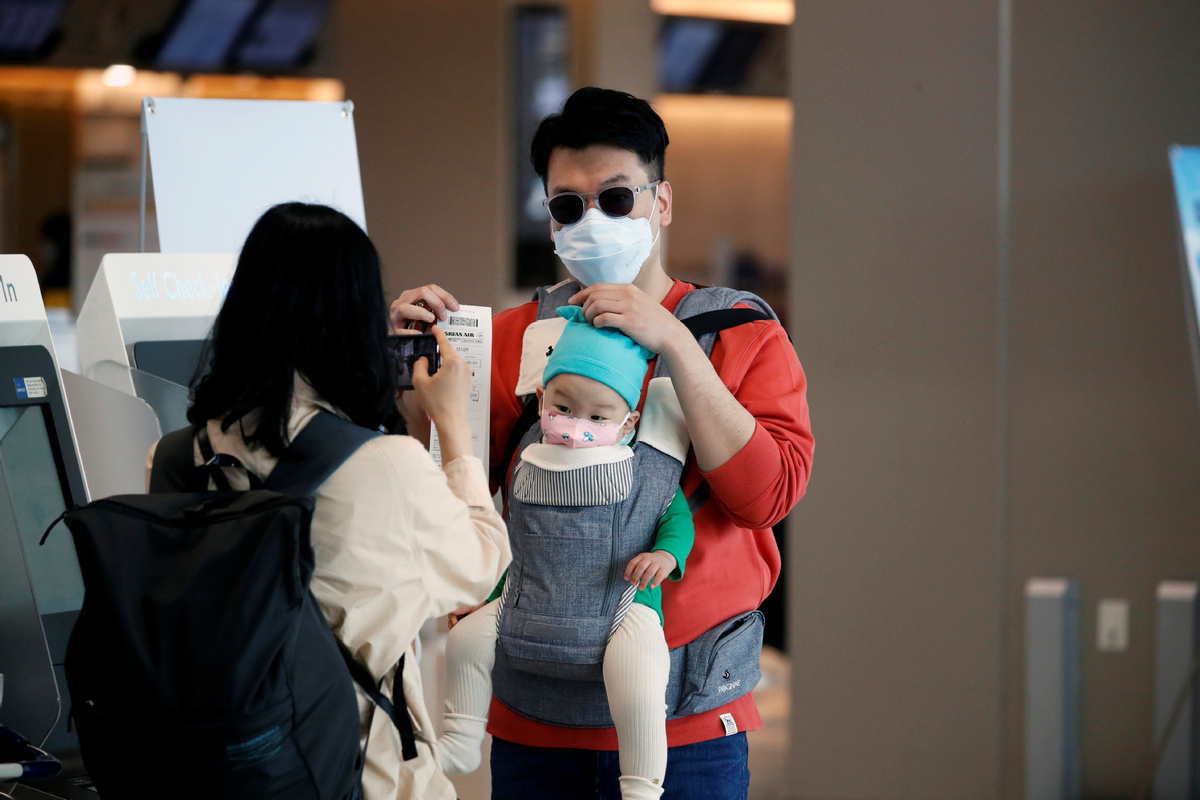 A woman wearing a mask to avoid the spread of the coronavirus disease (COVID-19) takes a photograph of her husband and child after checking in at Gimpo international airport in Seoul, South Korea, May 1, 2020. (Photo: Agencies)

SEOUL－South Korea's capital has ordered to close all clubs and bars after a burst of new cases sparked fears of a second coronavirus wave as President Moon Jae-in urged the public to remain vigilant.

The country reported 34 new cases on Sunday, its largest daily increase in a month, taking the total to 10,874. More than two dozen cases were linked to a 29-year-old man who tested positive after spending time at five clubs and bars in Itaewon last weekend.

Health authorities have warned of a further rise in infections, with about 7,200 people estimated to have visited the five establishments identified.

Moon said on Sunday that the fresh infection cluster had "raised awareness that even during the stabilization phase, similar situations can arise again anytime".

Elsewhere in Asia, the Japanese government on Friday eased access to coronavirus tests and indicated that a new test supplementing the current test could be approved next week, as the country's confirmed cases rose to 16,480 on Sunday.

The Health Minister Katsunobu Kato told parliament on Friday the government's review of antigen test kits, which are simpler and quicker to conduct, will be completed next week for possible approval.

The new test will be covered by the country's public insurance system.

In Myanmar, the military on Saturday declared a cease-fire from Sunday to Aug 31 to help fight the virus.

The cease-fire will be applicable to the areas except for those where armed organizations named as terrorists by the government are based, a statement from the Office of the Commander-in-Chief of Defence Services said.

In Malaysia, the government extended the time frame for movement and business curbs by another four weeks to June 9, amid a gradual reopening of economic activity stunted by the pandemic.

Existing rules under a conditional movement control order remain in place until the new expiry date in June, which include practicing strict hygiene and social distancing, Prime Minister Muhyiddin Yassin said on Sunday.

Last week, businesses were allowed to resume work as usual, albeit under strict health guidelines. Malaysia had reported 6,656 cases with 108 deaths as of Sunday.

In Pakistan, the authorities began lifting the weekslong lockdown that was enforced to curb the spread of the virus, as authorities reported another big rise of 1,637 cases to 27,474 with 24 new deaths.

Last week Prime Minister Imran Khan said he was ending the lockdown in phases because his government was unable to financially help those millions of people who rely on their daily earnings to survive and feed their families.

In Africa, South Africa saw a continued spread of COVID-19 with more than 500 new cases being reported on Saturday after easing of restrictions.

The country reduced level-five restrictions to level-four on May 1, allowing the partial reopening of some businesses, and Health Minister Zweli Mkhize said the approach must ensure a differentiation in the levels of lockdown. South Africa had has a total of 9,420 confirmed cases by Sunday.

Benin on Saturday conducted mass coronavirus testing of teachers ahead of the reopening of schools, as part of a plan to loosen measures against the pandemic. The West African country of 11 million is set to end six weeks of travel restrictions to key cities and allow some students back to classrooms from Monday.