WORLD Barcelona mayor pleads for violence in Catalonia to stop

Barcelona mayor pleads for violence in Catalonia to stop 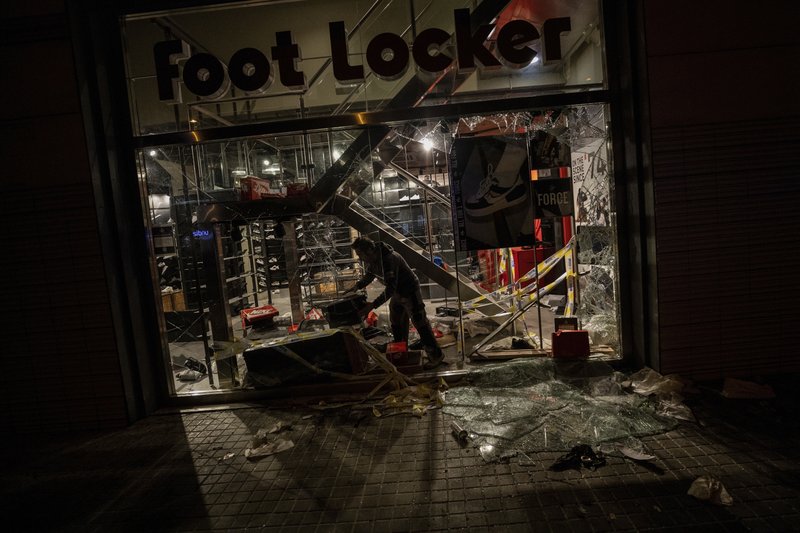 “This cannot continue. Barcelona does not deserve it,” Mayor Ada Colau told reporters, adding that Friday’s violence was the worst so far.

Police are bracing for more protests in the coming days.

Radical separatists have clashed with police every night in Barcelona and other Catalan cities following huge peaceful protests by people angered by Monday’s Supreme Court verdict that sentenced nine separatist leaders to prison for their roles in a failed 2017 secession attempt.

More than 500,000 people gathered in downtown Barcelona on Friday in a massive show of support for the secession movement that is backed by roughly half of the wealthy northeastern region’s 5.5 million voters.

Before night fell, several hundred masked youths had surrounded the headquarters of the National Police and started a street battle that raged into the night in Barcelona, a popular tourist destination.

“The images of organized violence during the night in Barcelona have overshadowed the half a million people who demonstrated in a peaceful and civic manner to show they rejected the verdict,” said Catalan interior chief Miquel Buch, who oversees the regional police.

Rioters have burned hundreds of trash bins and hurled gasoline bombs, chunks of pavement and firecrackers, among other objects, at police. They have used nails to puncture the tires of police vans.

Outnumbered officers in riot gear from both Catalonia’s regional police and Spain’s national police used tear gas and water cannon for the first time on Friday night to battle the rioters.

Residents and tourists have run for cover.

“It has been quite scary,” Deepa Khumar, a doctor from Toronto visiting for a medical conference, said Friday. “This place, it looks like a war zone.”

Authorities say over 500 people have been hurt this week, including protesters and police, while police have made over 150 arrests.

Spanish Interior Minister Fernando Grande-Marlaska said Saturday that 101 police officers were injured on Friday alone and that 264 police vehicles have been severely damaged in the week’s riots.

“We have gone five days in which there has not been a firm condemnation of violence” by Catalan leader Quim Torra, Grande-Marlaska said.

Torra has called on protesters to respect the non-violent tenets of the separatist movement that has surged over the past decade.

But on Saturday Torra and his vice president, Pere Aragonès, used a televised address mostly to criticize the Supreme Court verdict. Aragonès also insinuated that the national police, which are controlled by Madrid, had acted too aggressively with protesters.

Torra demanded to meet Spain’s Prime Minister Pedro Sánchez to push his agenda for secession and freedom for the prisoners.

The prime minister’s office responded that “the government of Spain has always been in favor of dialogue, but within the confines of the law.”