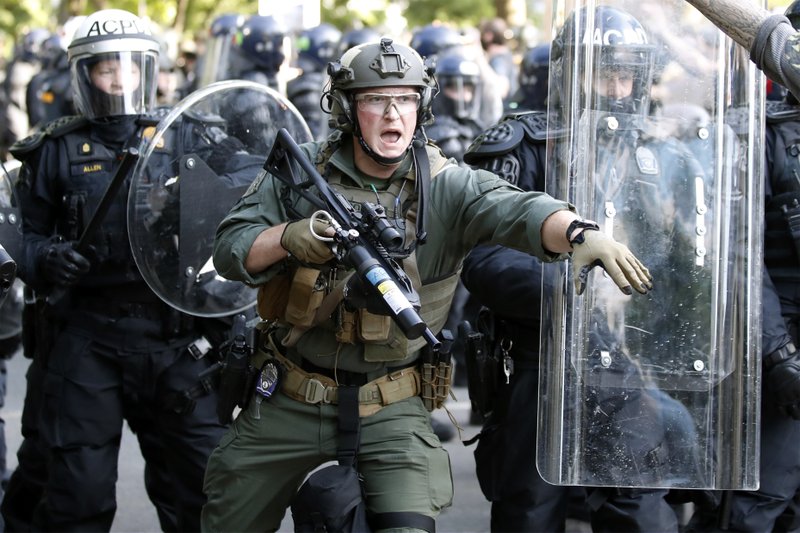 Police begin to clear demonstrators gathered as they protest the death of George Floyd, Monday, June 1, 2020, near the White House in Washington. Floyd died after being restrained by Minneapolis police officers. (Photo: AP)

U.S. officials vowed to “maximize federal law enforcement presence” in the nation’s capital after days of violent demonstrations led to fires across Washington and left scores of businesses with broken windows and dozens of police officers injured.

In a call with governors Monday, President Donald Trump and Attorney General William Barr also encouraged more aggressive action against those who cause violence during protests across the country following the killing of George Floyd, a black man who died after a white Minneapolis policeman pressed his knee into his neck for several minutes even after Floyd stopped moving and pleading for air. The demonstrations have turned violent in several cities, with fires ignited in Lafayette Park across from the White House.

The comments from Trump, Barr and other federal officials appeared aimed at avoiding similar scenes Monday night. But there were also questions about whether using more aggressive law enforcement measures against demonstrators protesting police brutality would only increase tensions.

Barr told the state leaders that law enforcement officials must “have adequate force” and “go after troublemakers.”

“Law enforcement response is not going to work unless we dominate the streets,” Barr said.

Trump said he was “taking immediate presidential action to stop the violence and restore security and safety in America.”

The president urged governors to deploy the National Guard, which he credited with helping calm the situation Sunday night in Minneapolis, and demanded that similarly tough measures be taken in cities that also experienced spasms of violence, including New York, Philadelphia and Los Angeles.

“Mayors and governors must establish an overwhelming law enforcement presence until the violence has been quelled,” Trump said. “If a city or state refuses to take the actions that are necessary to defend the life and property of their residents, then I will deploy the United States military and quickly solve the problem for them.”

Minutes before Trump spoke Monday evening in the Rose Garden of the White House, police and members of the National Guard took aggressive action, using tear gas and flash bangs, to move back peaceful protesters who were outside Lafayette Park, across from the White House.

After speaking in the Rose Garden, Trump then walked slowly out of the White House gates, senior aides and security with him, across the park to the landmark St. John’s Church, where every president, including Trump, has prayed. It had been damaged Sunday night in a protest fire.

Trump then stood alone in front of cameras and raised a Bible — and declared, “We have a great country,” he said. “Greatest country in the world.”

Officials in Arlington, Virginia, later ordered the county’s police, who were helping with crowd control in Lafayette Square under a mutual aid request from U.S. Park Police, to leave Monday night. Arlington County Board Chair Libby Garvey tweeted that she was “appalled” that the mutual aid agreement was “abused to endanger their and others safety for a photo op” by Trump.

A statement from the county said it was “re-evaluating the agreements that allowed our officers to be put in a compromising position that endangered their health and safety, and that of the people around them, for a purpose not worthy of our mutual aid obligations.”

A Justice Department spokesperson declined to comment when asked whether Barr was involved in the decision to use tear gas on protesters outside the White House. A U.S. Park Police spokesperson did not immediately respond to a request for comment.

Between the protests and the response to the coronavirus pandemic, the National Guard has been deployed at its highest level in recent history, surpassing the number of troops sent to the Gulf Coast during Hurricane Katrina in 2005. More than 66,700 soldiers and airman have been activated — 45,000 to assist with the pandemic and more than 17,000 to help with the protests.

Other law enforcement resources are also being mobilized.

The Justice Department deployed the U.S. Marshals Service and agents from the Drug Enforcement Administration to supplement National Guard troops in Washington on Sunday. By midnight, Barr had ordered the FBI to deploy its Hostage Rescue Team, an elite tactical unit, to the streets of the nation’s capital, a senior Justice Department official said.

Barr was traveling around Washington on Monday night to observe the protests, according to the senior Justice Department official, who would not discuss the matter publicly and spoke on condition of anonymity.

The U.S. Park Police and Secret Service have had dozens of officers out in riot gear in Washington for the last few nights, in addition to the Metropolitan Police Department. U.S. Customs and Border Protection was also sending officers, agents and aircraft around the country to assist other law enforcement agencies “confronting the lawless actions of rioters,” the agency said. The officers were being deployed in several states, though the official declined to provide specific details, citing security concerns.

Several major cities have enacted curfews, and District of Columbia Mayor Muriel Bowser set a 7 p.m. curfew for Monday and Tuesday. Violent demonstrators ignored the 11 p.m. curfew the night before as they set buildings and trash cans on fire and broke into stores to steal items from the shelves.

Most of the protesters have been peaceful and tried to discourage violence. Trump, Barr and others have tried to blame some of the civil unrest on left-wing extremist groups, including antifa, and other “anarchists.” Short for anti-fascists, antifa is an umbrella term for far-left-leaning militant groups that resist neo-Nazis and white supremacists at demonstrations.

The FBI is using its network of regional joint terrorism task forces to “identify criminal organizers,” and federal prosecutors across the country have been instructed to share information and utilize federal riot, arson or terror statutes against any “violent radical agitators” who attempt to hijack protests to cause destruction.

The Justice Department has vowed to treat the “violence instigated and carried out by antifa & other similar groups” as domestic terrorism. Although there isn’t a specific federal domestic terrorism statute, prosecutors could charge other offenses and seek enhanced sentencing.

Between 600 and 800 National Guard members from five states — Delaware, New Jersey, New York, Ohio and Utah — are being sent to D.C. to provide assistance, senior Defense Department officials said. Those troops are either already on the ground or will arrive by midnight.

In addition, officials said that soldiers from Fort Bragg, North Carolina, and Fort Drum, New York, were heading to D.C. and would be based outside the city in case they are needed. They would be prepared to respond, but the officials said they are hopeful those troops will not be needed. If they are sent in, they are not expected to be conducting any law enforcement. The officials declined to say how many active-duty troops were en route.