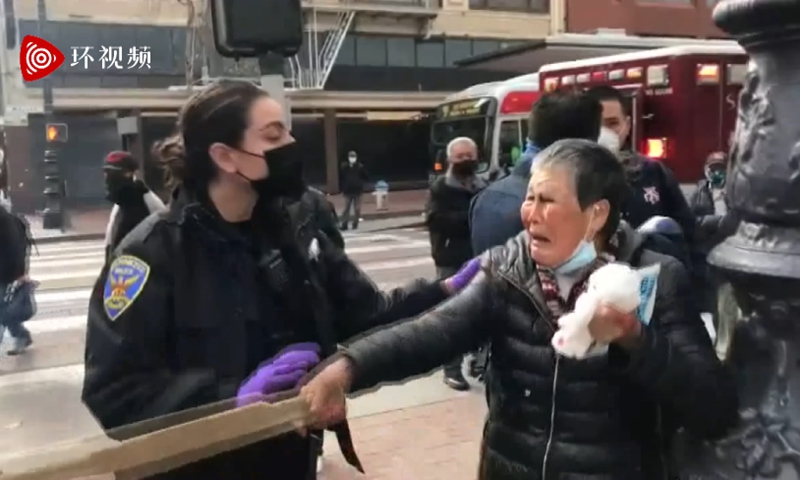 "I absolutely cannot be bullied by bad guys!"

After being punched by a burly middle-aged white man on the street and then fearlessly fighting back, a 76-year-old Chinese granny has returned to her home with serious injuries, and she said she did not regret her bravery in fighting back when facing the discrimination motivated by hatred against Asian people in the US.

Her family told the Global Times that the woman was severely wounded and emotionally traumatized, waiting for a police investigation and further questioning. The case attracted worldwide attention on the increase of violent attacks against Asians, as concerns of racism are growing among Chinese people in the US following the death of six Asian women in an Atlanta shooting.

The elderly Chinese American woman was attacked on Wednesday morning in San Francisco by a man in his 30s, defending herself bravely against her attacker using a wooden stick. Her bravery won praise over the internet, with many netizens saying this best characterized the philosophy of "don't mess with a Chinese nanny."

The Global Times learned from the woman's son-in-law John Chen (Chen Dehe）that 76-year-old Xie Xiaozhen was badly hurt. There was a hemorrhage from her eye socket that had as yet not been controlled.

The man is suspected to have attacked Xie while fleeing a security guard after assaulting an 83-year-old Asian man minutes earlier, as abc7 reported.

"We can't believe that an unarmed elderly man was attacked just a block away from her home," John Chen told the Global Times.

Chen visited Xie just before the interview with the Global Times, saying that although Xie is currently in stable condition, the swelling in her left eye has still not subsided and she still has a hemorrhage coupled with impaired vision.

According to Chen, Xie was attacked while out for a walk. "She was waiting for the traffic light when she suddenly heard someone aggressively yelling 'Chinese! Chinese,' and before she could react, she had already been punched in the face," Chen said.

Although Xie bravely defended herself during the attack, she was traumatized, exhibiting an unstable mood and slurred speech, Chen added.

In a video that captured the aftermath shot by KPIX-TV, based in San Francisco, the bleeding attacker ended up handcuffed to a stretcher.

Xie's face and eyes also appeared to have sustained significant trauma, with bruises around her eyes. She stood beside the police, holding an ice pack to her head.

As the video showed, Xie sobbed and berated the assailant, brandishing what appeared to be a wooden stick at him as he was led away, asking him in Cantonese "Why did you hit me?"

The incident happened at around 10:30 am, according to media reports. Both the attacker and the victim were later taken to hospital for treatment.

As CBS reported, San Francisco police did not disclose a motive behind the attack and it was not clear whether the victim's race had anything to do with the assault. They are working to determine if racial discrimination was a factor.

After the video went viral on social media, netizens around the world condemned the attacker, with numerous comments praising the elderly woman's bravery.

According to Chen, Xie was very happy to learn that she was receiving global attention and believed that Chinese and other Asians in the US should not be weak in the face of discrimination and targeted violent crimes, but should stand up and fight back.

Chen said Xie has always been a zero-tolerance person when it comes to racial discrimination and would definitely speak up when she sees someone insulting Chinese people in public.

Chen pointed out that recently there have been an increased number of incidents of discrimination and violent crimes against Chinese people in the US, especially targeting the elderly, women, and other vulnerable groups.

"My father-in-law said now he is afraid to leave the house for the next half a month," Chen said, adding that their family will actively defend Xie's rights and take care of her for the next period of time.

Hate crimes against Asian Americans went up 150 percent in 2020 in the San Francisco area, and a spate of attacks on elderly Asians has made many people afraid of going outdoors, as CBS reported.

Six of the eight people killed in the three shootings in Atlanta were Asian, raising concerns that they were targeted as well, media reported.