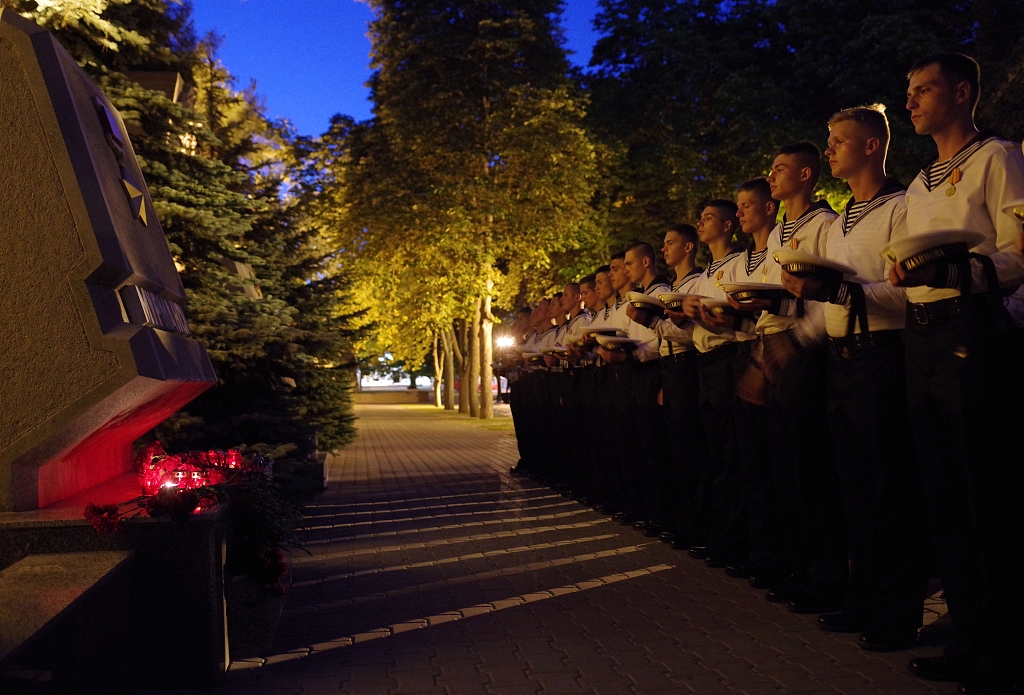 Sailors stand in formation next to the monument to the city of Murmansk as they commemorate 14 submariners who died on Monday, July 1, after the fire broke out aboard the navy research submarine of the Russian Northern Fleet, in Sevastopol, Crimea, Russia. (File photo: VCG)

MOSCOW, July 4 (Xinhua) -- A fire in the battery compartment and its spread caused the deadly incident on a Russian deep-water apparatus on Monday, while the nuclear reactor on board was not affected, Russian Defense Minister Sergei Shoigu said Thursday.

"The nuclear reactor on this vessel is completely isolated and deserted. The crew carried out all the necessary procedures to protect the installation, so it is fully operational," Shoigu told Russian President Vladimir Putin.

"This allows us to hope that the vessel may be restored in a fairly short time," Shoigu said, according to a Kremlin transcript of the conversation.

Shoigu said that his ministry was taking care of the families of the 14 deceased submariners in accordance with Putin's order and providing them with all the necessary assistance.

Putin instructed Shoigu to submit proposals on state awards to the crew of the underwater vessel.

The Russian Defense Ministry announced on Tuesday that 14 submariners were killed by combustion gas in a fire on a deep-water research apparatus in Russian territorial waters.

Later in the day, Putin summoned Shoigu and ordered him to go to the Severomorsk base of Russia's Northern Fleet in person to ensure a thorough investigation.

The submariners on board were unique military specialists and highly skilled professionals who conducted an important survey of the Barents Sea floor, Shoigu said Wednesday at a meeting with members of an investigative commission in Severomorsk.

Some details about the submersible are classified and will not be made public, Kremlin spokesman Dmitry Peskov said on Wednesday.