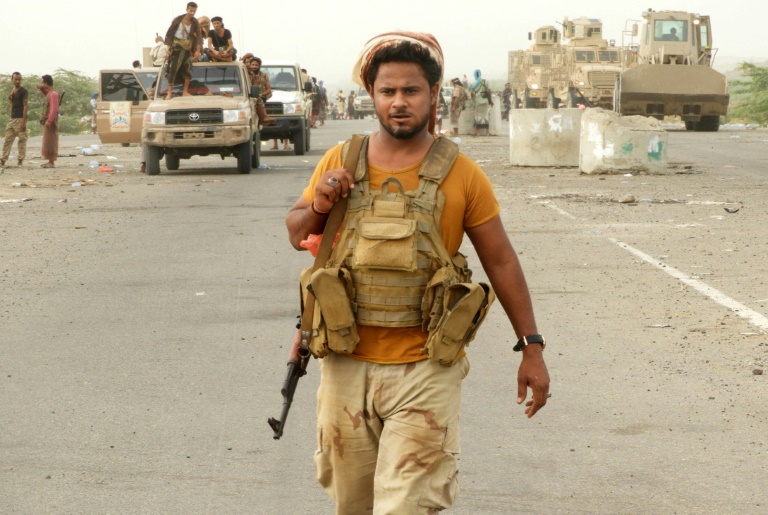 Yemeni pro-government forces were locked in heavy fighting with rebels that left 39 people dead on Thursday, as they pressed a Saudi and UAE-backed offensive to retake the key aid hub of Hodeida.

The clashes came as the UN Security Council prepared to hold urgent talks on the military operation, which Russia warned could have "catastrophic consequences" for the entire country.

Yemeni forces backed by a Saudi-led coalition launched an assault on Wednesday to retake the port city of Hodeida, which has been controlled by the Iran-backed Huthi rebels along with the capital Sanaa since 2014.

The Huthis suffered 30 fatalities on Thursday in clashes near Hodeida airport south of the city, medical sources told AFP.

Nine pro-government troops were killed in the same area, the medics said. Military sources said the deaths were caused by mines and snipers.

The UAE, a driving force in the coalition, said four of its troops were killed on the first day of the offensive Wednesday including at least one navy officer.

The Huthis earlier said they had struck a coalition ship off the coast of Hodeida with two missiles.

"We still have seven ships in the port. The work in the port is normal. And we have five other ships standing by waiting outside to enter," port director Dawood Fadel told AFP.

Riyadh and Abu Dhabi, which intervened against the Huthis in 2015 with the goal of restoring Yemen's government to power, have pledged to ensure a continuous flow of aid to the Arab world's poorest nation.

Abdullah al-Rabeeah, the head of Saudi Arabia's King Salman Aid and Relief Centre, in a press conference Wednesday night sought to allay the fears of the international community.

"This coalition will start to operate an air and sea bridge, as well as land, to transport aid and medical supplies, food, shelter and fuel other basic necessities to Hodeida province," he told reporters.

International aid groups have long warned against an offensive on Hodeida because the port serves as the entry point for 70 percent of Yemen's imports, as the country teeters on the brink of famine.

"The attacks we have feared and warned against are no longer impending, but underway," the Norwegian Refugee Council's acting country director Christopher Mzembe said Thursday.

"As airstrikes intensify and frontlines move closer to Hodeida city, so does the very real threat of harm to civilians in Hodeida," he said, urging the warring parties to return to political negotiations.

According to the NRC, nearly 15 percent of Yemen's suspected cholera cases have occurred in Hodeida governorate.

The international aid group warned of a "high risk of a second outbreak" should water supplies be disrupted.

The UN Security Council has raised alarm over the military operation, which it says could cripple desperately needed deliveries of commercial goods and humanitarian aid to millions in the aid-dependent country.

"The offensive against Hodeida risks triggering catastrophic consequences for all of Yemen," Russia's foreign ministry said in a statement on Thursday ahead of the Security Council meeting later in the day.

The population may find itself "on the brink of death" if the fighting leads to a blockade of the port, it said.

Moscow added that the assault would deal a major blow to the "prospects of a political settlement".

Yemen's internationally recognised government earlier pronounced negotiations had failed to force the rebels from Hodeida, and a grace period for UN-led peace efforts was over.

Aides to the Yemeni president, who has spent much of the war in exile in Riyadh, said he was preparing Thursday to visit the southern port city of Aden, where the government set up its base after it was ousted from Sanaa.

"President Abedrabbo Mansour Hadi will arrive to the interim capital of Aden in the coming hours ... from Saudi Arabia, along with a number of his advisors and senior officials," a senior Yemeni government source told AFP.