WORLD Be like Pharaohs, Egyptians are told in last-minute appeal to vote

Be like Pharaohs, Egyptians are told in last-minute appeal to vote 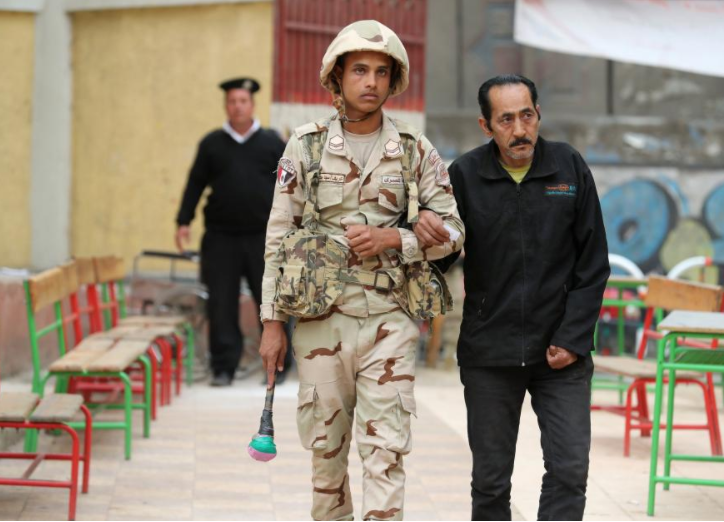 An elderly man is helped by an Egyptian army soldier as he arrives to cast his vote during the last day of the presidential election in Cairo, Egypt March 28, 2018 (Photo: Reuters)

Egypt’s three-day presidential election drew to a close on Wednesday with little sign that President Abdel Fattah al-Sisi would achieve the high turnout he wants, despite some voters reporting they had received payments to go to the polls.

With only a few hours before polls closed on Wednesday evening, the electoral commission issued a last-minute call for people to vote, hoping to boost the turnout figure that Sisi regards as vital to legitimizing his predicted victory.

Appearing on national television, Lasheen Ibrahim, head of the national election commission, told Egyptians: “Declare to the world that Egypt always makes history, for you are the Pharaohs, the makers of the civilization that amazed the world.”

“Oh great people of Egypt, complete the journey of the past two days as you have always presented the best example of faithful patriotism and stabbed the forces of evil in the chest,” he said.

Voting was later extended by one hour to 10 p.m.(2000 GMT), the state news agency MENA reported.

Sisi is running almost unchallenged after the other serious candidates were either arrested or intimidated, making turnout the main measure of his popularity with Egyptians who are widely expected to award him a second four-year term.

On the first two days of voting, turnout was about 21 percent, according to two sources monitoring the election.

No overall figure for Wednesday was immediately available, but Reuters reporters in Cairo and other cities found the numbers at polling stations appeared to have dropped.

A Western diplomat who visited four provinces reported seeing no ballot boxes more than half full and no long lines at polling stations.

Late yesterday turnout was between 15 and 20 percent, the diplomat told Reuters, requesting anonymity, with around 30 percent in some centres on Wednesday.

In Alexandria, an election observer said three polling stations had turnouts of 26.6, 32, and 33.75 percent by late afternoon.

At the last election in 2014, turnout was 47 percent, although Sisi won 97 percent of the overall vote.

Sisi said he wanted more opponents to stand, but instead faced just one who has been dismissed as a dummy candidate. Sisi said he had nothing to do with opposition candidates pulling out, and has urged people to vote in great numbers. The election commission pledged the vote would be free and fair.

In Cairo, some voters found it hard to voice enthusiasm.

Mostafa Abdel Kader, a 35-year-old delivery man, said he did not vote because there were no choices and he was “unhappy with the situation of the country”.

He expressed anger at some Sisi loyalists distributing food to persuade people to cast their ballots, saying he would not vote “for a box of food”.

Hussain al-Sayed, a 53-year-old tailor, did vote, although without much enthusiasm. “Sisi will win anyway, there is no one else ... we hope he is right. At least if we don’t see change, our children will.”

Sisi, who led the military overthrow of freely-elected Islamist President Mohamed Mursi in 2013, has promised security and stability and to revive the economy after unrest that followed a 2011 popular uprising.

Some voters interviewed by Reuters over the first two days of polling said they had been offered money, boxes of food, and services to cast their ballots.

“I’ve never voted before, and I didn’t intend to this time either,” a woman in Cairo’s working-class Ward estate said.

“I just went to vote so I can dip my finger in the paint and took the 50 pounds ($3),” she said, declining to give her name for fear of reprisals by authorities.

Another group of women, who also declined to be named, said they had been promised bags of food containing rice and vegetable oil in exchange for votes.

“They told me that if I voted and showed them (the ink on) my finger I will get a bag,” said one, who also declined to be named.

The women did not say who exactly had given them money or bags of goods.

Managers at a government financial institution gave employees half of Monday off and ordered them to vote, one employee told Reuters. Employees at the institution were told to “not come back without ink on their fingers” and had their hands inspected the next day, the employee said.

Officials at the election commission and the government’s foreign press centre did not respond to calls and Whatsapp messages requesting comment.

Some people needed no inducement to vote. Noha al-Nemr, voting in Cairo’s middle-class Mohandiseen district, said: “I voted for Sisi of course, because it’s enough that because of him, my family and I live in safety - even if there’s hardship.”

Incentives for voting were made more public in other areas.

In Beheira province, governor Nadia Abdou told Mehwar private TV channel on Monday: “Whichever municipality has the most votes, we will fix their water, sewage and electricity ... We will reward those people who came out in large numbers.”

Pro-government media portrayed failure to vote as a betrayal of Egypt.

Hosts of state-run radio programmes told listeners that if they did not vote, they would be “betraying the blood of the martyrs in Sinai”, a reference to a military campaign against Islamist militants in the northern Sinai Peninsula.